Blue jays get bad rep for a diet actually composed of insects, nuts 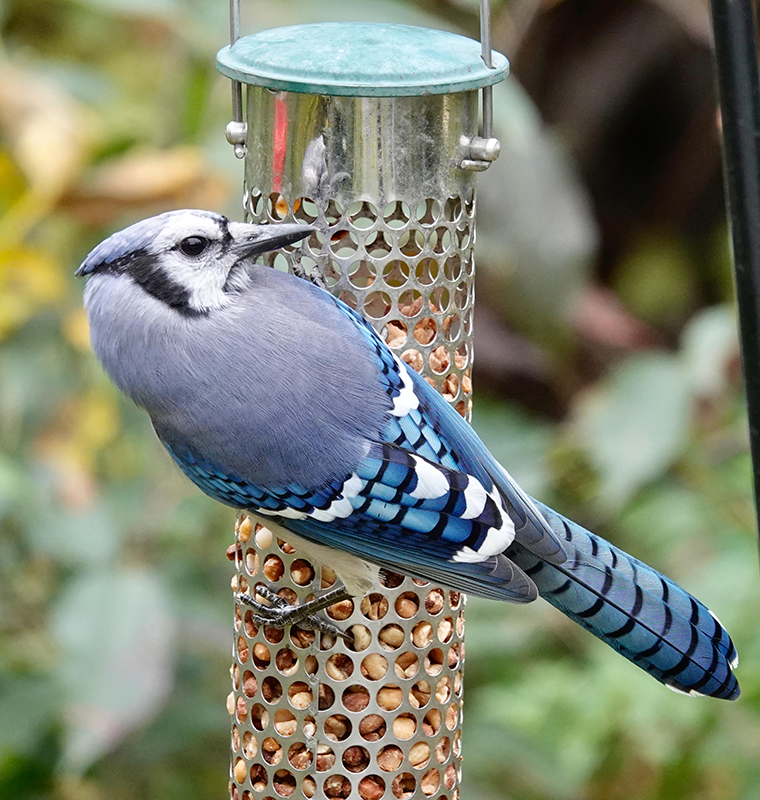 “Everything is nearly copacetic. I should be taking a nap, but I don’t have the energy to take one. Thanks to the magic of a nifty trash compactor, I was able to fit all the presents I’d bought into one small gift bag this Christmas. I’ve resolved to give up making New Year’s resolutions. Have you noticed that traffic has increased greatly in the neighborhood? I think it’s because my neighbor Still Bill bought a second pickup. Why he needs two, I don’t know. Still Bill is a pain in the ankle when he starts singing Elvis Presley songs. I like Elvis Costello more than Elvis Presley. I choose the lesser of two Elvises. This is one of the greatest days ever. I’ve learned that jelly doughnuts are the perfect breakfast.”

“Hugh Cares, the owner of the Breaking Bad Bakery.”

It looked like a fairyland. The trees were white. Hoarfrost is a deposition of ice crystals on objects like tree branches, wires and poles without the moisture passing through a liquid phase. It typically forms on clear, cold and calm nights. Hoar is a reference to the frosty coating and comes from the word hoary, meaning white or gray with age. Rime is similar, but different. It’s ice that forms when fog droplets freeze upon coming in contact with objects.

The temperature was supposed to drop. I think it was likely due to the cold. A little winter snarkiness there. Sorry. The night’s activities are often inscribed in the snow, but the snow had melted or hardened, making clues difficult to find. I picked up trash from the road ditch. Like a crow, I pick up shiny things from the ground.

Blue jays were having a collective cow as I walked. Jays are known to eat eggs and nestlings of other birds, but in a study of blue jay diets, only 1 percent of jays showed evidence of having eaten eggs or baby birds. The diets of the jays studied were composed of mostly insects and nuts. The oldest known wild blue jay was at least 26 years, 11 months old.

On the subject of studies, researchers discovered that opossums have impressive memories when it comes to food. Opossums were found to be better at remembering food locations than were cats, dogs, pigs and rats. Any mammal can get rabies, but the chance of finding rabies in an opossum is extremely slim.

“How fast do a deer’s antlers grow?” A white-tailed buck’s antlers begin growing in April and are fully grown by mid-August. Depending upon the source for this information, his antlers grow 1/4 inch to an inch per day.

“Have you ever heard of a Manitoba fly trap?” It’s a cone-shaped canopy/trap open at the bottom and standing on three legs. A black ball is suspended from its center. Horse or deer flies are attracted to the black sphere and are captured in a collection chamber after they fly into the upper reaches of the trap.

“What happened to the barn owls I used to see in Minnesota?” It’s probably due to changes in agriculture that has reduced grassy habitats. Barn owls aren’t made for cold weather. A barn with livestock was just the ticket for a barn owl. Barns can buy happiness. Barns provided shelter, heat and food (rodents). We used to have more pastured land, which provided hunting grounds for barn owls. Both barns and pastures have declined in number.

“Do sapsuckers harm trees?” Yellow-bellied sapsuckers drill sapwells in many species of trees and woody plants, but have a strong preference for birches and maples, trees with high sugar concentrations. Sapsucker sapwells are approximately 1/4 inch in diameter and are typically numerous holes drilled in horizontal rows. The sapwells attract hummingbirds. Sapsucker damage could make a tree vulnerable to other problems, such as insects, disease or decay fungi. The yellow-bellied sapsucker is the only woodpecker in eastern North America that is completely migratory.

“How common are spider bites?” Not common unless you’re a fly. Most suspected spider bites are bites from other creatures such as fleas. Spiders have no reason to bite people. We’re not food for them and many spiders aren’t capable of piercing human flesh.

“When I started counting my blessings, my whole life turned around.” — Willie Nelson

“One should pay attention to even the smallest crawling creature for these, too, may have a valuable lesson to teach us.” — Black Elk