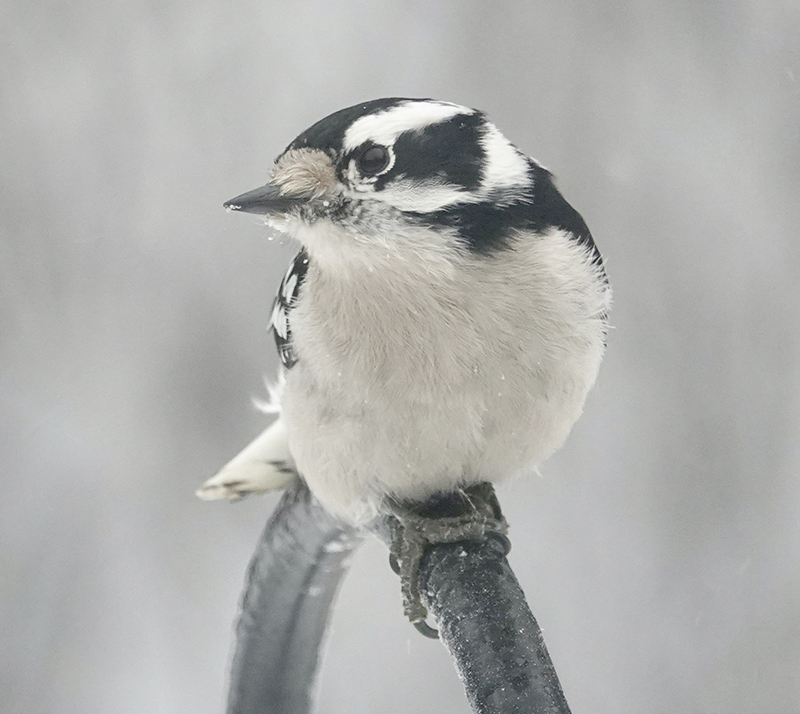 “Everything is nearly copacetic. Yesterday was a bummer. You know you’re getting older when you pull a muscle while eating a sandwich. And a neighbor has a pet skunk. I just got wind of that. But I’ve had a good day today. I found a Twinkie I’d left in a ‘Bonanza’ lunchbox I had in elementary school. It was delicious. I tell everyone I hate snowstorms, but I don’t. They get me out of doing things. I can sit around wearing my ‘I farm, what’s your excuse?’ T-shirt and ancient sweatpants while eating bad things and watching bad TV shows. A storm had been predicted and I’m the blizzard wizard, so I headed to the Grocery Emporium and Gizzard Rental to stock up on pizza, ice cream, root beer and kale. I knew that was what I was going to buy because I can read my mind.”

“My sister Cruella had been bugging me to eat healthier. Anyway, I buy those things and my credit card company called me with a fraud alert because I’d never purchased anything like kale before.”

I tell myself that winter is on my side, but it can be ornery. At least I don’t have to shovel the cold. Here at the Hartland field station in January, I turn to the birds as sunflowers turn to the sun. I endeavor to notice things. It’s an expression of life and of hope.

I watched a handsome red-bellied woodpecker fly to a feeder. It was a male with a red crown and nape. The female has the red nape, but lacks the red crown.

I saw a pair of critically acclaimed birds — cardinals. Each time I take a good look at a bird, I’m reminded why I’m a card-carrying birder.

A squirrel chattered at me the entire time I filled the feeders. Squirrels have a salty vocabulary. I enjoy squirrels even though they can be hard on feeders. It’s as the psalmist said, “Harden not your hearts.” I reckon that applies to all things including squirrels.

We’d just received somewhere between 8 and 143 inches of snow — most of it parked illegally. It reminded me that Harmony became the Minnesota state annual precipitation record holder by receiving 60.21 inches in 2018. This proves that planning and hard work pay off. Harmony crushed the old record of 56.24 inches set by Waseca in 2016. A downy woodpecker flew in as I was filling the feeder. I wondered if a downy finds winter weather a downer? I told it about Harmony’s record in hopes it might bring cheer, but the woodpecker wasn’t interested.

“Where do eagles roost during Minnesota winters?” Bald eagles find shelter in protective areas, in brush, branches and conifers, which reduces exposure to wind. These microclimates hold heat more efficiently than do open spaces. An eagle’s 7,000 to 7,200 feathers are effective insulators and its large size helps it retain heat.

“Do chickens sing?” I think they do. Chickens make a wide range of sounds and communicate with one another. Roosters sing loudly when they crow, and they call hens whenever they find a tasty treat they wish to share. Hens cackle after laying eggs. It’s better singing than I hear from many humans.

“Do vultures have enough carrion space when they fly?” No, and they don’t fly cheep. Vultures asked that I remind human fliers that just because it has a handle, doesn’t make it carry-on luggage. Turkey vultures generally eat mammals, but feed on other carrion such as birds, reptiles, amphibians, fish and invertebrates. I’ve seen them eating rotting pumpkins. A vulture prefers freshly dead animals, but wait for carcasses to reach a condition that George Foreman wouldn’t consider grilling. This makes it possible for the vulture to pierce the skin.

“Faith is taking the first step even when you don’t see the whole staircase.” — Martin Luther King, Jr.

“We have probed the earth, excavated it, burned it, ripped things from it, buried things in it, chopped down its forests, leveled its hills, muddied its waters, and dirtied its air. That does not fit my definition of a good tenant. If we were here on a month-to-month basis, we would have been evicted long ago.” — Rose Bird, former chief justice of the California Supreme Court