‘It’s not just about agriculture; it’s about making people into leaders’ 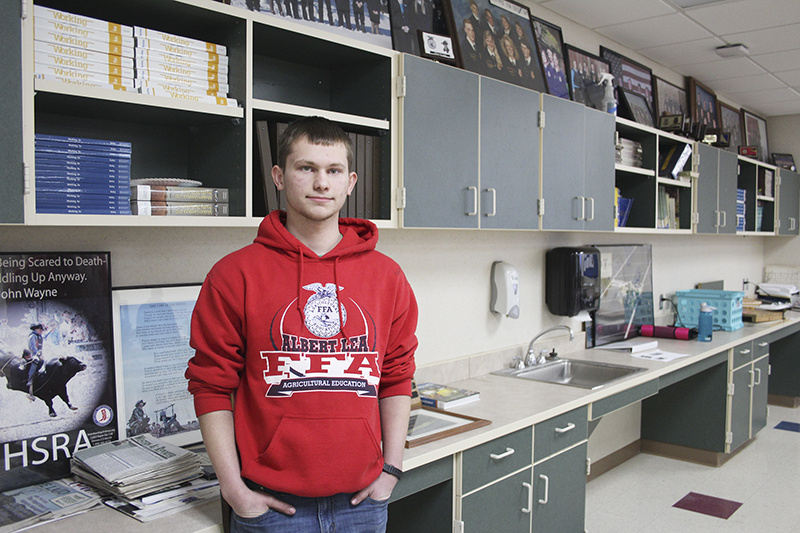 Tanner Darbo, 17, is president of the Albert Lea FFA. He said he joined at the insistence of his cousin, and stayed because he likes being outdoors. - Sarah Kocher/Albert Lea Tribune

Albert Lea FFA president shares how he got started

Tanner Darbo’s cousin made him do it.

That’s how the 12th-grader and now chapter president started in FFA at Albert Lea High School, he said — “and then, I kind of liked it.”

Darbo, 17, had several friends and family members who were involved in the activity, so he joined. He thought that meant he would be spending his time judging animals.

“Once you get in it, you realize there’s a lot more stuff that they actually do,” Darbo said.

He did do general livestock when he started in eighth grade, but the contests he stuck with were forestry and fish and wildlife.

“You can try a bunch of different things and then find stuff you like,” he said.

He stayed with fish and wildlife and forestry because he likes being outdoors, and out in the woods, Darbo said.

Fish and wildlife contests involve two components, Darbo said. One tests his identification skills as he walks around tables of taxidermied fish and rodent specimens, matching them to a list of names. The second portion is a 50-question general knowledge test.

Forestry can be a little more varied. There is still a general knowledge test, but different years may feature different contest components in other areas, like chainsaws or map-reading. The contest will also include wood identification from a slab sample, sample leaves on a twig to identify and determining how much of a tree can be turned into viable lumber, he said.

“I enjoy doing it,” Darbo  said of FFA. He doesn’t participate in other high school activities after the supermileage team was disbanded, so FFA is something to get out and do.

In the morning before school, he said he works at the truck stop at Trail’s  Travel Center. A pair of pliers rests in a leathery hip holster, and his fingernails look like he has been using them to work on something. He uses them for a welding class, he said — and sometimes, they’re just handy to have around.

Darbo said he would like to do FFA in college, if they have it where he attends.

His time in FFA has given him a lot of leadership training, and it helps people become more comfortable speaking in front of others, he said.

“It’s not just about agriculture anymore,” he said. “It’s about making people into leaders, too.”