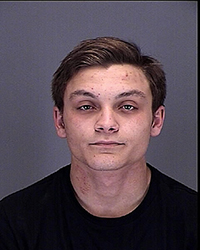 Tanner Allan Spooner, 20, was charged after a Wells police officer was dispatched June 20, 2017, to a Wells address on a report of a disturbance.

The victim reportedly met the officer outside the residence and said Spooner had a gun, an accusation Spooner denied.

Spooner reportedly admitted arriving to collect $70 from the victim but denied having a gun, saying he had a coffee mug in his hand.

Law enforcement did not find either a coffee mug or a pistol.

Sentencing is scheduled for March 25.

Faribault County Attorney Kathryn Karjala-Curtis said Spooner is expected to receive no additional jail time and be placed on probation for five years.

Spooner did not enter a plea to second-degree assault. That charge is expected to be dismissed.