Al Batt: To survive and find food during winter, wild turkeys get creative 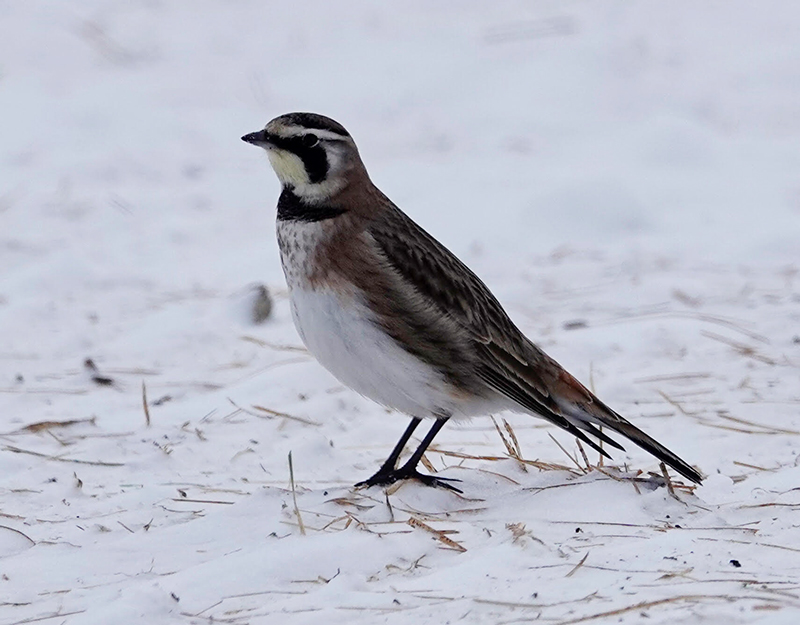 A horned lark has never been known to honk. - Al Batt/Albert Lea Tribune

My neighbor Crandall stops by

“Everything is nearly copacetic. It’s not good to be so thin that you have to walk by twice to make a shadow. I’ve been eating plenty of sweet rolls to give me enough fat rolls to combat the cold. I’m a winter survivor. My sister Cruella notices things like that. She can’t stand to see a man be happy, so she gave me a juicer in the hopes it would make me feel more wanted than the last slice of pizza. I use the juicer to make jelly doughnut-tater tot hotdish smoothies. I love my sister, but she’s not the boss of me. I get all the direction I need from highway signs.”

Great horned owls sang a duet in the darkness surrounding my home. “Who’s awake, me, too,” they called back and forth. It was a breeding pair alternating calls, with the female’s voice recognizably higher in pitch than the male’s, even though he is the smaller of the two. Sometimes their hoots overlapped one another. Perhaps one is correcting the other like longtime married couples do. The owls were establishing boundaries for their breeding territory. They begin nesting in January or February, laying eggs in the abandoned nests of squirrels, hawks, herons or crows, and on cliff ledges or in hollow trees. Eggs hatch in 30 to 37 days. Voles are sandwiches with legs for owls.

A window tells a story. It’s of the supreme spectacle of nature.

Fresh snow acts like a whiteboard. I marveled that mourning cloak butterflies overwinter as adults.

The intense cold and biting wind brought flocks of horned larks to the roadsides. The birds, sandy to rusty brown above and white underneath, glean seeds from exposed ground.

A pileated woodpecker pair stays together on territory all year. I’ve read a number of studies saying that a territory can be 125 to 1,200 acres depending upon its type and quality.

A black-capped chickadee, the state bird of Maine and Massachusetts, hung upside down from a feeder. The tiny bird is strong and agile enough to do so with ease. Birds are stunningly astonishing and astonishingly stunning.

A number of people have reported seeing flying squirrels feeding on sunflower seeds and suet. One correspondent put out peanut butter for them.

Red oak trees drop leaves. Squirrels gathered the withered leaves for use as bedding and insulation. A hole in the snow turned out to be a red squirrel cave that it used as a subway system for safer traveling.

This is the time of the year when the interiors of cars parked in sunlight begin to warm. That’s a fine thing.

“I just got out of jail and am about to marry a fine young woman. Both her parents are pastors, and they’d like to know more about my family. My father is in prison for running a burglary ring. I have one brother who is a birder, another brother who has been charged with running a Ponzi scheme and a third brother who steals cars for a living. My question is: Should I tell my future in-laws about my brother the birder?” Break it to them gently.

“What do wild turkeys feed on during a Minnesota winter?” The big birds are able to excavate snow. When acorns become scarce, turkeys survive on scattered corn remaining in fields, mosses, buds, seeds and fern spores. The ground below bird feeders and livestock manure spread of fields are popular winter-feeding sites.

“When can I first expect to see groundhogs in Minnesota each year?” March brings the first groundhogs out of their slumbers. Skunks aren’t true hibernators, so a skunk is more likely than a groundhog to see its shadow on Groundhog Day.

“How many liters of skunks does a female have each year?” There is just one litter of striped skunks per year. Breeding for skunks takes place in late February or March. Gestation takes 59 to 77 days and 4 to 7 young (kits) are born in late April to early June. The kits are weaned in 42 to 56 days.

“What is a water horse?” It’s a hippopotamus and is a nod to the name the ancient Greeks gave them that means “river horse,” a combination of hippos (horse) and potamos (river). I suggested that name for our Little League team, but the Hartland Hippos never became a reality.

“A man always has two reasons for doing anything: a good reason and the real reason.” — J. P. Morgan

“The splendor of the rose and the whiteness of the lily do not rob the little violet of its scent nor the daisy of its simple charm. If every tiny flower wanted to be a rose, spring would lose its loveliness.” — St. Therese of Lisieux