Al Batt: Dodo association with idiocy may be misnomer for unafraid bird 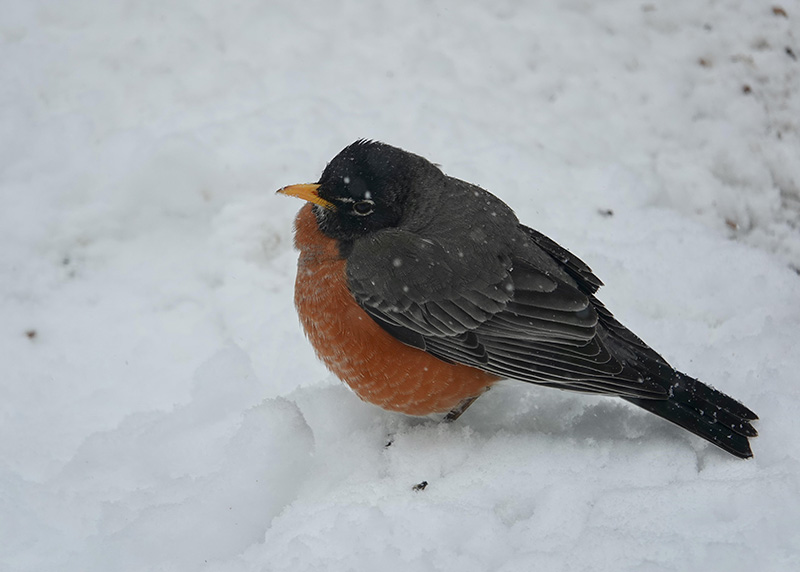 The American robin has an appetite for sunflower hearts and chips. Al Batt/Albert Lea Tribune

“Everything is nearly copacetic. I was finally able to make it to the gym to cancel my membership. I know February was our shortest month, but we must have gotten two of them this year. February is supposed to be a dry month, not one in which kids get snow days. Uffda! Then a judge grants a restraining order against winter. That just ticked off Old Man Winter. This isn’t winter, it’s a glacier. I have to peek around giant piles of snow before cautiously entering an intersection. I did the Polar Bear Plunge with real polar bears. I’ll celebrate St. Patrick’s Day with green snow. There is snow time like the present. I got my snowplow, snowblower, snowmobile and snow shovel all stuck in the snow on the same day. Bad weather unites us. We have shared experiences. We fight the same battles. And I read more. That’s a good thing. I was a smart kid, but I grew out of it. I checked out the book, ‘Cowboy Cowards of the Old West’ and all the pages fell out. I took it back to the library and the friendly librarian told me it was because it had no spine.”

They could have just said, “Look out!” but the newspaper headlines blared that locals were bracing for another winter storm. Bracing meaning, I should have been preparing physically and/or mentally for something unpleasant. If I’m not ready by now, I’ll never be ready. There was more than enough snow to go around. Winter isn’t an easy companion. The citizens of the yard stay busy because they need to eat. Goldfinches generally become more common customers at the bird feeders during the second half of winter, as if inspired by a coach’s halftime talk. Juncos were trilling as if it were the next season. Horned larks, Lapland longspurs and snow buntings fed on roadsides. The darling of the yard and my minimum daily bird requirement, a chickadee, sang of spring.

I stumbled outside into a day that was exactly my size.

“My brother used to call me a dodo when he thought I’d done something stupid. Why was that extinct bird considered stupid?” The dodo was discovered by Portuguese sailors in the 1500s on Mauritius, a small island in the Indian Ocean where the flightless bird had no natural predators and no fear of humans. The sailors incorrectly thought the lack of fear was a lack of intelligence, so they named the bird the dodo from the Portuguese doudou, which means simpleton. The dodo population dwindled as they were hunted for sport and food. Their eggs were eaten by the settlers’ pigs. In approximately 80 years, the dodo was extinct.

“Why do owls cough up pellets?” Owls swallow small prey whole. The gizzard is a thick-walled organ that uses digestive fluids and grit to grind and dissolve all of the usable tissue from the prey. The types of tissue that can be dissolved by an owl’s digestive system include muscle, fat, skin and internal organs. Bones, teeth, feathers, fur and insect shells collect in the gizzard. The bird regurgitates the indigestible material as a pellet.

“Where do birds go when there are strong winds?” Wherever the wind takes them. Different birds use different methods to wait out a storm. They seek shelter. Birds that normally roost in cavities — such as chickadees, small owls and woodpeckers — hide out in natural cavities or roost boxes. Many birds seek shelter on the lee sides of trees, along tree trunks or inside thick hedges or tangles. Some find their way into buildings. They hunker down. Birds are made to survive what nature throws at them.

“I who am blind can give one hint to those who see — one admonition to those who would make full use of the gift of sight: Use your eyes as if tomorrow you would be stricken blind. And the same method can be applied to other senses. Hear the music of voices, the song of a bird, the mighty strains of an orchestra, as if you would be stricken deaf tomorrow. Touch each object you want to touch as if tomorrow your tactile sense would fail. Smell the perfume of flowers, taste with relish each morsel, as if tomorrow you could never smell and taste again. Make the most of every sense; glory in all the facets of pleasure and beauty which the world reveals to you through the several means of contact which nature provides.” — Helen Keller

“Each species is a masterpiece, a creation assembled with extreme care and genius.” — E. O. Wilson