Al Batt: Farmers’ Almanac says the area’s spring will be chilly and rainy 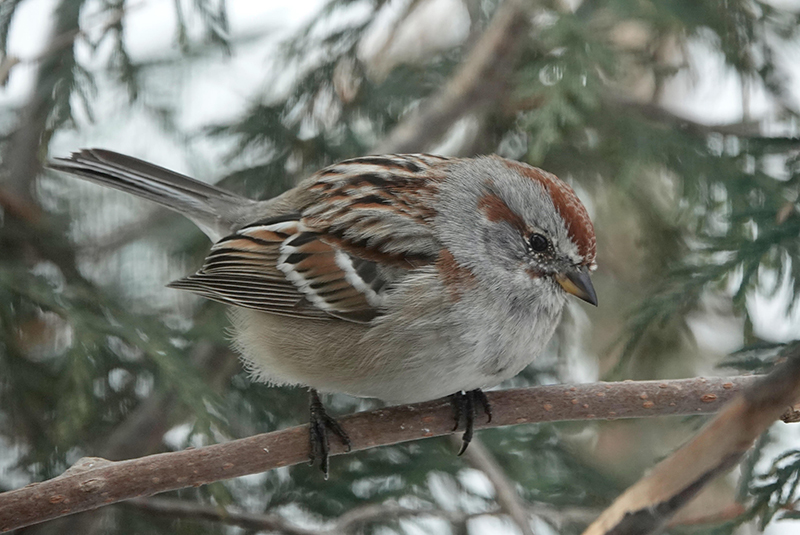 The two-toned bill of the American tree sparrow sings of their plans to fly northward. Al Batt/Albert Lea Tribune

“Everything is nearly copacetic. There’s some old guy living in my mirror and I need a suit of armor for the big toe of my right foot that I’m always stubbing, but Peeps are in season, so life is good. One of my cousins retired. I didn’t even know he’d ever had a job. Every family has one of those guys. I need to go shopping. I’m so hungry it’s clouding my mind or it might be flashbacks from all those Pop Rocks I’ve eaten. I need breakfast cereal and milk. This morning, I had Cap’n Crunch dust in orange juice. Everyone else set their clocks ahead an hour. Not me. I need more sleep. I set mine back an hour. I just have to remember to be two hours early for everything. It’s a grand life if you can outsmart it.”

The Farmers’ Almanac says our spring will be chilly and showery. It’s nice to see temperatures without a minus sign in front of them.

The smell of spring was in the air, compliments of a skunk.

Spring was in the air in the flight of migrating birds. On my walk, I encountered robins that had migrated back to Minnesota. I could tell because they were skittish and vociferous. The robins that wintered here are hushed and reserved in comparison. The wintering robins are too beaten up to be thrilled about anything. The killdeer were stirred, calling out their name excitedly. There were grackles galore. I once played the part of the mayor of a make-believe city named Grackle Junction, leaving me with a soft spot for the birds. Greg Bartsch of Geneva told me of the many eagles on Geneva Lake. Only food could cause that many bald eagles to congregate like that. They enjoy a fish buffet.

I saw tiny, black flecks sprinkled in the melting snow around the base of a tree. They were springtails called snow fleas.

Wild turkeys gobbled. A red-tailed hawk carried nesting material. This raptor’s nest is a tall pile of sticks. As I watched the hawk, I thought of Aeschylus, an Ancient Greek playwright, who has been described as the father of tragedy. He died in Sicily, in the city of Gela, in 456 or 455 BC without having given a thought to Tesla or Twitter. Valerius Maximus wrote that Aeschylus was killed by a tortoise dropped by an eagle or a lammergeier or bearded vulture (which do feed on tortoises after dropping them on hard objects). It was written that the bird had mistaken the bald head of Aeschylus for a rock suitable for shattering the tortoise’s shell. Pliny, a Roman scholar and naturalist, wrote that Aeschylus had received a prophecy that he’d be killed by a falling object, so things worked out. This story may be mythical.

“What bird builds the biggest nest in Minnesota?” The bald eagle constructs the largest nest of any North American bird. It gathers sticks, grass and cornstalks, often reusing nests and adding to it each year. A nest can weigh a ton and be over 9 feet across. The “Guinness Book of World Records” lists a Florida bald eagle nest as being the largest at 9.5 feet across, 20 feet deep and weighing 4,409 pounds.

“What is the mast of a tree?” Mast typically refers to the nut crop of a tree, but it also includes seeds and fruit of trees and shrubs. Hard mast is nuts and seeds. Soft mast is fruits and berries. The definition of mast can be expanded to buds and catkins. Mast is an important provider of food for wildlife.

“There are two kinds of people, those who do the work and those who take the credit. Try to be in the first group; there is less competition there.” — Indira Gandhi