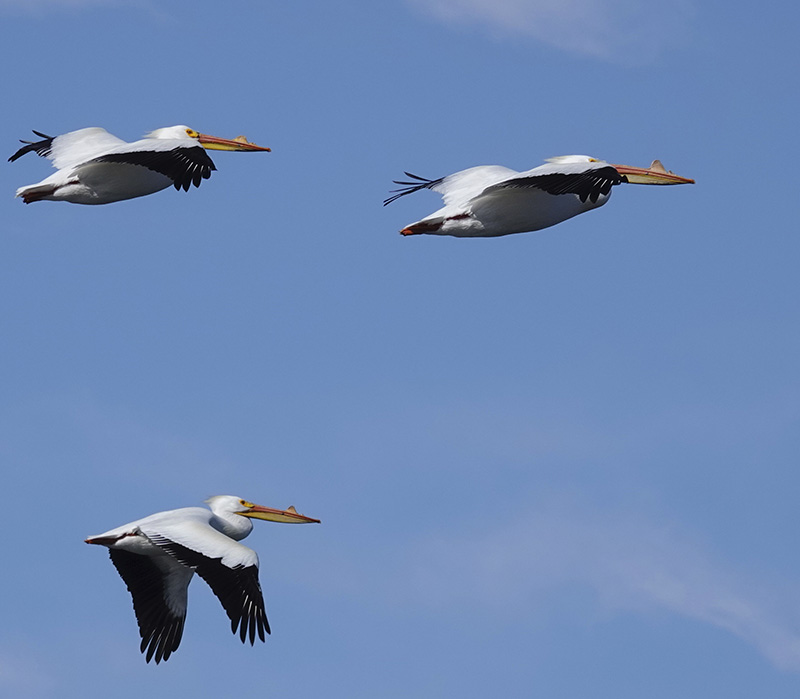 An American white pelican mature enough to reproduce develops a nuptial tubercle, a fibrous plate on the upper mandible. The tubercle falls off when mating season is over. Al Batt/Albert Lea Tribune

“Everything is nearly copacetic. My birthday has passed. I feel

like a teenager with too many miles on him. I’ve found it helps if I lower my standards each day. I need to take off some winter weight. It takes me two trips to the bathroom scale to weigh myself. I tried a gym membership, but one day I put my sweatpants on backwards and walked away from that. I’m on a new diet. I eat whatever I want and hope for the best. I have a physical fitness regime that I adhere to. I walk from wherever I’ve parked my car.”

“Is the spring coming?” he said.

“It is the sun shining on the rain and the rain falling on the sunshine.”

I love those words written by Frances Hodgson Burnett.

I filled a bird feeder and invited my executive platinum plus members to feed. A cardinal bit off the end of its song. Was it due to a predator, a competitor or had it forgotten the tune? I didn’t know, but I was oddly concerned. I watched chickadees go about. I could mail up to three of them in an envelope for one Forever stamp, but they wouldn’t like it.

LBJs filled the yard. Little brown jobs. LBBs — little brown birds. Brown colors of excitement. The day before Easter was warm with a south wind. That encouraged travel for many of the migrant birds hanging around the yard before they headed north. Many juncos and other native sparrows cleared out.

Robins are happy to see the worms. Earthworms have no eyes with which to see the robins. They do have receptors that sense light or dark.

I watched a Forster’s tern as it made a U-turn, one that I believe was illegal, and disappeared from my sight. American white pelicans flew so high in a flock they were swallowed by the sky.

“Is there a red owl that the store was named after?” Red Owl was a regional grocery store that began in 1922 when it was a coal investment firm for General Mills and headquartered in Hopkins, Minnesota. It once was the premier grocery business in Minnesota. The title sequence of the “Mary Tyler Moore” television show had Mary in a Red Owl meat department. Despite internet claims, there isn’t an owl the color of a cardinal. The Madagascar red owl looks like a barn owl and has an orange-rufous plumage. There is a red morph of our eastern screech owl that is rufous in color.

Cathy Probst of Weslaco, Texas, wondered if it’s normal for a mockingbird to sing at night. Although all adult male northern mockingbirds sing during the day, studies have found it’s typically a bachelor singing at night. The night music is a love song with the sounds of other birds embedded in its melodies. I was staying in a cheap motel in the far south when a mockingbird sang all night just outside my door. A gifted mimic, the bird sounded like everything and anything. He sang on top and around his own singing. I wanted to find where he was napping during the day, sing a couple of Slim Harpo tunes at him and see how he liked it.

“I see what I think are centipedes and millipedes in my basement. Do they really have as many legs as their names would suggest?” These critters do provide a creep factor, saving people the time and money of having to watch creepy horror movies. When you enter the basement, it’s a millipede if it curls up and becomes motionless. A centipede runs away. The centipede you’ve seen probably has about 30 legs and the millipede perhaps 160.

“What is the most numerous bird in the world?” The most common bird in the world is the domestic chicken, most of which originated from the red jungle fowl. The most abundant wild bird is likely the red-billed quelea, sparrow-sized birds found in sub-Saharan Africa, with a breeding population of 1.5 billion.

Please join me for a nice meal and my talk on birding from 11 a.m. to 1:30 p.m. May 13 at Good Earth Village in Spring Valley. “This and that. Birds and a Batt. Bird stories told by a birdbrain, naturally. Each bird has a story — what’s yours?” Free will offerings accepted. For information or to RSVP, go to www.GoodEarthVillage.org/LunchandLearn.

“Everything has beauty, but not everyone sees it.” — Confucius

“I encourage people to be nice to their pets. They’ve seen you naked and not laughed. OK, maybe they do laugh, but they have the decency to wait until you leave the room.” — Oliver Christiansen