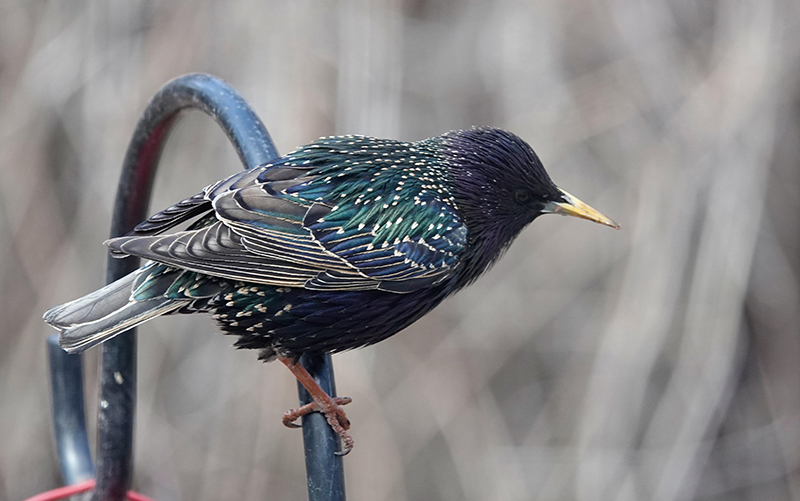 “Everything is nearly copacetic. I’m working my library card overtime. I’m reading a book on the history of gravy.”

I watched the snow line retreating in the fields. I kept an eye out for a mourning cloak, a dark brown butterfly that overwinters here an adult and is usually the first butterfly I see each year.

The time of my life has been measured in grackles — when they come and when they go. Mourning doves are doing hula-hoop calls. Red-winged blackbirds sang, “Look at me,” from perches. The first baby birds arrived — great horned owlets. I spotted sandhill cranes, song sparrows and an American woodcock (bogsucker, timberdoodle). The cocker spaniel was named for its specialty of flushing woodcock.

I saw evidence of where rabbits had fed above the snow line. Rabbits don’t dig much.

I’m saddened by the death of Bill Thompson III. This wonderful editor/publisher of “Bird Watcher’s Digest” was a friend I dearly miss. The birds had no better friend or a more influential voice on their behalf. He’d hoped to be able to see the warbler migration in May. I’ve always said that there is no crying in birding, but there is. As a gifted musician, Bill would want everyone to take a sad song and make it better.

I saw dog statues near a school. I was told they were there to keep the Canada geese away. I asked as to their effectiveness and was shown a photo of one statue surrounded by the big birds. Geese are smart.

I’m sure you’ve been thinking, “I wish I had a cat that could predict the weather.” Folklore says cats are capable of weather prognosticating. When a cat sneezes, it’s a sign of rain. Bad weather can be expected when a cat licks its fur against the grain. A snoring cat foretells foul weather. I’ll add a caveat: A dog of my acquaintance tells me that all cats are liars.

“What are the chances a monarch butterfly egg will become a butterfly?” Studies show that 97 percent fail to become butterflies. A single female monarch could lay up to 500 eggs, one egg at a time.

“I raise ducks. I found one of them headless. What did that?” There are a number of predators that could be the culprit, but typically it’s the work of a great horned owl.

“Where do woolly bear caterpillars spend the winter?” The woolly bear caterpillar goes into quiescence, hiding under leaf litter and remaining dormant until temperatures rise. They could wake in nice weather. They’re equipped to survive by producing glycerol, which keeps their cells from rupturing when they freeze. In spring, woolly worms become active, form cocoons and metamorphose into the Isabella tiger moths.

“Any predictions as to mosquito populations?” A wet spring could lead to serious mosquito pressure. Maybe. If you want more skeeters, put out some automobile tires for raising them. It’s difficult to drain all the water from a tire.

“I’d like to start watching birds. When is the best time to start?” Today would be the perfect day.

“Where could I see a northern saw-whet owl in Minnesota?” Most anywhere, depending upon the season. This owl, the size of a soft drink can, might take a lot of looking and good luck to see. It’s most common in the northeast part of the state during its breeding season. Northern saw-whet owls have distinctive too-too-too song, an insistent series of whistled notes on roughly the same pitch, which sound like a vehicle’s back-up warning signal. The tiny owl’s name comes because the “skiew” alarm call it makes has a resemblance to the whetting of a saw.

“For most of us, knowledge of our world comes largely through sight, yet we look about with such unseeing eyes that we are partially blind. One way to open your eyes to unnoticed beauty is to ask yourself, “What if I had never seen this before? What if I knew I would never see it again?” — Rachel Carson

“The most beautiful thing we can experience is the mysterious. It is the source of all true art and all science. He who can no longer pause to wonder and stand rapt in awe is as good as dead. His eyes are closed.” — Albert Einstein