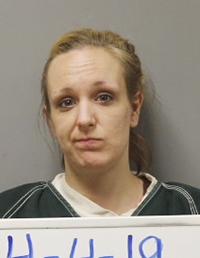 According to court records, police were alerted to Kontz after she reportedly attempted to pass the counterfeit money at Bomgaars in Albert Lea. The report states she went to the register at the store to pay, and the bills she attempted to pay with tested as counterfeit with a counterfeit marker. The employee also noticed the bills had the same serial number.

After the employee told Kontz the bills tested as counterfeit, she then left the store.

Court documents state footage at the store matched the description of someone who passed counterfeit money at the Salvation Army earlier in the day.

Surveillance video in the Bomgaars parking lot of the store also showed Kontz riding as the passenger in a white Nissan Altima.

When officers found the car, they conducted a search and reportedly found counterfeit money and baggies of white crystals and powder, which later tested positive for methamphetamine, behind the center panel of the car.

The found bills consisted of one $5 bill, six $20 bills and one $50 bill. The weight of methamphetamine totaled 10.4 grams.

The driver of the car told police he did not know about the bills or the drugs in the panel.

Kontz is next expected to appear in court April 18.

A mugshot for Kontz was unavailable as of press time.