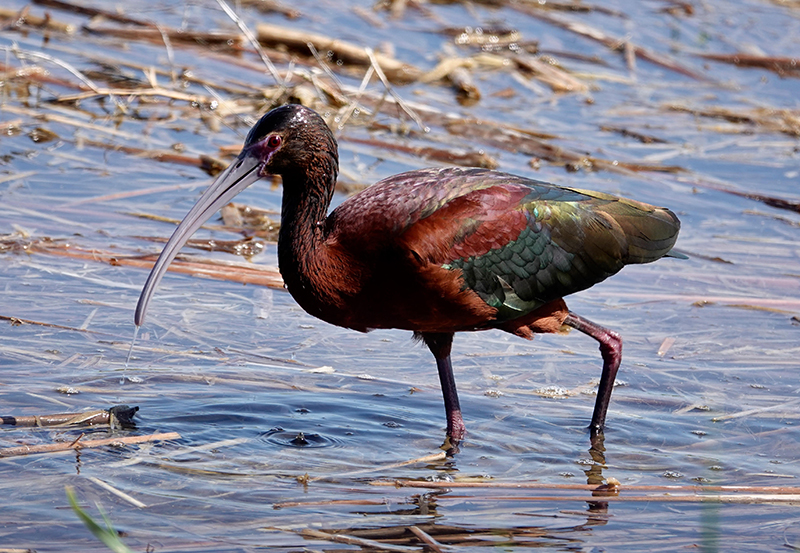 This white-faced ibis, sporting the colors of a flock of bantam roosters, can be mistaken for a glossy ibis. - Al Batt/Albert Lea Tribune

“Everything is nearly copacetic. I’m looking at old cars that

would be new to me. I do car rescues. I adopt cars. One is an itty-bitty job. I’ll have to lose weight just to get in it. I’ve gone on a diet of pizza and jelly doughnuts.”

“You think that will help you lose weight?” I say.

I walked to the mailbox one morning. At the edge of the yard, there were two gray partridges. I startled them into flight. One flew north and one flew south, not likely to be seen by me for another year. I’m glad they survived our April ice and snow. I see them rarely here in the backcountry.

I watched a male cardinal feeding his mate. I’m surprised to see a cardinal anywhere other than in its preferred habitat, a Christmas card. Male goldfinches made it a lemon drop day.

My eyes were drawn to a dead tree where a great blue heron, a turkey vulture and two starlings were perched. I’m easily amused, but that thrilled me.

I let my ears take me hostage. A house wren sang a song that a bird the size of an eagle should have been singing. It provided a yard full of song. A chipping sparrow chooses to trill more like an insect than like Elvis Presley.

A visit to a local lake showed a double-crested cormorant as a blue-eyed low rider when settling in the water like a loon. Spring hurries along. It wasn’t long ago when I watched a love hexagon of five northern shoveler drakes chasing one hen. They flew as a group. It was a cross between a courtship flight and police pursuit. Now Canada goose goslings are learning to mow the lawn.

It was my pleasure to speak at the Wings & Wetlands Festival in Great Bend, Kansas. The festival featured Cheyenne Bottoms and Quivira National Wildlife Refuge — two of America’s best birding spots for both birds and birders. The great wisdom of the world was evident as there were always more birds than birders. Cheyenne Bottoms is the largest inland marsh (41,000) acres in the US. I visited the wonderful Kansas Wetlands Education Center. It gave me a delightful walking and learning experiences.

My first field trip stop presented a motionless American bittern pretending to be marsh vegetation in a sneeze of a misty and foggy morning. In my boyhood years, this bird was called a slough pump because of its loud “oong-KA-chunk” or “pump-er-lunk” call. Others called it a belcher squelcher, thunder pumper or stake driver. When spotted, the bittern sometimes freezes in place with its bill pointed skyward. It sways side to side, hoping to be mistaken for reeds.

I pointed out a sedge wren for some avid birders from New Mexico. I listened as I told them that I was pro-sedge wren. Odd. “Way to take a stand,” I thought.

I pointed out a skink and a Kansan told me that when I see a lizard, it’s a sign of rain. I smiled in disbelief, but it rained anyway.

In his song, “It Can’t Happen Here,” Frank Zappa warbled, “Who could imagine that they would freak out somewhere in Kansas.”

I’m going to use the definition of freak out indicating heightened excitement and conclude that Zappa was watching birds at Cheyenne Bottoms or Quivira when he wrote that.

There are two kinds of people. Being someone at the Wings & Wetlands Festival might be better than either one.

Millie Westland of Hayward asked if orioles eat marshmallows. They do. I’ve seen people in the Lower Rio Grande Valley in Texas feeding marshmallows to orioles and other birds. If an oriole in your yard is wearing a cowboy hat, it’ll likely be used to chowing down on marshmallows. Are they good for birds? I don’t know. A dedicated s’mores eater I know claims marshmallows are a health food.

“How long are a pelican’s wings?” An American white pelican has a nine-foot wingspan.

“How long does a deer live?” The oldest wild white-tailed deer lived 20 years.

“What percent of blue jays migrate?” Less than 20 percent.

“We don’t need more to be thankful for, we just need to be more thankful.” — Carlos Castaneda

“A strong nation, like a strong person, can afford to be gentle, firm, thoughtful, and restrained. It can afford to extend a helping hand to others. It is a weak nation, like a weak person, that must behave with bluster and boasting and rashness and other signs of insecurity.” — Jimmy Carter