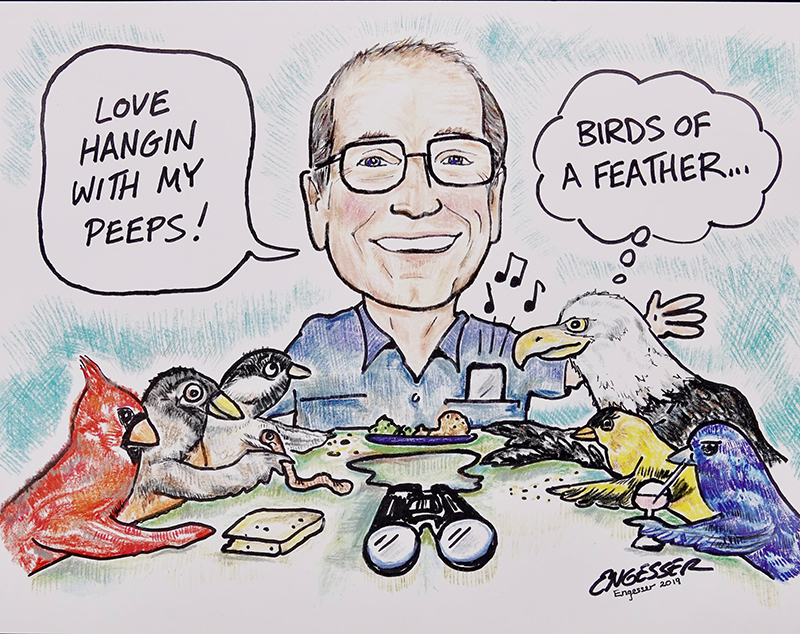 This drawing of the Ol’ Birdbrain, also known as Al Batt, was done by Joe Engesser of Red Wing. - Provided

“Everything is nearly copacetic. I’m still living a kale-free existence, but I came down with a nasty cold, as opposed to the good kind of cold. Everyone tells me it’s a terrible time to catch a cold. There is no time to catch a cold that isn’t terrible. For the better part of a week, I slept 16 hours a day! That wasn’t a bad thing. I may not have gotten much work done, but it sure cut down on the number of mistakes I normally make.”

A turkey stopped in the middle of the road, appearing to motion that my car should go around. I went around. I’d just heard from a friend who told me that a collision with a raccoon had resulted in $5,600 damage to a car.

The grass whipped in the wind as if it were trying to free itself from its roots. A leggy fawn fought the furious wind. The wind subsided and I listened to a trio of marathon singers — brown thrasher, gray catbird and red-eyed vireo. They may be repetitive, but I never grow weary of hearing them. They are no whip-poor-wills, nocturnal birds with loud, distinctive voices, that can be heard singing long in the night in parts of Minnesota. It’s not uncommon for a “whip” to chant its name 100 times without break.

I watched a groundhog kit and a cottontail rabbit eating dandelions on the lawn. The rabbit was larger than the young woodchuck. Suddenly, the baby groundhog raised up on his rear legs like a miniature grizzly and looked menacingly at the bunny. The rabbit ignored it. The groundhog charged the rabbit. The last I saw of the two is when they were headed around a pass between shrubs and trees.

A rose-breasted grosbeak, American goldfinch and white-breasted nuthatch sunned themselves on a feeder attached to a window. A man told me that in his retirement, he spends more time with his small dog. He and the dog spend 15 minutes each morning staring out the window. The dog points things out with its eyes. They particularly enjoy watching the crows. Crows are always up to something.

American white pelicans flew overhead. Their 9-foot wingspans carry them unusually long distances to forage for food. Fishing trips of 30 miles one-way aren’t uncommon. A man from Clearwater, told me that he’d vacationed in San Diego. He didn’t think he could have ever tired of the nice weather there. He was enjoying an adult beverage at a table outside a cafe, when a brown pelican flew over and made a deposit directly into the man’s glass. Direct deposits aren’t always pleasant things.

June brings summer and is our wettest month of the year. Summer coaxes flowers from the woods to bloom in the open. June is typically when I first see flashing fireflies. Some years, I see them in May, but from the middle of June through July is when I see them most often.

Adult dragonflies on wing become numerous after emerging from their larval stages in the water. I noticed small masses of sticky, frothy bubbles at leaf nodes of plants. The white foam blobs are produced by the nymphs of spittlebugs, which are small insects getting their name from the globs of foamy spit they create along the stems of plants. The foam serves a number of purposes: Protecting the nymph from predators as well as providing the tender nymph with insulation from temperature extremes and low humidity.

“Why are there so few birds at my feeders?” If the food isn’t fresh, they stay way. A cat or accipiter (hawk) can keep birds away for short stretches. Typically, what happens this time of year is once the eggs have hatched, the parents of many species move to a high protein diet of insects and other small invertebrates to feed the nestlings. This change in diet eliminates many feeder visits.

“I stopped by a stream in southeastern Minnesota and heard an odd sound that reminded me of a bad banjo player. What could it have been?” It was a green frog. It’s the second largest frog in Minnesota. Only the bullfrog, the largest frog in North America, is larger. The green frog makes a sound like someone plucking a single banjo string.

“Life is a long lesson in humility.” — James M. Barrie