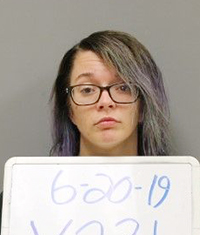 Cassidy Marie Leduc-Miller, 25, reportedly sold 27.4 grams of meth on June 6, 2018, during a controlled buy with the drug investigative unit.

The sale reportedly took place in an apartment at 423 Court St. The informant reportedly bought 1 ounce of meth for $800.

She reportedly told an agent with the drug unit she had sold in the past to support her habit. She did not remember the specific sale but said it would not have been out of the ordinary for her, reports state.

Leduc-Miller is next scheduled to appear in court July 11.