Book about national emblem to benefit eagle center in Wabasha 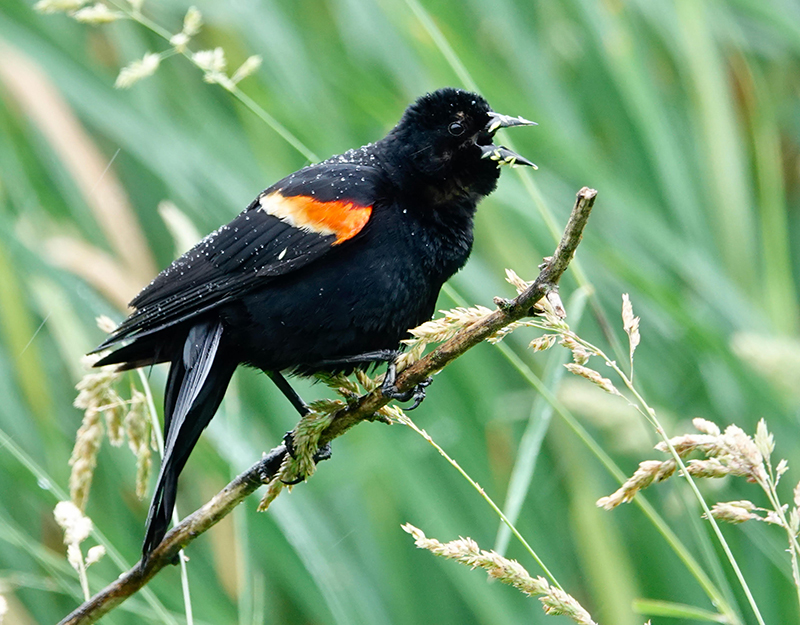 A red-winged blackbird is a feisty fellow, more than willing to attack a larger bird. This one was taking a lunch break from being feisty. Al Batt/Albert Lea Tribune

“Everything is nearly copacetic. The local college

just announced the results of a scientific study it had performed. Their research found that out of 2,293,618,367 people, 94% are too lazy to actually read that number.”

I walked while having a heated argument with the temperature and inciting conflict with biting insects. An unseen skunk held me smellbound.

I watched soaring turkey vultures. A vulture’s heart rate when soaring is about the same as it is when the bird is sleeping. A half-dozen blackbirds hammered upon a Cooper’s hawk. There was no movie on that flight.

Earwigs star in folklore claiming they will crawl into your ear and lay eggs. They don’t. Earwigs eat pests like aphids, mites and nematodes. They will chew on ornamental and vegetable plants, particularly dahlias, zinnias, hollyhocks, lettuce, strawberries, potatoes, roses, beans, beets and the silk of sweet corn. They are preyed upon by tachinid flies, centipedes, toads and some birds.

‘American Eagle: A Visual History of Our National Emblem’

Preston Cook of Wabasha donated over 25,000 items, depicting eagles in culture, politics and history, from his collection to the National Eagle Center in Wabasha. How does one get started in collecting things portraying eagles, which have been used to advertise everything from mattresses, underwear, cornflakes and embalming fluid? Preston saw a movie, “A Thousand Clowns,” in which Murray Burns, played by Jason Robards, said, “You can never have too many eagles.”

Preston took that as a challenge. All proceeds from the sales of Preston’s book, “American Eagle: A Visual History of Our National Emblem,” will be donated to the National Eagle Center.

“Do lightning bugs continue to flash when a thunderstorm is producing lightning?” They do, fireflies don’t fear flashy competition.

Maren Ring of Albert Lea asked if catbirds mate for life. They are essentially monogamous during the breeding season, but pair bonds don’t necessarily persist from one year to the next.

“What would puncture eggs in a nest?” There are many suspects: house wren, brown-headed cowbird, house sparrow, red-headed woodpecker, gray catbird and others. There are many animals that eat bird eggs: crows, jays, magpies, grackles, squirrels, humans, snakes, raccoons, weasels, deer, skunks, cats and those dreaded others once again.

Norm Fredin of Albert Lea asked about the nesting habits of house wrens. When it comes time to nest, wrens search out cavities. If you hang several nest boxes, a male will prepare a number of potential nests for a female’s consideration, stuffing available cavities with twigs. She chooses one and finishes the nest herself, a cup-shaped depression built atop the twigs, lined with softer material including fine grasses, hair, moss or bits of string and debris. The female lays 3-10 eggs and she alone incubates them. The young hatch in 9-16 days and fledge in 15-17 days. They often have two broods.

Gordy Toenges of Alden asked why we have more vultures than in the past. Edward Abbey wrote of the turkey vulture, “Let us praise the noble turkey vulture: no one envies him; he harms nobody; and he contemplates our little world from a most serene and noble height.” Abbey also penned, “If my decomposing carcass nourishes the roots of a juniper tree or the wings of a vulture — that is immortality enough for me. And as much as anyone deserves.” A friend, Bob Janssen, has visited 1,836 cities, towns and villages in Minnesota while birding and has counted at least 225 bird species in all of Minnesota’s 87 counties. His favorite bird is the turkey vulture. Mary Oliver wrote, “Like large dark lazy butterflies they sweep over the glades looking for death, to eat it, to make it vanish, to make of it the miracle: resurrection.”

Several accounts from the late 1800s indicated vultures were locally abundant throughout many parts of Minnesota. T.S. Roberts, a physician known for his ornithological work, wrote this about the turkey vulture in 1932, “was formerly more common in Minnesota” and “still to be seen in fair numbers throughout the state.” Increases in human settlement, expanded agriculture, human disturbance and human persecution all likely contributed to this decline. Turkey vultures are seen in every county in Minnesota. The growth in its range and population is attributed to expanded road miles, increased deer populations, openings created by logging activity and warming temperatures. These changes facilitated movement, provided a steady supply of carrion for food and increased survival of vultures.

“How many pines are there in Minnesota?” The native pines are eastern white pine, jack pine, red pine (Norway pine) and porcupine.

“Vision is the art of seeing what is invisible to others.” — Jonathan Swift

“There are no persons capable of stooping so low as those who desire to rise in the world.” — Lady Marguerite Blessington