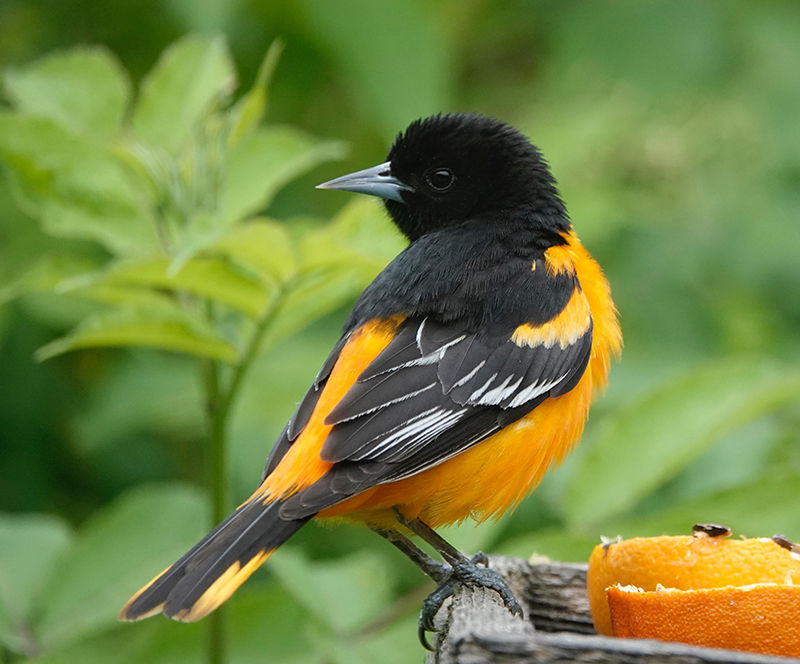 The Baltimore oriole shares the heraldic colors of the coat of arms of Lord Baltimore. Al Batt/Albert Lea Tribune

“Everything is nearly copacetic. I’ve been helping Pop in his shop. Pop puts a tiny wood stove in each of the wren houses he builds so the birds won’t have to fly south. He hasn’t moved to the digital world. He thinks Wikipedia has two wheels, but he loves books. Pop starts reading a book in the middle so he not only wonders how the book ends, he wonders how it began. I had to take a nap after an exhausting game of dominoes with him. I’m still tired from breathing all day, but I’ve started untangling the lights so they’ll be ready for Christmas.”

I couldn’t sleep long enough to allow the fog to lift. I’d like to have missed the mist. I did a Breeding Bird Survey. The car filled with mosquitoes, but I didn’t count them. I counted birds. Toads trilled, cows mooed, green frogs plunked and chorus frogs sounded like a thumbnail being run down the teeth of a comb. I stopped at the same spots in Freeborn, Mower and Steele counties that I’ve been stopping at for years and counted all the birds I’m able to see or hear in three minutes. I listened to sedge wrens both sedging and wrenning. Many birds carrying hyphens still found the strength to sing. There were many crowing roosters — both pheasants and domestic chickens. I saw a few sandhill cranes and more red-headed woodpeckers than that. I saw the perfect murder — of crows. I counted 53 species compared to 56 last year. I spotted more red-winged blackbirds than any other bird, followed by common grackles and European starlings. Red-wings were seen at the most stops followed by American robins and grackles. Red-winged males began singing in March and are still singing in July. A pickup pulled up to my motionless vehicle at 5:45 a.m. and asked if everything was OK. It was darn near perfect.

Back at home, I watched a catbird eat raspberries. Inspired, I picked black caps and found them delicious. The catbird scolded me. A tree swallow’s eyes peeked out at me from her nest box. There was little doubt that I was happier to see her than she was to see me. She’s a good neighbor who hasn’t swallowed a single tree in my yard. A house wren chattered severely at me. The intensity increased as I neared its nest. The tiny bird sounded like a Geiger counter.

There is an eastern cottontail rabbit, a lawn bunny, that follows me around the yard. I don’t feed it and we’ve never been properly introduced. Perhaps our paths cross coincidentally. As I watched the bunny eat a dandelion with great gusto, I was reminded that what is a weed to someone is feed to another. It’s been an odd summer. I hear no song sparrows singing in the yard. I don’t recall that ever being the case before.

Gene Amley of New Richland asked why he isn’t seeing any orioles. When Baltimore orioles arrive in the spring, they’re hungry after a long migration and take advantage of food offerings at feeders. When they’re nesting and feeding young, their diet shifts more to protein-rich insects. The adults often bring their fledglings to the feeders.

“How does a mosquito find me so quickly?” A mosquito can detect sweat and carbon dioxide. And they can find you on the internet.

“Why does a deer’s coat change color?” A deer’s coat provides thermoregulation and camouflage. Summer coats are reddish and thin, allowing deer to cope with heat stress. Hormonal changes turn that coat into a two-layered, faded gray or brown. The outer guard hairs on a winter coat are hollow and stiff. The inner layer is soft and dense, equipping the animal with insulation. Coat color tends to be darker in forested areas and lighter in agricultural lands.

“What kind of woodpecker is Woody the Woodpecker?” An animated one. Walter Lantz, Woody’s creator, was inspired by an acorn woodpecker, but Woody appears to have been modeled after a pileated woodpecker. A pileated is more refined that Woody. Pileated means capped, referring to the crest of a woodpecker.

“If ant hills are high in July, the coming winter will be hard.” — Proverb

“To live is so startling it leaves little time for anything else.” — Emily Dickinson