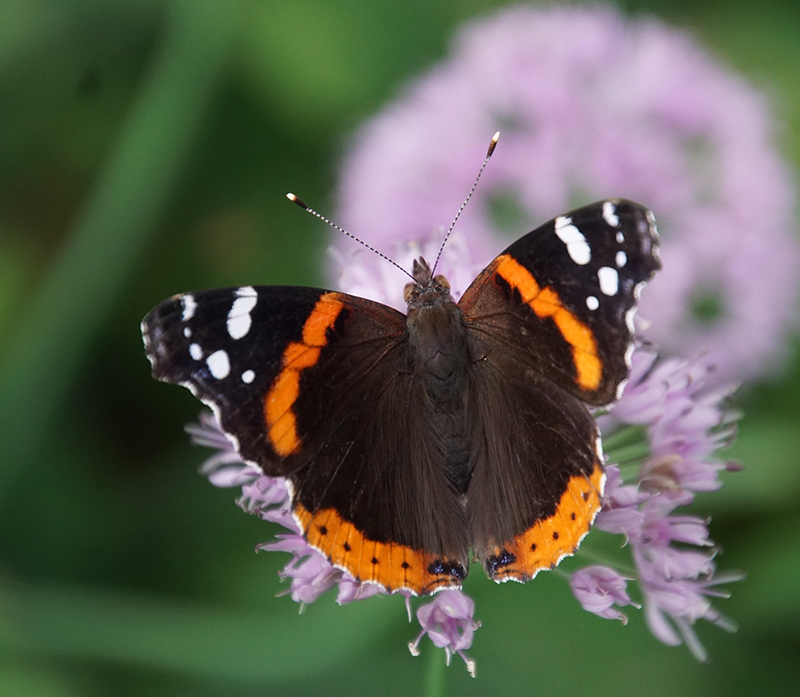 “Everything is nearly copacetic. I’m making a list of reasons why I should be happy to be a year older.”

“All I have is that I should be happy to be younger than I look.”

I staggered outside to begin my early morning walk. I was full of wonder and the spirit of adventure. I was greeted with the most spectacular view I’d seen since the day before. It was such a nice day, I wished summer had 1,000 days like it. Each day is fragile and fleeting, but a few more days of its caliber and a fellow could be deluded into believing the world had achieved perfection. Such thinking is an ancient and honorable tradition.

A sulphur butterfly landed on me. That brought good luck, I hoped. Butterflies and fireflies are people pleasers. Paul Peters of Ceylon heard the first cicada the third week of July. Late this year.

The neighbor’s rooster crowed as no politician or pundit could. Bee balm or wild bergamot Monarda, a native plant, bloomed. It’s attractive to bees and butterflies. It smells a bit like Earl Grey tea, but don’t hold that against it. Mints bloomed on square stems.

Each day, I’m amazed by my perpetual incompetence as a human being. I narrated a tour on the Pelican Breeze cruising on Albert Lea Lake. The boat overflowed with fine folks. I pointed out catalpa, bur oak and basswood trees. A nice fellow asked what another name for a basswood was. I had a brain cramp. I knew the name, but couldn’t think of it. I was a loser in my own personal game of Jeopardy. Aaarrrggghhh! Nouns can be ephemeral. It’s the American linden. They grow from the Iowa border north to the Canadian border in Minnesota. Basswood leaves are easy to recognize. They are large and heart-shaped, 4 to 6 inches long. They are dark green above and light green below, and edged with coarse teeth. In June, when it comes into bloom, the trees are loaded with clusters of fragrant, creamy-white flowers that perfume an area and attract pollinators. It’s an excellent source of honey. I remembered everything but its name. We’re directed to be humble. How can we be anything else?

1. Ponds covered with duckweed, which is a tiny, flowering plant.

2. Barn swallows gather on utility wires. They are the swallows with swallow tails.

4. Common nighthawks migrate overhead, appearing to have holes in their angled wings.

5. The gray, silken tents of fall webworms form in hardwood trees. They feed on leaves.

“Why do I see so many crows and vultures in fields of mowed hay?” American crows and turkey vultures are there for the food. They eat animals that didn’t survive the mowing. The crows also gobble up voles, mice and large insects that had limited cover. I see American kestrels also feeding on those fields. I once had the company of a red-tailed hawk that followed me when I was on a tractor because it knew that iron horse chased up prey.

“Each year there are Cooper’s hawks that nest near my home. This year, I haven’t heard or seen one. Any ideas as to why?” A study done at Southern Illinois University (Rachel M. Ehrlich and Lee M. Drickamer, 1993) found that Cooper’s hawks rarely reuse a nest, but frequently nest in the same area for several years. An interesting finding in this study was that the constant harassment of the hawks by blue jays limited the nesting choices of the accipiters. Mobbing rules! Something could have happened to the hawks or the nest tree. The young ones become quieter once they have fledged after being noisy in the nest. I watched a nest in a tall tree in New Richland. The next year, that tree had no nest. Accipiters nested several blocks away. I can’t be sure they were the same hawks, but it’d be an easy move without involving Mayflower or U-Haul.

Birds, bees, butterflies, blooms, gardens and hummingbird banding in handsome Henderson, Minnesota, on Saturday, August 17, from 9 to 4. I’ll see you there.

“If future generations are to remember us with gratitude rather than contempt, we must leave them more than the miracles of technology. We must leave them a glimpse of the world as it was in the beginning, not just after we got through with it.” — President Lyndon B. Johnson

“The best people possess a feeling for beauty, the courage to take risks, the discipline to tell the truth, the capacity for sacrifice. Ironically, their virtues make them vulnerable; they are often wounded, sometimes destroyed.” — Ernest Hemingway