A man is facing charges after he reportedly led authorities on a chase Wednesday night that started on U.S. Highway 69 in Twin Lakes and ended in Shoff Park in Albert Lea. 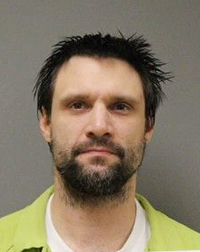 Nicholas Lee Tuttle, 36, of Albert Lea faces one count of fleeing a peace officer in a motor vehicle and one count of obstructing the legal process with force or violence.

According to court documents, the chase began after Tuttle reportedly stopped his vehicle near a Freeborn County Sheriff’s Office deputy vehicle on Highway 69 right before 11:30 p.m. Wednesday. Tuttle reportedly asked the deputy if someone had been following him, to which the deputy responded that there were no cars behind him.

Tuttle then allegedly went on to ask the deputy questions about the moon and what the date and year were.

“The deputy observed that the defendant was jittery, antsy, constantly moving and twitching,” court documents stated.

The court records stated because of the man’s odd behavior, his comments and his twitching, the deputy suspected he was under the influence of a controlled substance.

The deputy asked him for his driver’s license, and Tuttle allegedly started to back away and then eventually got in his car and drove away.

The deputy followed and activated his emergency lights and siren behind Tuttle’s vehicle. Speeds varied from 70 to 83 mph, and at times, Tuttle reportedly crossed the fog and center lines.

The chase ended at Shoff Park after Tuttle reportedly drove over stop sticks and then attempted to drive through an opening in the trees in the park and got his vehicle stuck. He then reportedly got out of the vehicle and ran into the wooded area of the park.

Officers yelled commands at Tuttle to get on the ground, but he did not comply, according to the report.

Tuttle reportedly charged at the officer as though he was going to fight him, after which the officer kicked the man and took him to the ground.

Tuttle continued fighting the arrest and was reportedly kicking his legs and would not put his hands behind his back. He was also reportedly sweating profusely and not making sense.

An Albert Lea officer believed him to be under the influence of a controlled substance.