‘We’re working on it’ 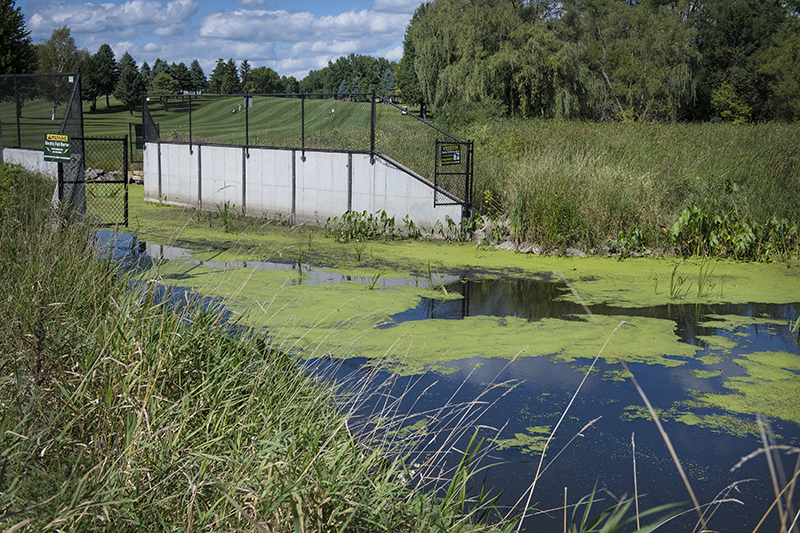 Electric fish barrier, turned off, still in process of fix after several years

Years after a fish barrier proved it was not functioning as intended, the Shell Rock River Watershed District has not yet been able to implement a fix.

“I know it’s taken longer than we want, but I just, I don’t want a Band-Aid fix either,” said Shell Rock River Watershed District Administrator Andy Henschel. “I want a permanent fix that’s going to work.”

The Watershed District finished installing its Goose Lake fish barrier in 2015. It sits near hole 17 on Green Lea Golf Course and downstream from Goose Lake, an 88-acre lake upstream of Albert Lea and Fountain lakes.

It was installed as the fourth fish barrier put in by the district in an effort to stop the migration of carp from spawning in shallow lakes, Henschel said.

Carp are a bottom-feeding fish, which means they disturb the sediment in lake bottoms as they feed. This resuspends phosphorus-rich sediment, affecting the lake’s clarity and discouraging rooted plant growth.

Goose Creek was found to be a significant contributor of phosphorous to Fountain Lake, according to a fact sheet assembled by the Watershed District at the time of the project.

An electric fish barrier uses electrodes in the water to deter fish as they begin to sense the electric current that causes discomfort and eventually — if they get too close — stuns. This is intended to deter fish from going upstream, Henschel said.

But according to Henschel, this is not what happened with the Goose Lake barrier when they turned it on in 2015.

“We were having a larger amount of fish fatalities within the area of the barrier,” Henschel said.

The barriers are not designed to kill fish. So what happened?

“The conclusion was … during certain flow events, there’s not enough flow through the barrier to push the fish off the electrodes,” Henschel said. “And without pushing them off, they stay on the electrode and then they end up perishing.”

He called the problem a “design issue.”

For Jill and Butch Harves, who live on the property that houses the generator used to power the fish barrier, it is a money issue.

“To me, it’s just a waste of taxpayer dollars,” Jill Harves said. “Either they fix it, or they take this fish barrier somewhere else, where it will work.”

Butch Harves said he ignores signs that warn him not to look for golf balls in the electrified water.

What is on is the generator used to power the fish barrier. 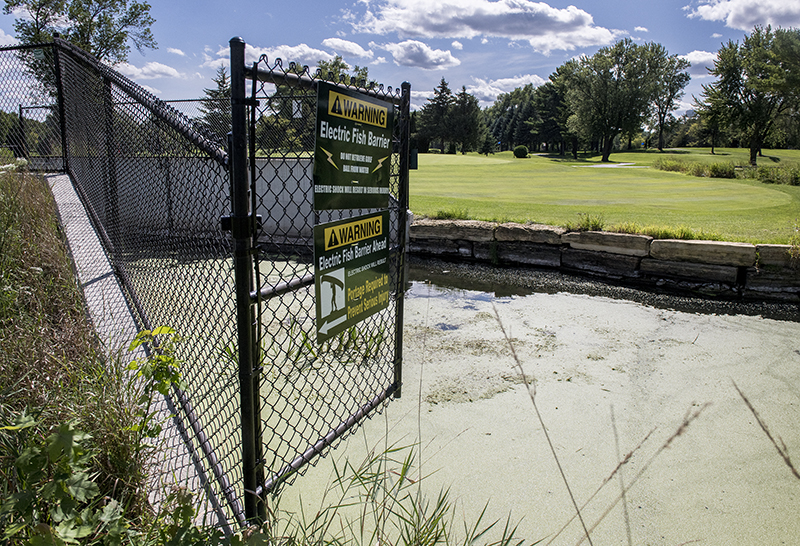 Henschel and the Harveses dispute how frequently the generator runs. Henschel said the generator runs once a week as standard operating procedure to make sure the batteries work. Butch Harves said it runs as often as twice an hour. It went off three times while he was mowing his lawn Monday, he said.

The generator was already on their property and the fish barrier already built when they moved in.

It is critical that the fish barrier generators work, Henschel said.

“A carp only needs about 30 seconds to get up that culvert and back into the lake,” he said.

But for the Goose Lake barrier, which is turned off, the generator still runs because the compartment the generator is housed in contains between $120,000 and $130,000 worth of equipment that needs to be climate-controlled, Henschel said.

The Harveses contacted Watershed District representative Mick Delger, who brought the barrier’s issues up at the Aug. 13 board meeting.

The Harveses said they support the Watershed District and its efforts.

“As a taxpayer, if that thing worked, I wouldn’t say a thing,” Butch Harves said. “But it doesn’t work.”

“This was basically, I think, one of the last tributaries that flows into Fountain Lake (that did not have a barrier) and we, again, we just felt it was a good thing to do for the community and the watershed,” Elseth said.

But he, too, is disappointed the barrier has not been running. He said he wants to see it utilized again — and functioning as intended.

“I think we all need more of an explanation, and for them to correct the situation,” he said.

The Harveses said they have contacted the Watershed District about the fish barrier and its generator.

They are, Henschel said — but the timeline has been long because there are several different factors that come into play when considering what a fix might be.

Big rain events make Fountain Lake rise and can make the water flow near the barrier, already an issue, slow down even more. The district also has to work with the Corps of Engineers during permitting to ensure that work does not create a flooding issue upstream. It is not easy to model or to figure out what the fix should be.

But they’re working on it, Henschel said; they are gathering information, running models and looking at different ideas.

“Out of all the projects, it’s been the most frustrating project the district has worked on,” Henschel said.

In the meantime, as the fish barrier is off, there is still carp recruitment — the introduction of new carp — through Goose Lake.

“Hopefully here in the near future, we’ll get there with a fix,” Henschel said.