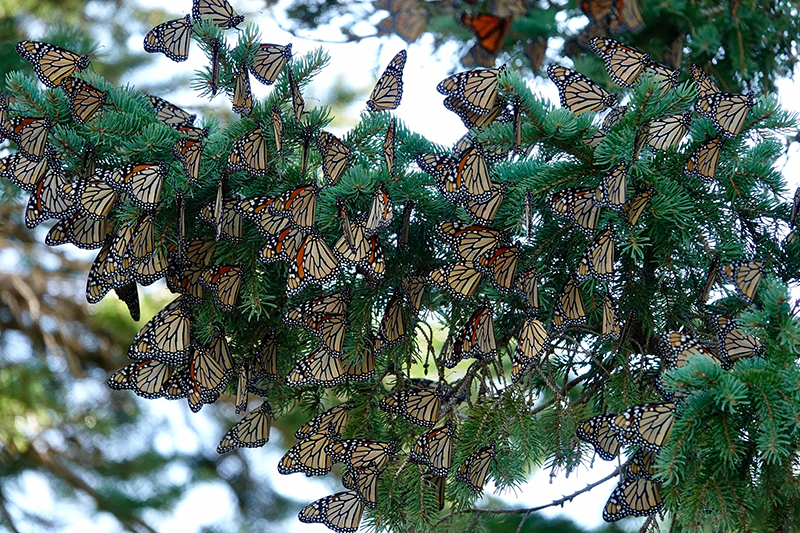 A tip of the hat to Dustin Demmer for pointing out this monarch butterfly roost. Al Batt/Albert Lea Tribune

“Everything is nearly copacetic. I’m still following the teachings of Julia Child who said, ‘The only time to eat diet food is while you’re waiting for the steak to cook.’ I was just reading about Minnesota nice. Minnesotans are nice, but that’s not a good thing.”

“That means I might not be a Minnesotan. I’m worried I’ll lose my Get Out of Minnesota Free card.”

I watched birds stock up on seed and feed as ragweed, green on green, carried its misery on the wind. Ragweed is wind-pollinated, so the flowers don’t need bright colors to attract pollinators. Its pollen sends season’s sneezing to hay fever sufferers.

I had a wonderful time at the Henderson Hummingbird Hurrah visiting with old friends and new friends from far and near.

I talked with Larry Pfarr, a garden expert on KSTP Channel 5, who had brought some of his honeybees to the Henderson Hummingbird Hurrah. Larry is a nice and interesting fellow who told me that every garden should have some blue color in it. It brings the sky to a garden. The question he gets the most often is: How do I get rid of creeping Charlie? His answer is to use an herbicide in the fall after a light frost and apply it again 10 days later. The applications are best done in early morning or evening. Larry said that the most popular perennial grown in gardens is the daylily, which is twice as popular as the hosta.

Rhonda, a retired elementary school teacher from St. Stephen, told me how hummingbirds had landed on her hands while she held a feeder. Her face lit up as she described the experience, saying the feeling of having a hummingbird alight upon her was akin to the sensation felt when she touched her eyelash lightly with her finger. 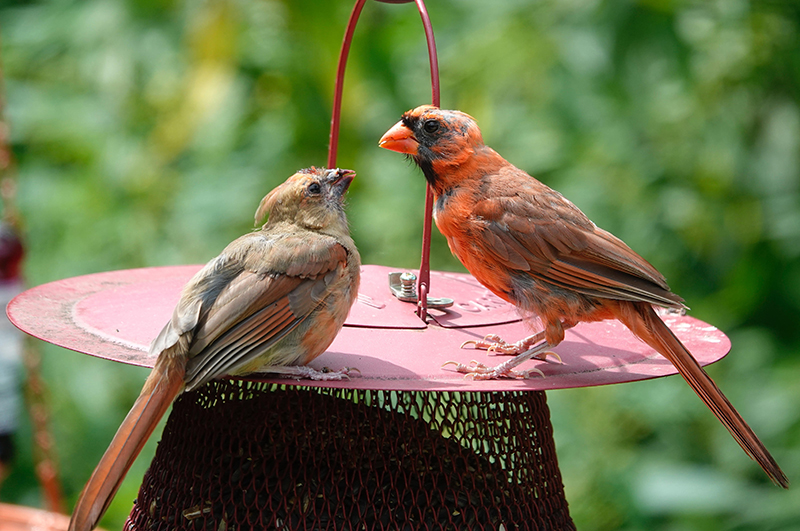 An adult northern cardinal has a red-orange bill. A juvenile has a gray to black bill. Al Batt/Albert Lea Tribune

A black vulture was seen at Hawk Ridge in Duluth. Only eight have been seen in Minnesota, but it’s a species moving northward. Last year, about 40,000 common nighthawks — not raptors — passed over Hawk Ridge. Nighthawks look skinny in flight and a white stripe on each wing makes it appear as if their wings have windows. Hawk Ridge gets approximately 18,000 human visitors each fall. Raptors migrate from as far the Arctic to wintering areas as distant as South America. Reluctant to cross a large body of water, they funnel down the north shore of Lake Superior, riding thermals and updrafts created by the shore’s topography. Hawks begin migrating past Hawk Ridge in mid-August and continue through November. Tens of thousands of broad-winged hawks fly over Hawk Ridge during Sept. 10 to Sept. 25. October is good for viewing the migration of eagles, rough-legged hawks, red-tailed hawks and northern goshawks.

“My old hummingbird feeder has no red on it. How can I attract hummingbirds to it?” Attach a red ribbon or place red geraniums near it.

A Morristown resident asked about the old saying, “You can catch a bird by putting salt on its tail.” Maybe someone thought salting a bird’s tail startled it so it might be caught. A neighbor boy thought salt contained magical powers that cast spells over birds. His sister told us the salt interfered with the bird’s ability to fly. There is no truth to be found in any of those beliefs. If you find yourself close enough to salt a bird’s tail, you wouldn’t need salt to catch it.

“Do purple martins eat many mosquitoes?” They could, but so could I. Neither of us eat many. Martins forage where and when mosquitoes aren’t. They prefer feeding dragonflies and damselflies to their chicks. The larger insects are more filling.

“What is the most common bird in the U.S.?”  It’s likely the domestic chicken. The most numerous wild bird is probably the mourning dove followed by the American robin and red-winged blackbird.

6. Milkweed pods open and their seeds are shed.

“In the end, we’ll all become stories.” — Margaret Atwood

“If we’re destroying our trees and destroying our environment and hurting animals and hurting one another and all that stuff, there’s got to be a very powerful energy to fight that. I think we need more love in the world. We need more kindness, more compassion, more joy, more laughter.” — Ellen DeGeneres