A St. Paul man was arrested Wednesday afternoon after leading authorities from multiple departments on a high-speed chase that started in Albert Lea and ended in Worth County with a Freeborn County Sheriff’s Office deputy firing three rounds. 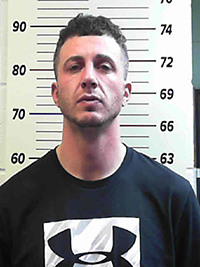 Ryan Joseph Amabile, 30, was found to have several felony warrants in Minnesota and was driving a vehicle with fraudulent license plates that was stolen from St. Louis Park.

According to an Albert Lea Police Department news release, the  Iowa Department of Criminal Investigation will investigate the shooting, with the assistance of the Iowa State Patrol.

The release stated during the course of the chase, Amabile reportedly struck at least two cars, displayed a handgun and attempted to carjack a 2016 Chevrolet Malibu in Worth County driven by a 20-year-old woman from Northwood.

He is expected to face charges in both Iowa and Minnesota.

According to the release, the chase started after Albert Lea police received a report of a possible impaired driver who was passed out in a vehicle at MarketPlace Foods.

Officers reportedly made contact with the man, who appeared to be under the influence. When asked to turn off the 2016 Jeep Renegade he was seated in, he initially complied but then allegedly turned the vehicle back on, drove across a landscape barrier and struck a vehicle, before fleeing through the Skyline Plaza parking lot and across the grassy shoulder to U.S. Highway 69, where he went northbound on Highway 69.

The pursuit continued southbound onto Highway 69 toward Lake Mills in excess of 100 mph in the wrong lane of traffic.

Freeborn County deputies attempted a maneuver to stop the vehicle that was not successful, and the chase continued into Lake Mills, where a Lake Mills officer joined in the pursuit eastbound on Winnebago County Road 105 toward Interstate 35.

On County Road 105 in Worth County, about one mile from Wheelerwood Road, Amabile reportedly displayed a handgun and attempted to carjack the Malibu.

Sheriff’s Office Deputy David Gilmore fired three rounds through his patrol windshield to stop the carjacking, and at that time Amabile went down to the ground and was taken into custody. He was later transported to the Worth County jail.

Drug paraphernalia was found in the vehicle.

Freeborn County Sheriff Kurt Freitag said Gilmore is on a standard two-day paid administrative leave and is encouraged to seek counseling if necessary.

Gilmore has been with the Sheriff’s Office for over four years and had nine years of law enforcement experience prior to starting with Freeborn County.