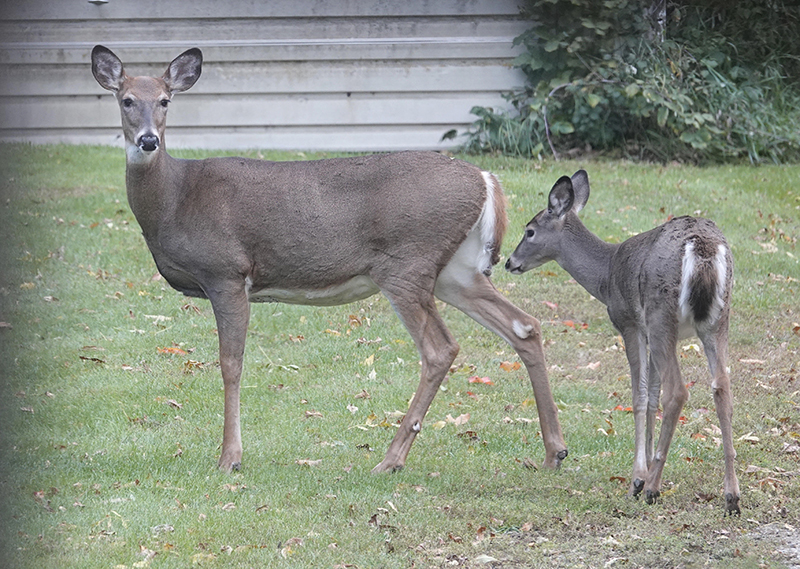 A mother with one of her triplets in Al Batt's yard. He reported she tried to line up all three for the photo, but it was like herding cats. Al Batt/Albert Lea Tribune

“Everything is nearly copacetic. I talked to Jimpossible at Saint Menard’s about a can of insect spray. I asked if it was good for wasps. He told me it wasn’t; it kills them.”

A caller told me that raccoons were running wild. No surprise. They are wild. Even mice run wild. Squirrels rustling in dead leaves can sound like buffalo. Our imaginations are capable of running wild, too.

Blue jays were making piping and clicking sounds until something set them off on a series of raucous jay calls. They tend to avoid deep forest, preferring edge habitats.

State Farm insurance produces an annual report on car crashes involving animals. West Virginia, Montana, Pennsylvania, South Dakota and Iowa are the top five riskiest states. Minnesota was No. 10, with 1 in 64 odds of colliding with a deer or other animal. U.S. drivers have a 1 in 116 chance of hitting an animal while driving. Chances more than double during October, November and December, the mating season for deer. The least likely places to hit an animal are District of Columbia with a likelihood of 1 in 826 drivers and Hawaii 1 in 731.

Audubon released a report, “Survival by Degrees: 389 Bird Species on the Brink,” a detailed look at the impact of climate change on birds by using the latest climate models and bird data available. Audubon scientists studied 604 North American bird species and found that 389 species are moderately or highly vulnerable to climate change. Since the Industrial Revolution began about 200 years ago and carbon emissions started building up in the atmosphere, Earth has warmed about 1°C on average. There are significant effects at that amount of warming, but most experts say the overall increase must be limited to 1.5°C. 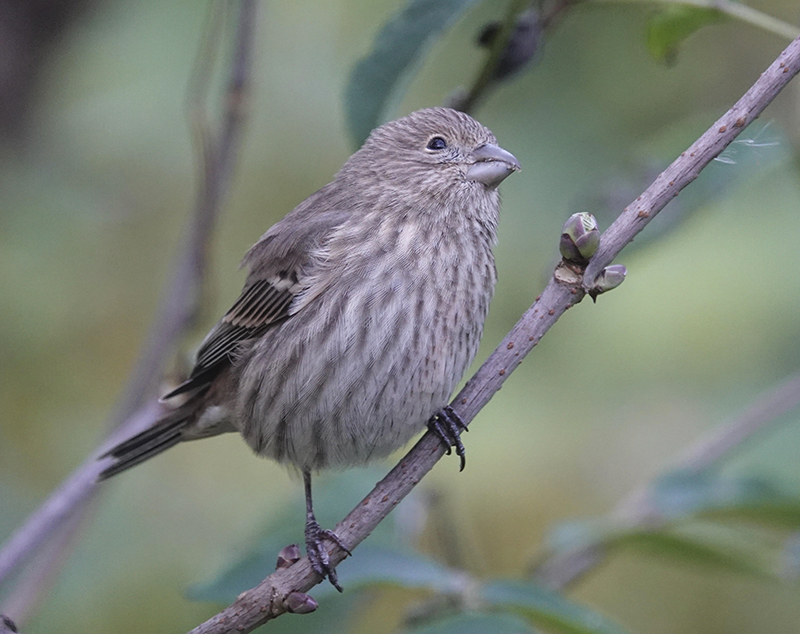 “Are all mushrooms edible?” Once.

“How much sleep does a bird need?” Each one needs just five minutes more. Birds are able to sleep with one eye open and the other closed. Studies found that a bird can sleep with both eyes closed and brain asleep, or it can rest half its brain by keeping one eye shut. This way, it can keep an eye out for predators. Holding half the brain at rest is called unihemispheric slow-wave sleep. Waterfowl excel at it. Some bird species are capable of grabbing a few winks while flying. I watched a bird catch a quick nap while perched on a tree limb. When the bird put weight on its feet, the muscles in the legs forced the tendons of the feet to tighten, keeping the foot closed. This gave the bird a firm grip on the branch and eliminated the chance of it falling. The amount of sleep needed is variable and I’m not sure any human knows for certain.

“Do house finches eat insects?” House finches are nearly vegetarian with approximately 97% of their diet made up of buds, seeds and fruits. They’re attracted to feeders offering sunflower or safflower seeds.

“Why don’t woodpeckers get concussions?” They hit trees like feathered jackhammers and they don’t wear safety helmets, yet there is no suet laced with aspirin. You’d think they’d suffer injuries and they probably do, but not as we would hitting trees with our faces. If I tried to be a woodpecker, I’d spend most of my time lying unconscious on the ground next to a tree. The bird’s smaller size helps. A woodpecker has a shock absorber, a cerebrospinal fluid, which suppresses vibration. It has an elastic beak and a dense but spongy skull that encloses the brain like the best bike helmet. Woodpeckers have a hyoid bone that acts like a seatbelt for its skull that allows them to hammer away at 15 mph. Another built-in safety feature of a woodpecker is that upon impact, an inner eyelid (nictitating membrane) closes over the eyes, holding them in place and protecting them from debris.

“How big is a roost of crows?” Crows have been congregating in roosts in the fall and winter for as long as there have been crows. The roosts range from small roosts of under 100 to spectacularly large roosts. A 1972 roost in Fort Cobb, Oklahoma, was estimated to hold over 2 million crows.

A friend named Kelly Preheim of Armour, South Dakota, received the 2018 Presidential Award for Excellence in Math and Science Teaching. She incorporates her passion for birding into the kindergarten classroom.

“I feel fairly certain that my hatred harms me more than the people whom I hate.” — Max Frisch

“Destroying species is like tearing pages out of an unread book, written in a language humans hardly know how to read, about the place where they live.” — Holmes Rolston III