Nature’s World: Grass massacre in lawn may be result of raccoon’s search for grub

“Everything is nearly copacetic. Sort of. I parked too far away from the drive-in window at a fast food restaurant and pulled a muscle grabbing for my food. So I’ve spent a couple of days licking my wounds and contributing to the great national waste of time. I have only two sets of silverware, but I’m too tired from wishing the rain would stop to do the dishes. I’m so hungry, I could spot a slice of pizza a mile away.”

A ruby-throated hummingbird got all up into my face. It hovered close to my nose. I read its actions as an indication the feeder needed filling, which it did, but the tiny bird might have been thinking I was a doofus flower. I filled the feeder as the hummer buzzed around me on the deck, impressing me with the flying ability of a creature weighing a dime or two. It was likely a young bird. Mature males are the first to head south, followed by the females. The immature birds are the last to migrate. An adult male ruby-throated hummingbird has a forked tail and dark tail feathers with no white tips. A young male or female has white tips on the outer three rectrices — large feathers used for steering and braking — on each side of its fan-shaped tail.

A few robins found the yard’s birdbath. One bathed while the others drank. House sparrows chirped cheerfully. I find them well worth my attention and hoped it meant they were experiencing joy. I saw some of these spatzies in a large, home improvement store. They are ingenious birds that have learned the highly specialized skill of opening automatic doors by fluttering in the right spot to activate electric-eye sensors.

I saw my first dark-eyed junco on October 5. Will it be six weeks until the first trackable snow?

“What is digging up the grass on my lawn?” Raccoons and skunks dig into lawns in search of grubs. Raccoons do the most damage and roll back sod in their quest. Skunks are more likely to tear clumps out of the grass.

“How long do young great horned owls stay with their parents after they’ve left the nest. Owlets move onto nearby branches when they are six weeks old and are capable of short flights at seven weeks. Fledglings remain close to parents for several weeks and thereafter in a loose association. Owlets often roost together in the same tree while the adults generally roost away from their young. The youngsters react to the sight of the adults with begging calls and flights towards the adults. Young owls remain near their parents throughout most of the summer and may beg for food into October, four to five months after leaving the nest.

“What is Indian summer?” It’s a short period of above normal temperatures occurring on sunny, calm, and hazy days following fall’s first frost.

“What bird is the fastest runner?” Despite educational cartoons featuring Wile E. Coyote, it isn’t the roadrunner. The ostrich has been clocked at 43 mph, the roadrunner at 20. 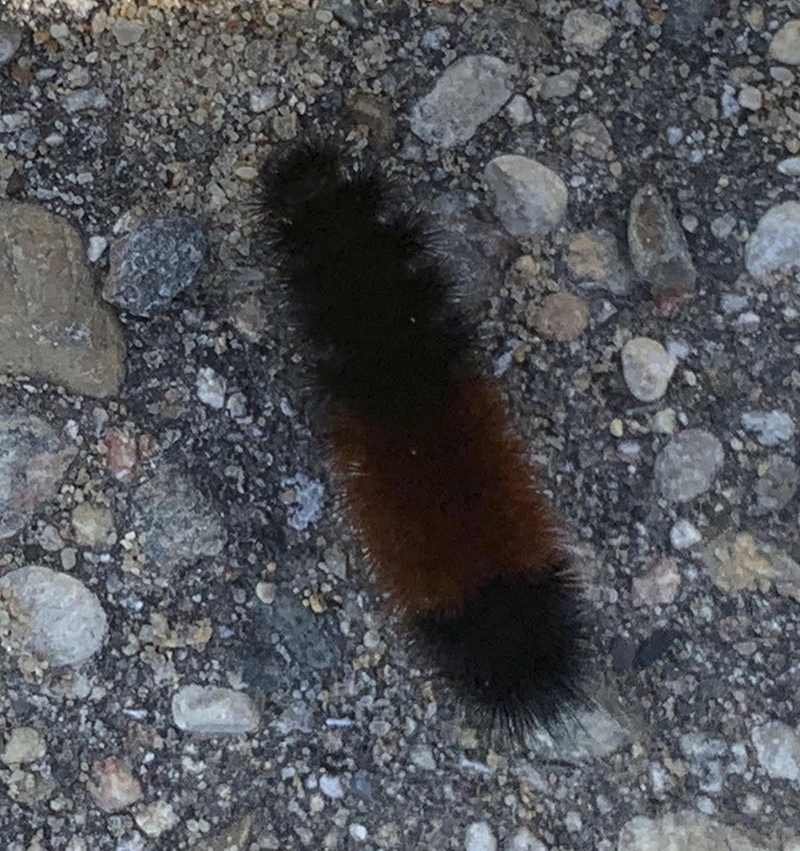 2. The first deer rubs on trees show up around the middle of October. Rubs are continually made and refreshed throughout November. Deer scrapes made in the ground with hooves can be observed earlier, but become common during the last couple weeks of October and increase in frequency into November.

3. Woolly bear caterpillars (woolly worms) crawl across roads. Folklore maintains that the wider the rusty brown band on a caterpillar, the milder the coming winter will be. The narrower that band is, the more severe the winter will be.

4. Someone will swear he isn’t turning on the furnace until he has a numbness in his extremities.

6. People will channel the flannel.

7. Buckthorn stubbornly hangs onto its leaves.

We have a winner

“There are few things in this world which it is worthwhile to get angry about, and they are just the things anger will not improve.” — Henry Jarvis Raymond

“Why should man value himself as more than a small part of the one great unit of creation? And what creature of all that the Lord has taken the pains to make is not essential to the completeness of that unit — the cosmos? The universe would be incomplete without man; but it would also be incomplete without the smallest transmicroscopic creature that dwells beyond our conceitful eyes and knowledge.” — John Muir