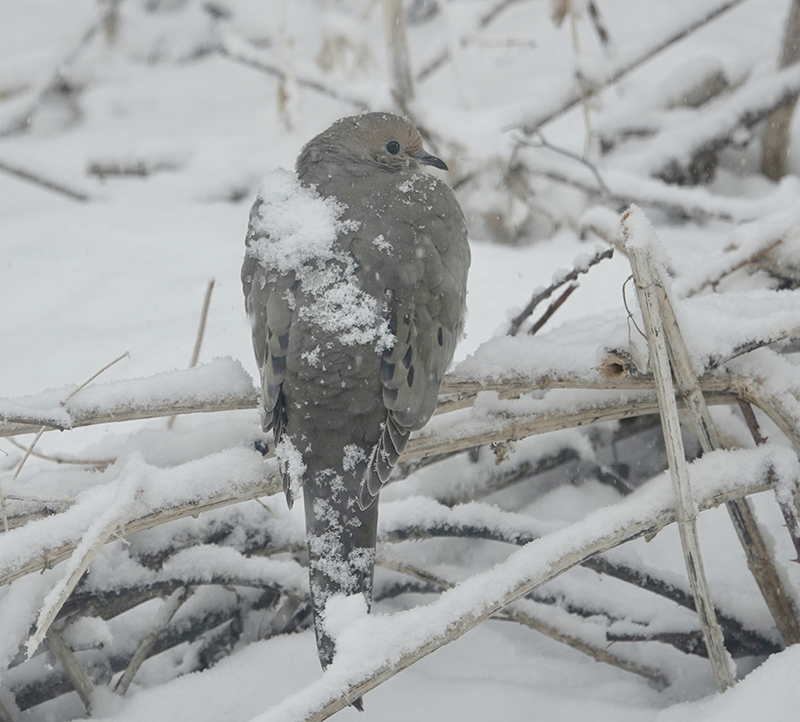 “Everything is nearly copacetic.

Dogs are following me around. I wish it were because I’d eaten too much bacon, but it’s because the cold weather makes my nose whistle.

I’ve been eating Limburger cheese and sardine sandwiches. It’s a Christmas tradition of mine to eat sandwiches that cause people to say, ‘Ewww! What’s that smell?’

I was doing some full-contact Christmas shopping in a combat zone otherwise known as a store, when someone bumped into my parked car. They left a note.”

It was a calm day. Geese seldom migrate against a strong wind. They wait for the wind to blow from the right direction and go with it.

I watched juncos, often called snowbirds, feed on the ground. Some people consider this bird a harbinger of winter. That’s a miserable responsibility for a lovely, little bird.

Snow had given my world a natural texture. December and January are typically our snowiest months. Red squirrels tunnel under and through snow. They are much more likely to do so than gray or fox squirrels. Weasels (ermine) tunnel through snow in search of voles, mice, and shrews.

Deer, turkey and squirrel dig for acorns in the snow. I sampled acorns when I was a boy. I had to. I was a boy. The acorns weren’t tasty. They needed frosting.

It was a real pane

I feel terrible when a bird hits a window of our house. “That’s it!” I say to my long-suffering wife, “We’re moving to a cave.”

The temperature had fallen below zero as my wife and I rang bells for the Salvation Army. I heard the demoralizing thud of a bird crashing into a store window. My wife spotted a female house sparrow that had fallen to the concrete. I held the bird in my closed hands. The warmth helped. I opened my hands and the bird flew off. I felt good about having a tender soul. Later, I heard house sparrows chirping. I hoped that bird was one of them. 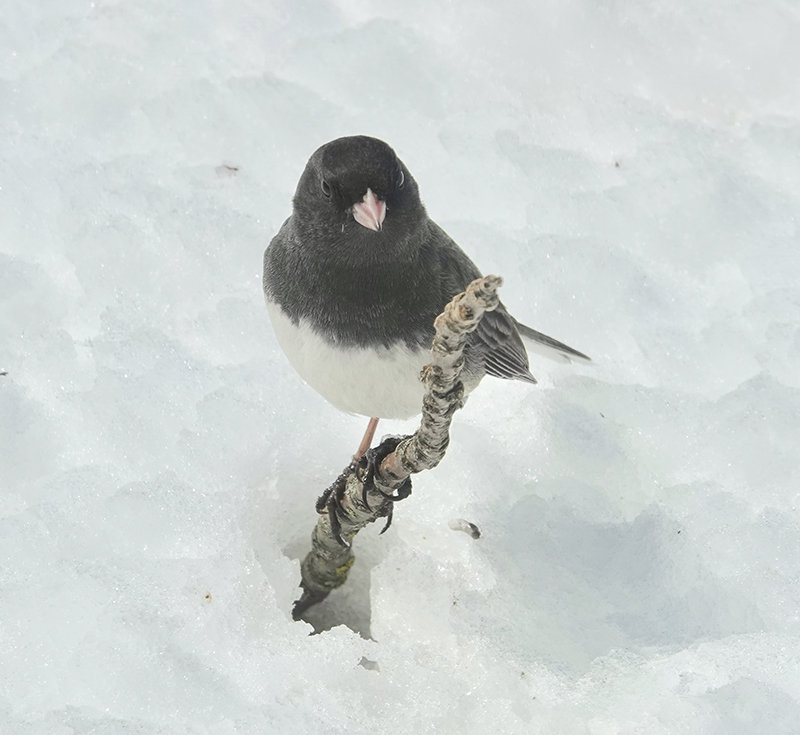 A junco can stick it out during Minnesota winters. – Al Batt/Albert Lea Tribune

“Where do juncos nest?”

Dark-eyed juncos breed in forests across much of North America, including northeastern Minnesota. The female chooses the nest site, typically on or near the ground in roots, moss, or grasses — occasionally nesting off the ground.

“Do bears need to eliminate waste during hibernation?”

Scientists don’t agree whether or not bears are true hibernators. Some people of science maintain bears enter a sleep-state called torpor. Torpor, like hibernation, is a survival tactic used to survive the winter months, and is triggered by colder temperatures and decreased food availability. Torpor involves decreased breathing and heart rates, and lower metabolic rate, but not the dramatic decrease in body temperature often associated with true hibernation.

No matter what it’s called, do sleeping bears need to use the little bear’s room or do what bears do in the woods? Bears are able to sleep 100 days without passing waste. Bears avoid eliminating metabolic wastes by recycling them. Bears lose fat and may gain lean muscle mass while sleeping. They need to do an infomercial.

“What towers kill the most birds?”

It would be the tall structures like the radio and TV towers that have guy wires. The guy wires can be treacherous for flying birds. The lights on those towers can confuse birds in foggy weather, causing them to fly into the guy wires. Self-supporting, shorter towers are less of a problem because they lack guy wires. Studies have found wind turbines are murder on bats.

My thanks to all who attended my presentation at the Albert Lea Seed House. I didn’t take attendance, but I appreciate those who phoned, emailed or sent notes via the USPS explaining their absences. Written excuse slips! I do know the best people on earth.

“I like long walks, especially when they are taken by people who annoy me. — Fred Allen

“The best Christmas trees come very close to exceeding nature. If some of our great decorated trees had been grown in a remote forest area with lights that came on every evening as it grew dark, the whole world would come to look at them and marvel at the mystery of their great beauty.” — Andy Rooney