Lowell E. Baker, 88, of Albert Lea, formerly of Rochester, passed away on Thursday, Dec. 5, 2019, at St. John’s, The Woodlands. Memorial services will be at 11 a.m. Friday at First Lutheran Church in Albert Lea, with visitation beginning one hour prior. The Rev. Jan Crissinger will officiate. Burial will take place at Graceland Cemetery. 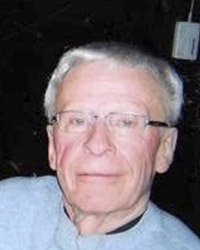 Lowell E. Baker was born June 26, 1931, to Merill H. and Ebba (Nelson) Baker in Winona County. Growing up in the Winona area for much of his early years, Lowell’s family moved to Albert Lea. Lowell was confirmed at First Lutheran Church in Albert Lea and graduated from Albert Lea High School in 1949. In 1952, Lowell was married to Adeline Gladys Olson. Together, they had three children. They later divorced in 1975. In 1976, Lowell married Bev Hrubetz.

Lowell was a salesman for over 50 years with a small number of insurance companies, namely Minnesota Protectant and AFLAC. Job opportunities moved Lowell and Beverly to Wisconsin in 1980, and in 1987, they made their home in Rochester where he lived until moving to St. John’s.

Lowell was a member of Bethel Lutheran Church in Rochester, where he was active in Bible study and the church choir. His community involvement extended to participating with Moose Lodge ritual staff and becoming members of the Elks and American Legion.

Lowell’s biggest love was flying. He was an experienced pilot of more than 50 years with extensive knowledge of civilian planes. Annually, Lowell would fly a plane on floats to Canada for fishing trips. Lowell also loved hunting and snowmobiling and had a great appreciation for music.

Lowell was the epitome of an extravert. He was a livewire and amazed people with his stories and tales. Never meeting a stranger, Lowell would either constantly run into people he knew, or could make a mutual connection.

Lowell is survived by his wife, Bev Baker, and her son, Mark, both of Rochester; his sons Larry Baker (special friend, Susan) of Albert Lea, and Steve Baker of Pacifica, California; and his daughter, Pam (Craig) Quinlivan, of Albert Lea; three grandchildren, Rachel (Rony) Magnuson of Corning, Joshua Baker Quinlivan (special friend, Morgan, and her daughter, Kayden) of Albert Lea, and Elizabeth (Josh) Van Der Brink of Ireton, Iowa; and seven great-grandchildren, Elly, Alexyss, Grace, Grant, Savanah, Macy and Liam; and one great-great-grandson, Oliver. Lowell is also survived by his sisters, Pat Heining of Victoria, and Karen Houge of Albert Lea, and many nieces and nephews.

He was preceded in death by his parents, brothers-in-law Al “AJ” Houge and Marlin Heining, and many aunts and uncles.