Al Batt: The age-old question — Is a tomato a fruit or is it a vegetable? 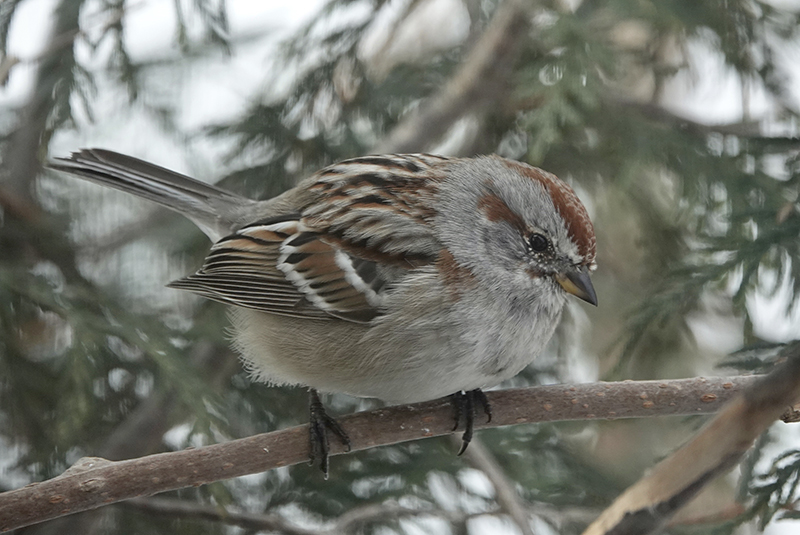 Although this one is clutching a branch, the American tree sparrow is more at home on the ground. - Al Batt/Albert Lea Tribune

“Everything is nearly copacetic. New Year’s is a holiday created by the calendar companies who don’t want anyone reusing last year’s calendar. I had to buy a piece of farm equipment because I needed a new jacket.”

“You know, you can purchase a jacket without buying a new implement,” I say.

“I know, but I wanted the jacket for free.”

The point in Earth’s elliptical orbit around the sun where it’s closest to the sun is called a perihelion. It happened on January 5th. I hope you remembered to send it a card.

There were many creatures in the yard trying to keep their New Year’s resolution to not be eaten by a predator. A shrew was under the feeders eating what it could find. The tiny mammal has the metabolism of a blast furnace.

Squirrels wore trails in the snow to get to the corn I’d put out for them. Squirrels are locavores. They eat where the locals eat and that includes bird feeders.

Goldfinches fed upon the nyjer seed. Sometimes I wish the American goldfinches were a bright yellow all year, but then I realize they are spectacular in any color. They experience a complete molt twice a year. In the fall, the male trades his bright yellow feathers and black cap for an olive-green wardrobe with dark, blackish wings and pale wing bars. He becomes yellow again in the spring. Adults and juvenile goldfinches have similar dull olive-green plumages during the late fall and winter. The color of the bills of goldfinches change with each molt, too. In winter plumage, their bills are drab grayish brown. In breeding plumage, they change to an orange color. My father often referred to them as wild canaries.

I took part in a Christmas Bird Count (CBC). Everyone who counts was there. Everyone dressed for a pleasant winter day. It was a regular fleece circus. One of the participants, Mark Johnson, gets a CBC haircut every year. This year, his hair was trimmed to resemble a zebra. Last year, it was a pileated woodpecker. Other years have featured an indigo bunting and a tufted puffin. When asked why he does it, Mark replied, “It keeps me single.”

I walked six miles counting birds. It was a lovely day, but a breeze did find a way of intruding. I’ve been told by those who suspect things that the wind here blows 364 days a year (365 on Leap Year) and then takes one day off to catch its breath. 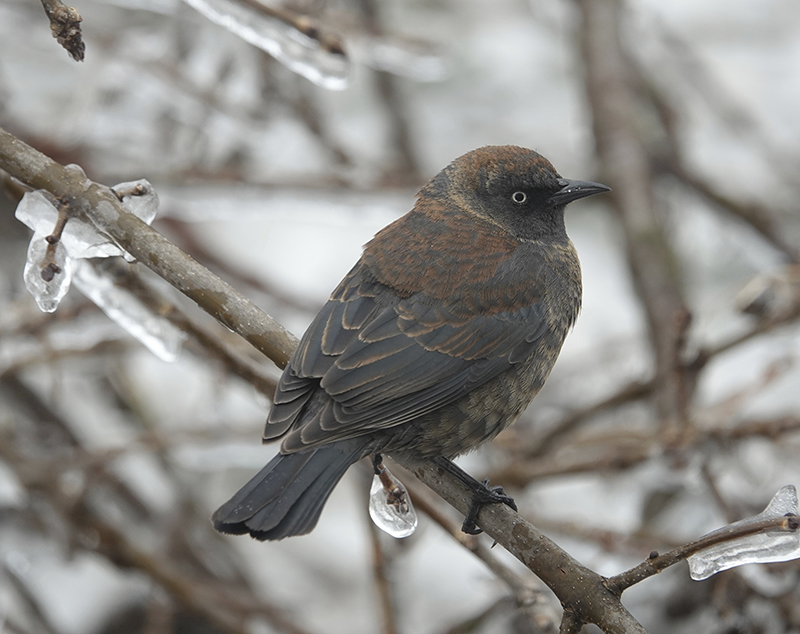 The rusty blackbird breeds in bogs and around beaver ponds in the far north. – Al Batt/Albert Lea Tribune

“Is a tomato a fruit or a vegetable?”

A fruit is a seed-bearing structure that develops from the ovary of a flowering plant, whereas vegetables are all other plant parts, such as roots, leaves and stems. That means tomatoes, beans, peppers, pumpkins, and peas are fruits, but look for them in the vegetable department of your favorite grocery store.

No, and I doubt you’d find any turkey hunter who’d accuse them of it. They’d say that hunting a turkey is a great challenge. I suspect the young males (jakes) come the closest to acting stupid.

“Are there fewer insects today?”

I’d be surprised if there weren’t. We’ve been waging a constant war against them.

“A hawk is getting after my birds at the feeders. What can I do?”

It’s likely a Cooper’s hawk (they nest here) or a sharp-shinned hawk. Try hitting the pause button. Shut down the feeders for a bit. The birds will stop showing up and the hawk will get the hint and hunt elsewhere.

“What is the territory size of a rabbit?” According to the DNR, the range of an eastern cottontail is no more than five acres (about the size of four football fields).

“Why have I been seeing and smelling skunks this time of year? Shouldn’t they be hibernating?” Once settled into its winter home, the striped skunk becomes dormant, but doesn’t enter a full state of hibernation. Skunks enter a state of torpor – a deep sleep from which they awaken occasionally. They may emerge briefly from their dens at any time during winter.

“Is seeing a cardinal supposed to bring good luck?” I think so. I consider myself lucky whenever I see one. I’ve been told that when we hear a cardinal sing, our sadness will soon be lifted. And when we see a redbird in winter, we will prosper in spring. I’ve also heard it said that if a bird poops on you or anything you own, it foreshadows good luck.

“Wonder is the salt of the earth.” — Maurits Cornelis Escher