Al Batt: Why do snowy owls fly south in the winter if they’re snowy? 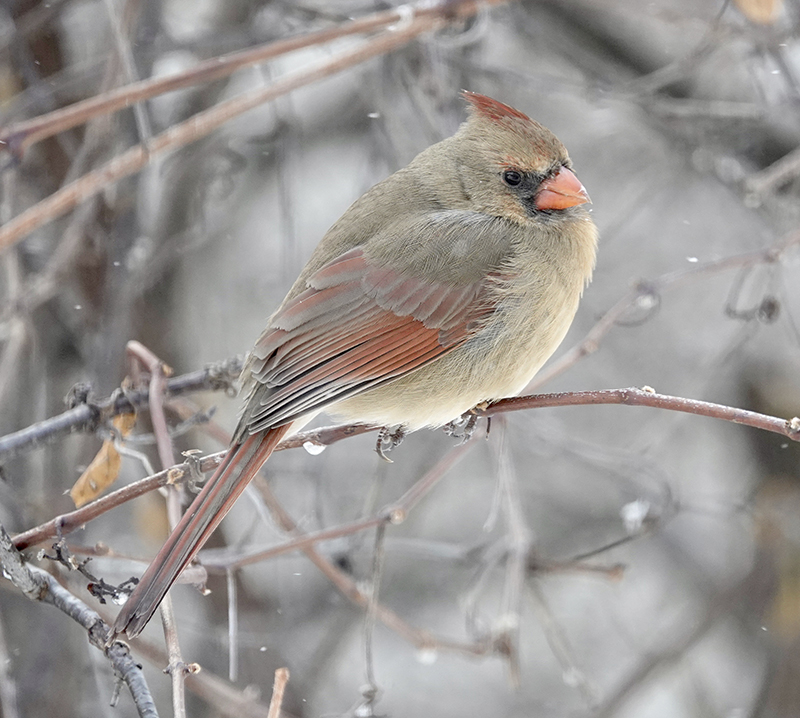 The female cardinal is a beauty. I hope she brings you good luck. - Al Batt/Albert Lea Tribune

“Everything is nearly copacetic. Once you get past the first day of winter, there are only 300 days of winter left. I’m saving on my fuel bill this year. I bought a heated toilet seat and turned the furnace down.”

It was another day in paradise with no normal to the weather. The nice weather had coaxed a raccoon from its winter napping place. Trash pandas have sharp minds and strong paws.

A window is a lens to the outdoors. It’s nature near at hand. Everything is new and different. Every window is unique. John Muir said, “Between every two pines is a doorway to a new world.”

The morning had gathered enough light that I was able to marvel at a handsome white-tailed deer. The buck, with impressive antlers, paid little attention to me as it was watching a coyote trotting past. The coyote paid no attention to either of us. I gloried in the lovely red color of the red-twig dogwood, otherwise known as: Red-osier dogwood, red willow, red brush or dogberry tree. Charismatic chickadees attacked a feeder’s sunflower seeds. Like any cafe owner, I appreciated the regulars.

Phil Morreim of Albert Lea had 24 squirrels on the deck of his home. He gets that many because he feeds them well so they’ll leave his bird feeders alone. Among this scurry were four black squirrels. Black squirrels are gray squirrels in disguise; a color variation, not a separate species. The color is the result of a genetic mutation that causes excessive pigmentation. They are melanistic, which refers to melanin, a dark pigment. The black fur offers a thermal advantage, enhancing survival during extremely cold winters.

There are eight members of the weasel family in Minnesota — short-tailed weasel, long-tailed weasel, least weasel, American marten, fisher, river otter, badger and mink. I watched a mink lope along. I had a bit of nature awareness available that allowed me to notice the mink and realize that it wasn’t wishful seeing. I used a technique I’d learned years ago. I stood motionless with a fixed gaze. I hoped to gain the wide peripheral vision of an owl. Stillness and a wide-angle vision cause motion to become evident. It’s not difficult. Imagine you’re an owl. Look straight ahead and pretend your eyeballs cannot move in their sockets. Pick a spot directly ahead of you and train your eyes on it. Hold that spot in the center of your vision as your focal point. If your eyes wander, bring them back to your focal point. Always return to that spot. While staring at it, you can see some ground between you and that spot, and some sky between you and that focal point. You can see the ground, the sky, and that spot all at the same time using your peripheral vision. This is called having owl eyes.

An easy way to see things in nature is to look beyond your cell phone.

As winter begins, I had a thought. I have one occasionally. The warblers wintering in warmth are counting the days until they return here.

A black squirrel, or a gray squirrel in disguise? – Al Batt/Albert Lea Tribune

“How far away should I haul a squirrel I’ve live trapped to make sure it won’t return?”

I don’t know. There is a paper, “Movement and Mortality of Translocated Urban-Suburban Grey Squirrels,” published in 2004 by Adams, Hadidian and Flyger, which focused on live-trapped, radio-collared squirrels that were moved from a suburb of Washington, D.C. to a large wooded area. The study found that 97% of the relocated squirrels died or disappeared from the release area within three months. Relocated squirrels have difficulty finding food, water, safe hiding places and shelter. Being dumped in the home range of other squirrels leads to territorial disputes. There are rules and regulations that could apply. It’s unlawful to release wildlife on state-owned lands without permission.

“Why do snowy owls fly south in the winter?”

Scientists once believed the owls left because they were starving in the Arctic, having exhausted the supply of their primary prey item, lemmings. However, many of the travelers are relatively healthy and well-fed. Their visits may indicate it was a boom year for the birds and the population was so high they couldn’t all stay in the Arctic. The owls move for food availability or due to population density.

Listen for these current events with your good ear

1. The whistled “fee-bee” song of the black-capped chickadee.

2. The drumming of the downy woodpecker on a resonant surface.

“At some point in life the world’s beauty becomes enough. You don’t need to photograph, paint or even remember it. It is enough.” — Toni Morrison

“The world is my country, all mankind are my brethren, and to do good is my religion.” — Thomas Paine

Across the Pastor’s Desk: Receive the gift of Christ’s love

Robin Gudal: We need to be alert, awake and alarmed

Across the Pastor’s Desk: Give gifts of peace, goodwill all year

Across the Pastor’s Desk: God can be a shield in hard times

Al Batt: Robins and cedar waxwings in winter, and…