A 29-year-old woman was arrested Tuesday night in Albert Lea for reckless discharge of a firearm after police received a report of gunshot holes in a residence on Clayton Avenue. 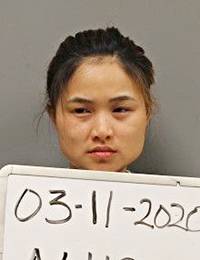 Police were dispatched at 11:43 p.m. on an initial report that a person had heard a gunshot and found holes in the back door of their residence at 2330 Clayton Ave, according to a press release.

Officers arrived and confirmed that the victim’s residence had been struck by two small caliber projectiles. One of the projectiles entered the house through an exterior door and traveled through an interior wall before ending up in a furnace. The second round appeared to strike the upper fascia of the residence.

The release stated there were multiple people within the residence at the time of the incident, but no injuries were reported.

Officers determined that the projectiles came from an adjacent residence at 2328 Clayton Ave.

When interviewing two people at that residence, officers learned they had discharged a small caliber rifle within their residence during what they described as “target practice.”

Police conducted a search warrant at the house and found and seized a firearm and ammunition that was believed to be used.

Police arrested Shell Paw Bor and transported her to the Freeborn County jail.

The Police Department stated this is an isolated incident and does not believe there was any intent on harming others.

Albert Lea police were assisted by the Freeborn County Sheriff’s Office at the scene.