Al Batt: Why do birds stand on one leg? 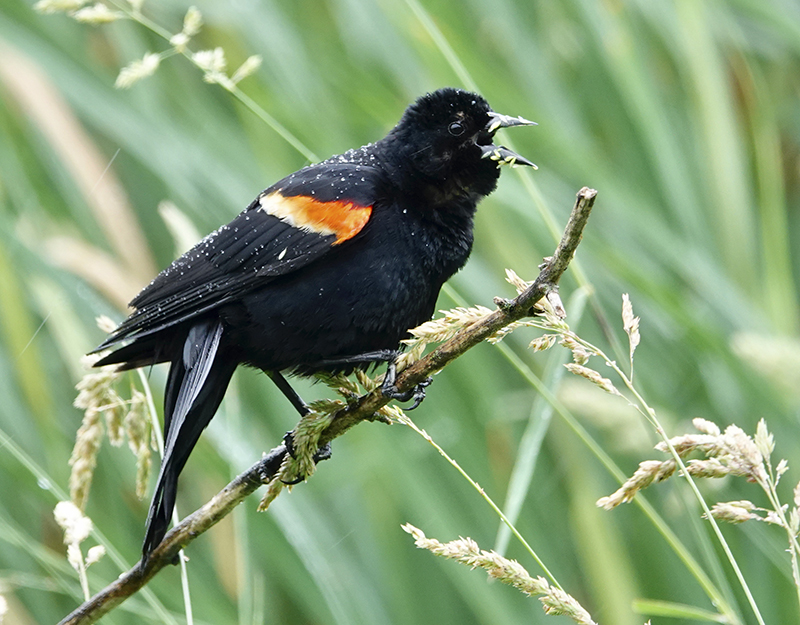 It was a lovely day. I hoped everyone recognized it as such. I walked amongst the trees while trying not to think of Leif Erickson, Branch Rickey, Twiggy or barking my shins. Folklore says as it rains in March it rains in June.

A song sparrow often has a dark spot in the center of a streaked breast and dark feathers resembling mutton chops under its bill. Song sparrows are persistent singers throughout spring and summer. I try never to let their song go to voicemail. Its scientific name Melodia means “melody” in Greek.

A northern flicker, an avian anteater, fed on the ground. I heard the rattling gu-rrroo calls of sandhill cranes flying high in the sky. A pair of American kestrels flew overhead on bent wings with swept back tips as they exchanged excited “killy” notes. These handsome falcons nest in cavities and likely nest in every county in Minnesota. It resembles a mourning dove when perched on a utility wire.

Paul Peters of Ceylon reported many wood ducks this year. The Wood Duck Society says wood ducks return as soon as ice melt occurs, with egg-laying beginning shortly thereafter, with an initial egg-laying peak in early to mid-April. In southern Minnesota, small sloughs often open up toward the end of March. Wood duck hens in the north have only one brood per season. If an initial clutch of eggs is destroyed, they often nest again. Nearly all cavity nests have been started by late May to early June. In Minnesota, only an occasional hatch occurs as late as August.

I attended a NABS (North American Bluebird Society) and BAN (Bluebirds Across Nebraska) Conference in Kearney right before COVID-19 hit. Bluebirders let their passion shine through. There were folks from 23 states and two provinces there. John Muir’s editor, Robert Underwood Johnson, repeatedly encouraged Muir to reduce his use of the words ‘beautiful’ and ‘glorious’ in his writings. The rosy glow of the sun highlighted sandhill cranes on the Platte River. The birds appeared to be a simple, but elegant string of pearls. Their voices evoked mysteries. Muir would have called them beautiful and glorious.

“Why do birds stand on one leg?” They do that when standing on a bathroom scale. We’ve all tried that. They also do it to minimize energy loss.

Mark Sorenson of Hollandale asked why a pair of bald eagles builds a second nest. There could be a number of reasons: A mate is lost, the site is disturbed, nest failure, or damaged nest tree.

“You wrote you’d seen a scissor-tailed flycatcher in Minnesota. What does that bird eat?” They eat scissor-tailed flies, of course. That’s a fib. They eat insects, particularly grasshoppers, crickets and beetles, and occasionally fruit. The migratory bird breeds from northeastern Mexico north through New Mexico, Texas, Oklahoma, Colorado, Kansas, Missouri, Arkansas, and Louisiana. It’s the state bird of Oklahoma. The last one I saw in Minnesota was in 2017.

In the February issue of “Birding,” a publication of the American Birding Association there was a story by Mel Goff of Colorado who wrote of his quest to see every state bird: “Anyhow, there were reports of loon sightings at State Line Lake in Emmons, a small town on the Minnesota-Iowa border. We drove through a lot of rain along the way, but the morning of May 22, 2018, offered sunshine, warm temperatures, and a migration fallout at Gateway Park in Emmons. In our morning at the park, we recorded over 60 species. The trees and shrubs on the park held more than a dozen warbler species, including a beautiful Connecticut Warbler, a life bird for us. And in the aftermath of that rare warbler, an afterthought: a Common Loon on the lake.”

The same issue featured a friend, whose introduction was: “Carrol Henderson richly deserves his reputation as a bird’s best friend. during a 45-year career with the Minnesota Department of Natural Resources, he helped bring back Trumpeter Swans and Peregrine Falcons, helped create the Pine-to-Prairie International Birding Trail in Minnesota and Manitoba, pioneered studies of lead poisoning in Bald Eagles, and worked to restore Common Loon and American White Pelican populations lost from the Deepwater Horizon oil spill in 2010.”

“And time remembered is grief forgotten, And frosts are slain and flowers begotten, And in green underwood and cover, Blossom by blossom the spring begins.” — Algernon Charles Swinburne

“We who lived in concentration camps can remember the men who walked through the huts comforting others, giving away their last piece of bread. They may have been few in number, but they offer sufficient proof that everything can be taken from a man but one thing: the last of the human freedoms — to choose one’s attitude in any given set of circumstances, to choose one’s own way.” — Viktor Frankl