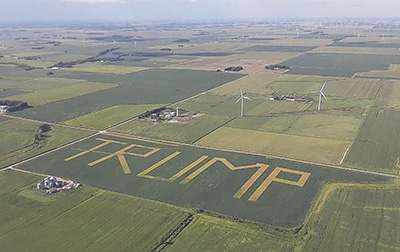 This photo, taken from the air, shows the scope of Darin Voigt’s work to show his support for the president. Photo provided

As the election season draws near, candidate signs are covering yards and highways throughout the nation.

Darin Voigt, a lifetime farmer who lives near Taopi, had a head start on those signs and he also has one of the biggest beacons representing his candidate of choice. Voigt, who is 42 years old, strategically planted his soybeans back in May so they would grow into a giant 12-acre Trump sign in honor of President Donald Trump. 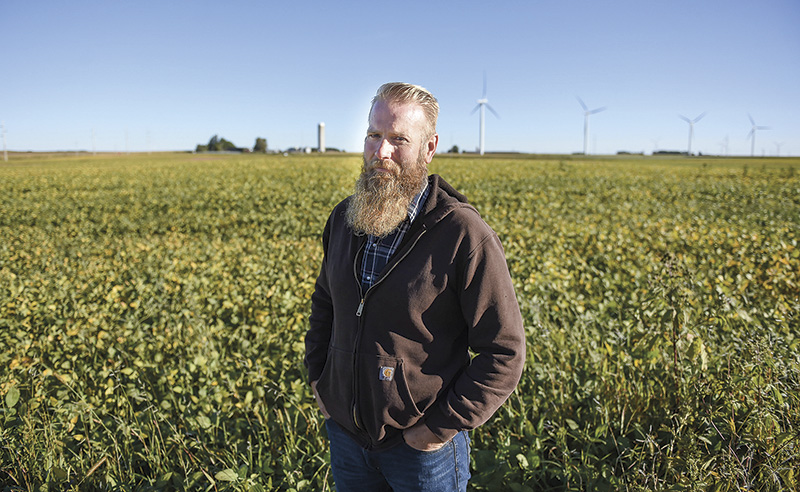 Darin Voigt, a rural Mower County farmer, stands next to the field in which he showed his support for President Trump by planting two varieties of beans in his field in such a way as to show Trump’s name as the crop matured. Eric Johnson/Albert Lea Tribune

“I like what the president has done for us as farmers and I wanted to do what I could to support him,” Voigt said. “You don’t hear a lot of presidents talk about farmers like he does.”

The end result left the word “Trump” in yellow letters which are now beginning to turn brown as summer gives way to fall. Voigt has had a lot of feedback about his field and his son’s professor even asked if he was related to “the guy who has the Trump field” when he arrived at college.

Voigt has also seen reactions from the planes that fly around his farm.

“There’s a lot of smaller airplanes that fly over our field and then they make a big loop and fly back to where they were going,” Voigt said. “I think the word is kind of out there.”

Voigt has only flown once in his life, but he’s had friends and neighbors send him photos of what his field looks like.

Voigt, who used to consider himself a supporter of the Democratic party, clarified that he isn’t out to create division or cause trouble. He simply wants to support a candidate in a unique way.

“I don’t hate Democrats and I’m not anti anything. I just feel like someone who can run a business can run our country,” Voigt said.

The presidential election is set for Nov. 3.