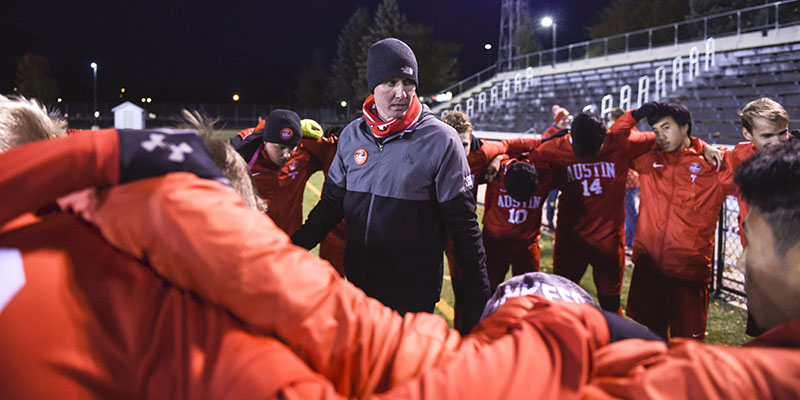 Austin boys soccer coach Jens Levisen talks to the team before a playoff game in 2018. Levisen, along with the Packers’ Henry Tolbert have been honored on a national scale. File photo

Levisen was overwhelmed and shocked when he found out he and Tolbert had received the awards, but he thinks the recognition is great for the entire soccer community in Austin.

“It’s an incredible honor and I’m still just trying to take it in,” Levison said When I heard about the award, I had to ask him to repeat it. I had to hear it again to make it seem real. I don’t have words for this. It’s incredible. For Henry to be a finalist for Mr. Soccer was huge, him being Mr. Soccer was bigger and for him to be considered for this and ultimately chosen, I don’t know if I would’ve even dreamed that it would be an option. It’s incredible for him, our soccer program and our community as a whole.”

Levisen, a graduate of Albert Lea High School, starts every season by working on team building with Scott Hanna, a former state champion wrestler and Albert Lea grad who also served as captain of the Albert Lea Fire Department. Hanna and Levisen have always worked to make the Packers connect and respect each other before they get on the field.

“We want to make sure everyone has a voice on the team, whether you’re an eighth grader or a senior,” Levisen said. “(Hanna) sets it up in such a way that if somebody shows that they’re already a strong leader, he will limit their voice and emphasize some of those who haven’t been speaking as much and get them to lead.”

Levisen guided the Packers to a record of 13-0-1 overall record and a fourth straight Section 1A title this season. The Packers have advanced to state four times under Levisen, and they have taken third twice. His career record with the Packers is 180-80-28 overall in 16 years.

The Packers made it to their first state tournament in 2009, but the program has reached new heights in the past four years. As Austin’s population has become more diverse in recent years, the team has stayed successful with a mixture of players from all over the globe.

“It starts with consistency with expectations,” Levisen said. “We’ve had kids set team goals and one of the team goals is always that the players want to be something that the community can be proud of. That impacts who they are on and off the field. The kids get out on the field and they start to play a game that they love. It’s an outlet and it’s a chance to connect. When you get on the field, you’re going to trust your teammate and you’re not approaching it through some other lens. That welcoming aspect is there.”

Austin keeper Casey Berg has played with Tolbert and for Levisen for the last four years and he’s seen both of them do big things to keep the Packers on top.

“I was happy for them, they both deserve it. Henry’s had an amazing season and an amazing high school career. He’s deserved it and he’s worked hard to get there. Coach Levisen has projected the program up to where it is now and he deserved his award as well,” Berg said. “He’s a good coach. He pushes us all to do better and he sets up a good environment where he allows us to have fun, but we work hard to get better every day.”

Levisen was also named the Minnesota Coaches Association Section 1A coach of the year for the third time in 2020.

Tolbert has already been recognized as one of the best players in Minnesota and now he’s amongst the best in the country with this award.

Like Levisen, he was also surprised to receive national recognition.

“When I got the e-mail I was kind of surprised. I didn’t really know what it was and then I had to look it up. Then I saw I was one of the best players in the nation and I was like ‘how could that be?’,” Tolbert said. “It just means the Austin program is going to grow and we’re going to have people talking about us. Our name is going to be up there. The team will have an extra boost and it will work hard next year. It’s good news for my family, the team and the Austin soccer program. It’s not just for me.”

Tolbert is in the process of being recruited to play college soccer and he’s hoping he will find a team to play for next year.

Tolbert, who had 24 goals and 11 assists for the Section 1A champion Packers,  was one of 60 boys in the nation selected to the team and one of 22 forwards.

There were only two players from Minnesota chosen as Zachary Susee of Shakopee also made the cut.