Tigers advance to state tournament for first time in 52 years 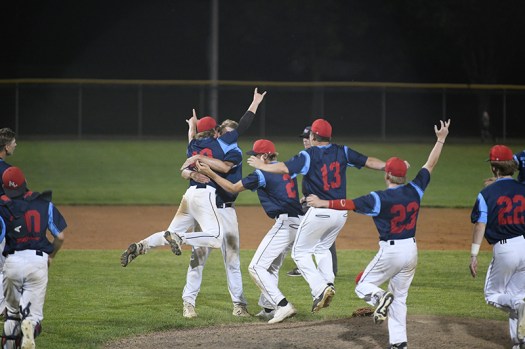 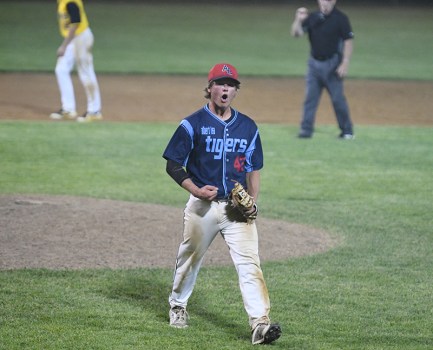 Senior Blake Ulve celebrates after getting a big out to end the seventh inning of game No. 2 Wednesday night. Tyler Julson/Albert Lea Tribune 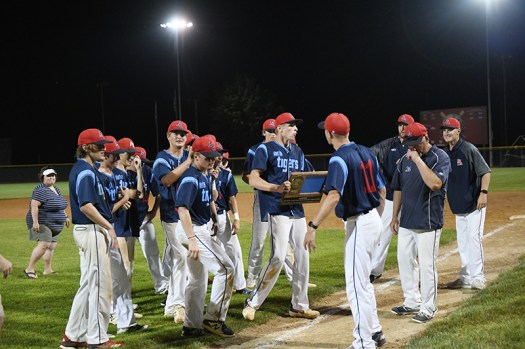 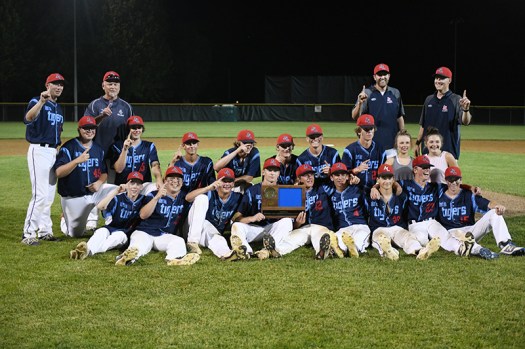 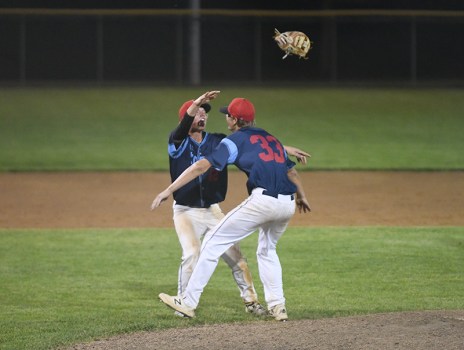 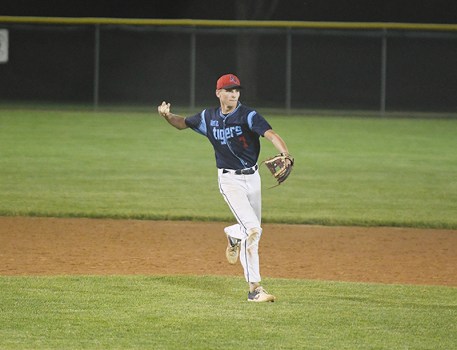 Jack Jellinger sets up to make the throw to first base for the final out Wednesday night. Tyler Julson/Albert Lea Tribune 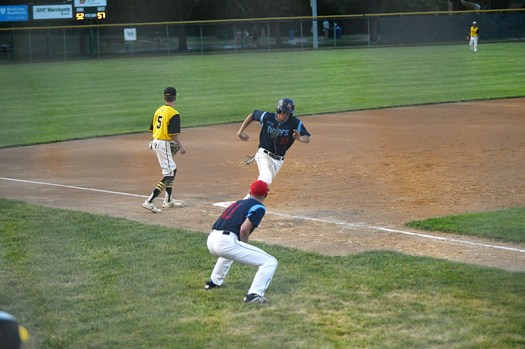 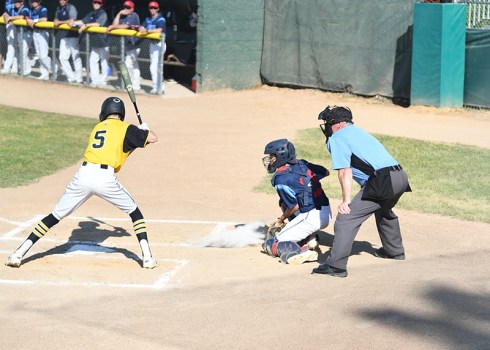 Senior Cody Yokiel makes a stop on a ball that was in the dirt during the first game Wednesday night. Tyler Julson/Albert Lea Tribune 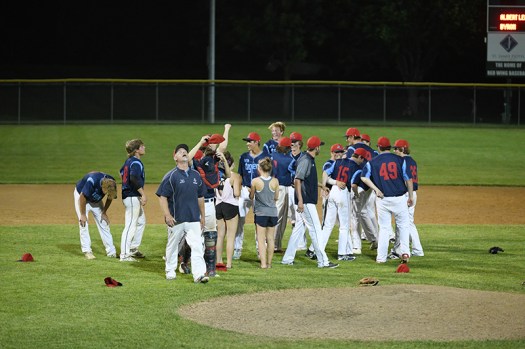 Albert Lea players, coaches and managers celebrate on the field after the 9-5 win over Byron that advanced them to the state tournament. Tyler Julson/Albert Lea Tribune 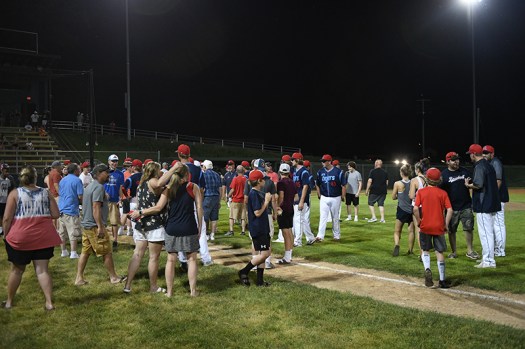 The Tigers celebrate with their fans after the game Wednesday night. Tyler Julson/Albert Lea Tribune

The Albert Lea baseball team entered Wednesday night with a shot at school history. A feat which hadn’t been accomplished by an Albert Lea team since 1969 — a trip to the Minnesota state tournament.

Standing between the Tigers and that goal was the Byron Bears. Having split their previous two games this season, the Tigers needed just one win in two games to secure their spot at state. After a tough 8-1 loss in the first game, the Tigers persevered, taking the Bears to extra innings in the second game, where Albert Lea dominated 9-5.

Albert Lea struggled to get their bats going in the first game of the night. Junior Henry Eggum and senior Jack Jellinger reached base with singles in the first inning, but they were the only hits for the Tigers until the top of the fifth inning.

The Bears tacked on one run in each the first and second innings, followed by stretching the lead to five in the third inning.

Junior Cam Davis got a hit in the fifth inning after back-to-back walks from seniors Blake Ulve and Cody Yokiel, but a double play in the next at-bat ended the inning with no runs coming in.

Byron added another run in the bottom of the sixth before Albert Lea scored its first and only run of the game in the top of the seventh. Senior Caden Jensen was walked to lead off the inning, and eventually came in to score after a throwing error.

Jellinger was the only Tiger with multiple hits in the opening game, totaling two.

The Tigers scored one run on four hits and committed four errors. The Bears scored eight runs on 10 hits and recorded three errors.

After a tough seven-run loss it would have been easy for the Tigers to lose focus and blunder through the second game, but that’s not what happened.

Yokiel talked about what it was like between games.

“Going into the second game, we were all thinking that we can’t end the season like this,” Yokiel said. “The coaches gave us a talk before the game and let us know that they didn’t want to go out like this.”

Ulve echoed his teammate’s statements about the attitude entering the second game.

“The big thing is that not a single guy in the dugout stopped believing in one another,” Ulve said. “The do or die factor came into play as none of us wanted this to be our last game.”

It didn’t take long for that do or die attitude to show up in the second game as the Tigers scored a run in the top of the first to take an early lead. The run came on a two-out RBI single by Eggum.

The Bears answered right back in the bottom of the inning, using a walk, single and double to score a run.

The Tigers went right back on the offensive in the second inning after Ulve started the inning with a single. Ulve was followed by a walk from senior Joey Flores and a single from junior Carter Miller. Davis then stepped up and hit an RBI single, giving the Tigers the lead once again.

Albert Lea held Byron scoreless in the second before going scoreless themselves in the top of the third. A walk followed by two singles in the bottom of the inning allowed the Bears to retie the game at 2-2.

The Tigers took a commanding lead in the fourth inning when an error allowed junior Brennan Bakken to get on base, and was followed by a double from Jellinger and a walk from Ball. With the bases loaded, Eggum crushed a ball to deep left field that just flew over the outfielders glove, allowing all three baserunners to score.

The score remained 5-5 when the end of regulation came around, forcing the teams into extra innings to determine the Section 1AAA champion.

The Tigers came out swinging, with Yokiel drilling a ball to the game in right-center field for a double. He talked about the hit that gave the Tigers a huge shot of momentum.

“It felt amazing and really changed the game for the guys,” Yokiel said.

After a pop fly put one out on the board, a single by Bakken followed by a single from Jellinger gave the Tigers a one-run lead. However, they weren’t done yet. Ball was hit by a pitch that loaded the bases, and Eggum then hit a grounder that resulted in him being thrown out at first, but also in a run coming in. If the momentum wasn’t already in the Tigers favor, it definitely was when Ulve stepped up to the plate and hit a monster double that scored another two runs, making it 9-5 before another pop fly ended the half inning.

The Bears put two runners aboard in the bottom of the inning, but it wouldn’t be enough to slow the rolling momentum of the state-bound Tigers.

Jellinger again had a multi-hit game, going 2-4 in the second game.

“I was able to see the ball really well tonight and knew I would need a big night at the plate in order for us to come ahead on top,” Jellinger said. “We did an amazing job keeping our heads up going into that second game.”

The Tigers entered the section playoffs on a six-game losing streak, which makes their run through the playoffs even more remarkable.

“The work ethic of this team has never waned,” said head coach Sean Gaston. “During that lull, the team was frustrated and definitely doubting itself. Ultimately, that crisis of confidence was probably the biggest issue during the losing streak, but I think that streak helped forge some bonds that got us to where we are today.”

Ulve said the message entering the postseason was to just play their game.

“Entering the playoffs, our mindset was if we play the game right, good things will happen, and that is exactly what the team thought was going to happen,” Ulve said.

The section title marks the first one since the 1969 season. A 52-year drought since the Tigers last made their state tournament appearance.

“I am incredibly proud and humbled to be a part of something as special as this,” Gaston said. “It has been incredible to see the town rally behind us. You could feel the excitement and the support from Albert Lea all the way over in Red Wing and I am so excited for the boys to be able to create memories they will never forget. The boys deserve all the praise for their ability to fight through a really good Byron team and the normal challenges of baseball while sticking together. They are awesome.

“I also want to say that I am super excited for Albert Lea athletics. I feel that this run is just a part of a general surge by all our sports.  I want to give a shout out to all the student athletes, coaches, Paul Durbahn, his staff and all of the district for their support not just for us, but for all our students who participate in a sport or activity.”

Jellinger also had thoughts on the team etching its name in the school history books.

The Tigers move onto the state tournament where they will take on an opponent that is yet to be determined. The first game will take place at the Mini Met in Jordan on Tuesday.