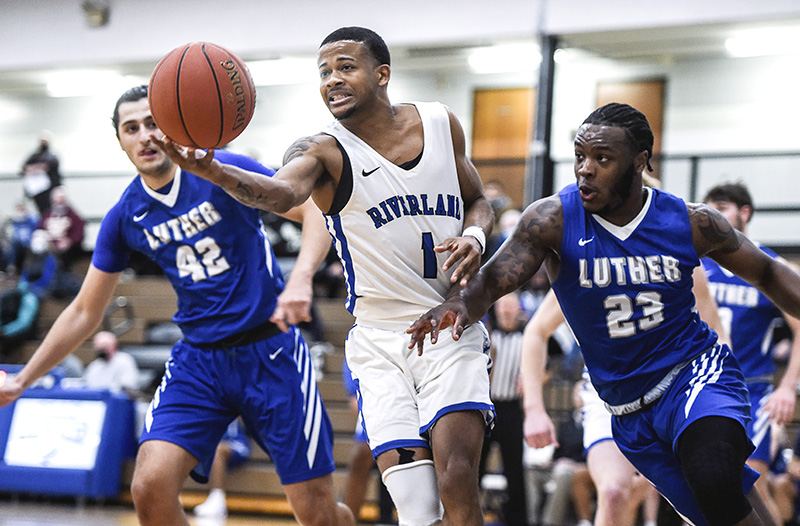 Riverland’s Junior Stone reaches out to control the ball during a game earlier this week against the Luther JV at Riverland. Eric Johnson/Albert Lea Tribune

When Junior Stone left Riverland Community College to go back home to Detroit, Michigan, a few years ago, he never thought he’d be a Blue Devil again.

But Stone is back on campus and he’s back in the lineup for the RCC men’s basketball team, a hard working, hustling rebounder who can also score. Stone, who played the 2016-17 season with RCC before moving back home, has served as a veteran leader for the No. 9-ranked Blue Devils, and he’s also become a role model for the younger players on the team.

RCC head coach Derek Hahn reached out to Stone before this season and he now sees the guard as a prospect to play at a four-year school.

“I wish we could’ve had him on a few years ago, but it’s good to have him back,” Hahn said. “He’s always been a pretty good player, but the biggest change is the academics. His maturity has changed drastically and I think he’s going to benefit down the line. He was in the working world, but now he’s going to see the benefits of being back in school. I’m excited for his future.”

“I was having a good season and then some things happened with my family and I went back home to take care of things,” Stone said. “I was playing in leagues back home, but the college game is way different. I really came back here to work on my degree and basketball has been for fun.“

Despite being in the working world for the past few years, he found himself wanting to get back to school and back to playing college basketball. There were a lot of things that he missed.

Now he’s looking to learn about web coding and land a job in the business world.

“It’s all coming together. I’m working hard and keeping my grades high,” Stone said. “School is something you don’t think you would miss, especially the homework and tests, but once you get away from it, you miss it. I missed the crowds at the games, meeting people from different states. I missed the whole atmosphere of college.”

RCC has an older roster than usual this year due to players receiving extra eligibility from the pandemic, but at age 23, Stone is a veteran amongst the group. He tries to tell the younger guys to keep going hard, no matter the result of the last play.

Stone’s attitude has rubbed off on many of his teammates in various ways. Lajarrion Spinks, a forward from Jonesboro, Louisiana, said that Stone’s path back to school is an inspiring one.

“It doesn’t matter how old you are, it’s never too late to start over,” Spinks said. “We all make mistakes. Everyone on the team sees Junior as a leader and he really helps the young guys out.”

Stone has learned patience from his time away from college, but he’s also learned urgency. The 6-foot, 2-inch Stone is averaging 10 points, 6 rebounds and 2 assists per game for RCC (2-0 overall) and he’s going to make every minute count this season.

“You have to play every game like it’s your last game that you’re going to play,” Stone said. “When I’m on the court, I feel like I have to bust my butt to do whatever I have to do.”

RCC will play at Mesabi Range at 7:30 p.m. Monday in Austin.