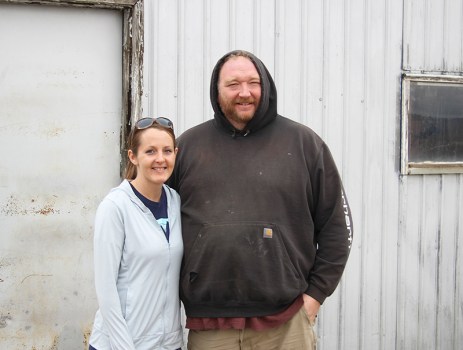 Allison Slegh and Chad Johnson have been together for over 13 years and are engaged. Alex Guerrero/Albert Lea Tribune 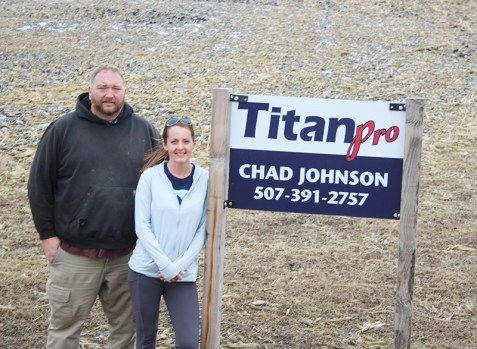 Johnson Family Farms is at 33599 County Road 96 in Ellendale and is around 3,700 acres. Alex Guerrero/Albert Lea Tribune

“It’s a third-generation farm my grandpa Jerry started — then my dad, and now me,” he said.

That meant growing up in a farming environment, and he estimated he started working when he was 14 years old.

“Did all the grunt work,” he said. “Pick rocks, weed fields, do hog chores, all the odds-and-ends.”

His experience was the opposite of his fiancee’s.

“I knew nothing about farming until I started dating Chad,” Allison Slegh said. “I have learned it’s a lot more work than I thought it was.”

Having been with Johnson for over 13 years, she admitted seeing the hours that farmers worked was an initial surprise.

“Especially in the fall,” she said. “Man, they go on two to three hours of sleep sometimes. It’s crazy.”

For Johnson, continuing to run a multi-generational farm was important, and he felt his work built on what his parents and grandparents began. He also wanted to continue because he felt farming mattered.

“For one, it feeds and fuels America,” he said. “And for number two, it’s the backbone of these small communities and counties.”

According to Johnson, farms in Freeborn County can provide 20 to 30% of employment to residents who — while not necessarily farming — are involved with a business that is.

“There’s not that many farmers left, so I’m trying to spread the message of what really goes on here,” he said. “I have people that just think what they hear happens on the farm.”

According to Johnson, less than half a percent of the population now farms.

“As the farms grow in size there’s just less people farming,” he said.

The farm, which Chad estimated to be 3,700 acres and grows corn, soybeans  and canning crops, also has four finished barns to store turkeys.

This was his first time being nominated for the Farm Family of the Year Award.

“I was a little surprised just cause there are a lot of family farms in Freeborn County probably just as deserving,” he said. “It also makes you feel good for the advocacy work that we try to do to get recognized.”

He and Slegh were also appreciative of the two full-time hands on the farm, Nathan Larson and Tony Seykora.

“[They] cover me well so I have the opportunities to be on the boards and active in Freeborn County,” he said. “They cover a lot of the real work when I’m gone.”

And winning, Johnson admitted, helped motivate him to continue promoting agriculture within the county.

Slegh admitted she didn’t fully know what Farm Family of the Year meant.

He also wants to leave the farm to his family when he retires.