Joann Manemann, 92, passed away on November 30, 2022, at Seasons Hospice in Rochester. Born Lujean Johanna Loeffelholz on August 8, 1930, Joann was the middle of 11 surviving children of Joseph and Catherine (Leiting) Loeffelholz. She was born and raised on her parents’ farm near Mount Carmel, Iowa, graduating from the parish school in Mount Carmel and from St. Angela’s Academy in nearby Carroll in 1948. While working as a dental hygienist in Carroll, Joann met her husband F. Gerald Manemann. They were married May 16, 1950, in Mount Carmel. 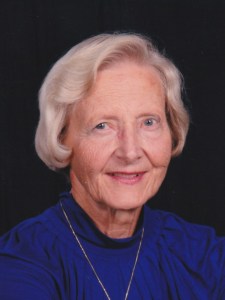 As young marrieds, Joann and Gerry made their home in Carroll and in California while Gerry served in the U.S. Marine Corps. In 1966, they left Carroll for South Carolina with six young children, where Gerry managed a poultry production plant for Ocoma Foods. The Manemanns moved to Minnesota in 1968. They lived first in Albert Lea, where two additional children were born, and then in St. Charles after 1974. Joann and Gerry were married more than 58 years when Gerry died in 2009. In 2017, Joann moved to Madonna Towers in Rochester.

From childhood, Joann was a voracious reader who greatly valued books and education, something she shared with her children and as a volunteer for the Great Books program in St. Charles schools. She was also the consummate homemaker – an accomplished cook and baker, a talented seamstress and needleworker, and an avid gardener – and even handy with a paintbrush and toolbox. Joann also often worked outside the home, not only as a dental hygienist but also later nights on a Land O’Lakes production line and as a night nurse aide for 17 years at Whitewater Health Care Center in St. Charles, retiring in 1997.

There will be visitation on Tuesday, December 6 from 5-7 pm at St. Charles Borromeo Catholic Church in St. Charles and again on Wednesday, December 7 from 10-11 am at the church, immediately preceding the funeral Mass at 11 am. The Mass will also be streamed on the church website (https://www.redeemersaints.org/). Burial will be in Calvary Cemetery, St. Charles. In lieu of flowers, the family requests memorials to Seasons Hospice or the Alzheimer’s Association. Cards may be mailed to 12954 622nd Street, Wabasha, MN 55945.

Schad & Zabel Funeral Home in Plainview is assisting the family with arrangements.