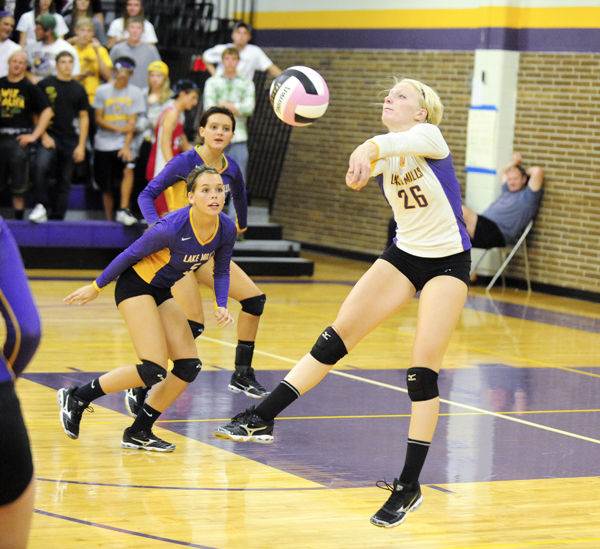 According to Bulldogs head coach Jim Boehmer, the team hasn’t lost a regular season match since a tournament in Forest City two years ago.

The girls will have a chance to defend their streak during that same tournament Saturday.

“We’re going to see a lot of Class AAAA schools this weekend,” Boehmer said. “That’s good. If we can get through that, we have a lot of opportunities.”

Calling themselves a family, not a team, is what has made this team the powerhouse it has become.

“We don’t have a ton of superstars,” Boehmer said. “I’ve got girls that are becoming superstars, but they just mesh well.”

In the first game against West Hancock, the Bulldogs more than tripled the Eagles’ points by finishing with a 25-7 score.

West Hancock picked up a few more points in the other two games, but not enough to shut down the Bulldogs. Lake Mills won the second game 25-11 and the third 25-10.

“Tonight was good,” Boehmer said. “We didn’t play real well on Tuesday and I told the girls, ‘No matter who we’re playing, we’ve got to get better.’ Tonight, we got better. We passed a lot, we served aggressive and all of our hitters were making themselves an option to hit.”

Boehmer said his girls put themselves through a lot because they are competitive and want to win.

He said the team is working on its transition, especially the hitters, so that everybody can be an option.

“They were good about that tonight,” Boehmer said. “With our setters Carlie, Brooke and Randi we just have kids that can put balls in our hitter’s hands as long as our hitters are transitioning.”

After Thursday’s games, the Bulldogs are 16-0 on the season.

This weekend will mark the halfway point of the season and Boehmer hopes to “keep the ol’ train rolling as long as we can.”

The Bulldogs have already seen some of the teams that will be at the tournament, but there will be some unfamiliar faces, too.

“Our goal is to never lose to someone that we’ve already beat,” Boehmer said. “And we want to rise to beat some of those new teams.”

Without doubt, friends, family and the student body will be supporting the Bulldogs.

“Our student body lives for this,” Boehmer said. “A lot of our school’s identity is that volleyball team.”

The Forest City tournament is set to begin at 9 a.m.

Following the tournament, the Bulldogs’ next game will be against Garner-Hayfield-Ventura on Tuesday, which Boehmer expects to be another tough one.