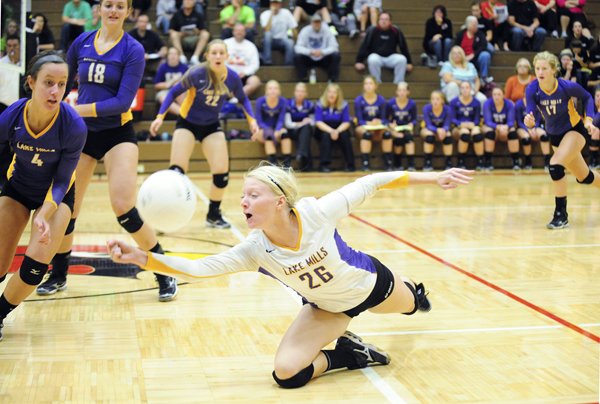 Hallie Erdahl dives to the floor Monday during the final match of the NIC tournament. The Bulldogs beat Osage 3-0. --Brandi Hagen/Albert Lea Tribune

GARNER — The Lake Mills volleyball team swept the North Iowa Conference tournament in Garner Monday night after beating Forest City and Osage 3-0. The Bulldogs had already claimed the conference championship with a record of 7-0 and an overall record of 34-0, but were in it to win it Monday for their pride.

Osage was the favorite at the start of the season because they had four all-conference players returning. The Bulldogs only had two.

“I think everybody had figured they were going to be conference champs and we snuck in there,” Lake Mills head coach Jim Boehmer said. “The trophy is already ours, but we didn’t want to lose this tournament. We’ve been in the finals for 10 years straight and won it eight of those.”

With the claim of their ninth NIC tournament title, the Bulldogs also added notches to their winning streak. They have won 96 straight regular season matches over the last two years and have potential to break the 100 mark next week.

“We’re just fortunate,” Boehmer said. “There’s 45 of those we could lose against quality opponents.”

The 100 win mark is one of the Bulldogs’ many little goals that they set throughout the season.

Boehmer said the wins on Monday night came from a team effort and from girls stepping up.

“If everybody outperforms the way they did last time on the court, the team is automatically going to get better,” Boehmer said.

In the first set against Forest City for the semi-final round, Lake Mills got up as much as a 9-point lead. They won the set 25-13. In the second set, Forest City got a six-point lead, but the Bulldogs battled back to tie the set at 24. Lake Mills scored the 25th point first and Forest City answered. The Bulldogs held their ground and finished the set 27-25.

“The second set is always our nemesis,” Boehmer said.

With the other semi-final volleyball match going on right next to them, Boehmer said the girls lost their focus.

“They had a lot of heart coming back and being able to win 27-25,” Boehmer said. “That was huge. When you find yourself down by four or five and the other team is at 20, usually you’re out of luck.”

The Bulldogs came back aggressively and with more focus in the third set, only falling short on tight balls. They won the set 25-14.

“When you see the same team over and over and over again, it gets dangerous,” Boehmer said. “We’ve played Forest City a lot during the years, sometimes as many as four times a year. It’s tough to keep showing up because they want to beat you so bad.”

Going in to the final round against Osage (6-1), Boehmer felt it was going to be a “barn burner” and the biggest test of the year, because of an old rivalry.

“Osage is fired up,” Boehmer said. “They want this.”

“I think we played well in this whole tournament,” Boehmer said. “We didn’t lose a set. We always try to measure ourselves against ourselves. The only way to do that is to match up against common opponents.”

Depending on the moment of the match, Boehmer said different girls led the team.

“Individually, when you add us up, I don’t know what you get, but when you put us all on the floor together, that number is bigger than the sum of our parts, without a doubt,” Boehmer said.

The Bulldogs will play six more matches before the regional tournament begins.

For now, they’re taking their first weekend off since Aug. 2.