NORTHWOOD — The Lake Mills boys’ basketball team faced off against Northwood-Kensett Thursday night with Lake Mills pulling out the win by a score of 68-58. 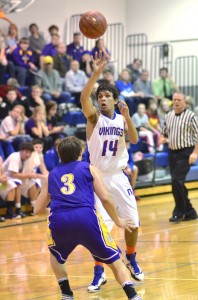 “That was a good, hard fought win for our guys,” Lake Mills coach Kyle Menke said.

The first period was all Bulldogs as they outscored the Vikings 12-3. The Bulldogs kept the Vikings from making any field goals, leaving them with three free throws made.

The Vikings came alive in the second quarter outscoring the Bulldogs 23-15 and bringing the half time score to a one-point 27-26 lead by Lake Mills.

Brady Cotter nailed two 3-pointers in the quarter and Justin Read added one as well.

“I’m proud of the kids, they battled back,” Cotter said.

In the third quarter, the Vikings took the lead early on. Mike Burrows played aggressive defense and forced two jump balls within a matter of seconds on the clock, giving the team four points.

That gave them a 36-34 lead. The Bulldogs responded with six unanswered points to retake the lead, only to have the Vikings tie it back up at 40-40. The Bulldogs finished the quarter with a couple more free throws and a big 3-pointer by Hunter Kingland to give them a 45-40 lead going into the fourth and final quarter. 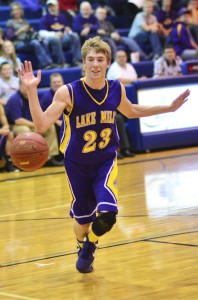 Taylor Throne lets the ball go out of bounds Thursday night against Northwood-Kensett.

The fourth quarter was a battle between the two teams with the Vikings getting within a field goal of tying or leading a couple times, but the Bulldogs were too strong in the closing minutes and wound up with a 68-58 win over the Vikings.

“We were right there until two minutes to go in the game,” Cotter said. “We turned it over a couple of critical times and they made their free throws.”

The Bulldogs made 26 out of 35 attempts from the free throw line, while the Vikings were just 16 of 26.

“I think the thing that I am most pleased with is that we overcame some foul trouble with our best players,” Menke said. “We had some kids step up and those kids that were in foul trouble took care of business down the stretch for us.”

“Real good win for our guys. I thought Cody Thompson had an excellent game. Nathan Banwart hit some shots for us in the first half. Down the stretch, Kingland and Peters took over the game the way good players should,” Menke said.

Northwood-Kensett’s leading scorer was Cotter with 15 points. He was followed by Brent Hagen with 11 points, Josh Einertson with 10, Justin Read with nine and Mike Burrow scored eight.

Both teams are back in action again Dec. 4. Lake Mills (2-0) is at North Iowa and Northwood-Kensett (0-2) is hosting St. Ansgar.