The Rock takes on a new look downtown 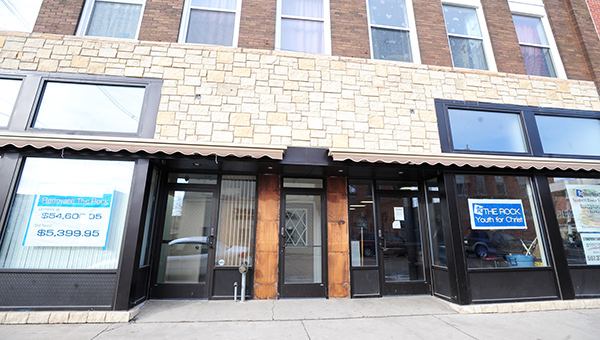 A renovation project nearly two years in the making is beginning to take shape in downtown Albert Lea.

Youth for Christ’s The Rock, at 116 W. Clark St., is not only seeing upgrades to its exterior — which are perhaps the most visible — but also improvements on the interior.

Her husband, Greg Gudal, the executive director of South Central Minnesota’s Youth for Christ, said about two years ago he and other leaders within the organization began talking about the need to renovate the building.

The building’s sign was in terrible shape and water was getting in through the front walls, he said.

“One thing has led to another,” Robin said. “We just needed to do something.”

The group decided to move forward with a fundraising campaign to collect $60,000, reaching out to the community through phone calls and newsletters. 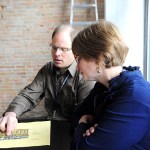 Greg Gudal, left, and Robin Gudal, discuss the renovations that the Youth for Christ building, The Rock, has had done. –Brandi Hagen/Albert Lea Tribune 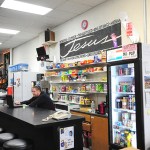 The food area in The Rock has yet to be renovated. The plan is to install corrugated metal along the wall. 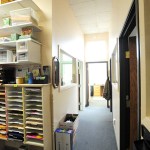 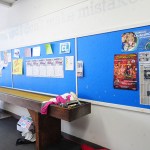 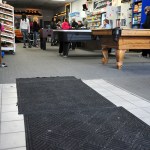 The floor in The Rock is worn and will be replaced as part of the renovation. 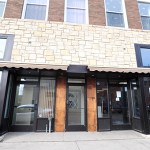 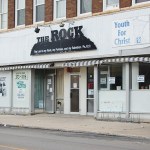 Youth for Christ’s The Rock is pictured before renovations began on the building. –Submitted 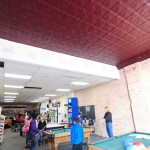 The ceiling in the front part of The Rock was raised to reveal the original ceiling. It then was painted red. The worn pool tables will also be updated with new felt.

The goal was to make the front part of the building more energy-efficient and more resistant to the weather. It should also help reduce utility bills.

Greg said initially he and others met with Minneapolis architect Pat Waddick to draw up some initial possibilities for the exterior and at first considered working through a city grant for some funding.

In the end, though, they chose to do the work on their own, working with volunteers and hiring contractors when necessary.

On the inside, volunteers and contractors raised the ceiling in the front part of the building to reveal intricate textured ceilings, installed new sheetrock on the front wall and pulled off sheetrock on another wall to leave exposed brick. They have also renovated the offices, upgraded heating and rerun some vents.

Robin said they still plan to install corrugated metal along the wall in the food area, along with new carpet, interior lighting and shades for the upper windows. They plan to purchase new high-top tables, re-cover the pool tables and paint some of the walls.

“It’s a cozier atmosphere,” she said.

They would like to be finished with the work by April 1.

History of Youth For Christ

The faith-based organization was in two other locations on Clark Street before moving into its building known as The Rock.

The main part of the building houses a drop-in center for youth, giving kids, typically second grade and older, a place to come during the afternoons to meet in a supervised, safe environment with their peers. Offices are in the other half.

They have a bigger mission than offering kids a place to meet, Greg said. The drop-in center is a tool to obtain that mission.

“It’s good to have a place for kids to go, but if we really want to help them, we need to invest in them,” Greg said.

He said the organization is focused on strong relationships, moral choices and spirituality, academics, safety and health, work ethic and service to the community

The organization gives food to the youth each day after school, and meals are served two nights a week. Additional meetings are held for the youth on some evenings.

“We want to reach kids, to see lives changed and to develop leaders in the end,” he said.