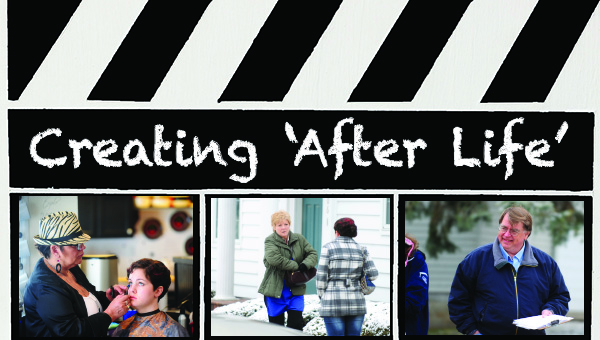 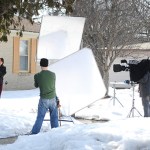 A film crew shoots a scene in Lake Mills on March 27 at the home of Donna Lair. The crew shot scenes several days in Lake Mills for the film “After Life.” 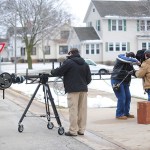 A film crew sets up outside of a Lake Mills home to shoot a scene of “After Life,” a film written by Scott Thompson of My Town Pictures. — Brandi Hagen/Albert Lea Tribune 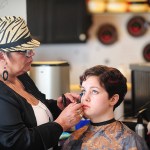 Lake Mills resident Gretchen Skellenger has her makeup done by Franci Sciorrotta at the Razzy Retreat in Lake Mills for the filming of “After Life.” 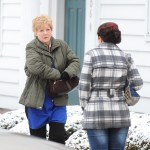 Ellen Dolan, a professional actress who played the role of Margo on “As the World Turns”, films a scene in Scott Thompson’s “After Life” in Lake Mills on April 12. 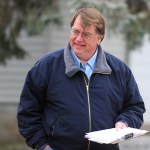 Scott Thompson, My Town Pictures producer, watches as a crew sets up equipment outside a home in Lake Mills on April 12 to film a scene of “After Life.”

LAKE MILLS — On March 22 the Lake Mills community started to experience the afterlife. The film, “After Life,” that is.

Scott Thompson, a writer and producer from Mondovi, Wis., and his crew, My Town Pictures, started shooting its fourth film in Lake Mills in March and finished up last week. Scenes for the film were shot at several homes, businesses and historic places in Lake Mills, Buffalo Center, Iowa, and Forest City, Iowa.

The film, “After Life,” is about a television psychic who claims to be able to speak to the dead. The psychic teaches his college-aged daughter, Mara, how to do what he does. Mara uses her skills on a man whose wife has been missing and presumed dead for more than 20 years, but is shocked when she accidentally runs into the man’s dead wife who is alive and well and wanting to stay hidden. The film is a dramatic comedy about many people’s need to find a better life than the one they have, and how hard it is.

In the film, Thompson cast local talent in lead roles and as extras, as well as brought in nationally-known stars of film and TV including Daniel Roebuck, Gary Kroeger, Liza Weil, Ellen Dolan, Ashlee Hewitt and Samantha Tuffarelli.

Dolan, an actress who played Margo on “As the World Turns” has been in Thompson’s films before and plays the role of the not-so-dead wife in “After Life.”

The Decorah, Iowa, native said she keeps coming back because of Thompson’s ability to write “beautiful stories and be professional yet creative and fun.”

“It’s neat to be able to come full circle,” Dolan said about being back in Iowa. “That hasn’t escaped me.”

Thompson said working with all of the stars and adding them to the regular cast members he uses in his films worked out well.

“It’s like creating a family, and to bring in these national folks is not changing the family, it’s adding to the family,” Thompson said.

Leading the cast as Mara was hometown talent, Gretchen Skellenger.

Twenty-year-old Skellenger is the daughter of Allan and Willie Skellenger. She has been acting in school plays since she was 5 or 6.

“It’s always been a passion of mine,” Skellenger said.

She is currently a student at Wartburg college majoring in theater and minoring in film. The opportunity to work with Thompson for the third time was not only fun, but was also beneficial to her studies.

“In my classes I learn more about theory and analysis of films, but with Scott I get to be hands-on and make films,” Skellenger said.

And, she was able to learn from the professional actors and actresses.

“It was excellent working with them and getting to know them not only on a professional, but a personal level, too,” Skellenger said. “They had a lot to teach me because they’ve had a lot of experience working in the field.”

Some of the other Iowa actors who played a role in “After Life” were Matt Eastvold of Forest City, Catherine Penning of Eldora, Iowa, and Jim Brockhohn of Forest City.

Thompson estimated at least 50 local extras were used between the three towns the filming took place in.

Once the film is ready to be shown, most likely in several months, The Mills theater in Lake Mills will be one place people can catch it.

The film will also be shown at independent film festivals around the world.

More about My Town Pictures

Thompson began writing and producing films in 1999 and has since written more than 50 community movies and feature films.

“I like to tell stories about real people and real places,” Thompson said. “We’re not here to make Jersey Shore.”

Thompson was drawn to shooting in the Lake Mills because his wife’s family is from area. His other three productions that were shot in Lake Mills were “Homeland,” a family film about reluctantly returning to one’s roots, “Funeral Ladies,” a comedy about three women who attend all the funerals in town so they can gossip and have lunch and “Waiting for Carl,” a holiday-themed dramatic comedy.

To see more films My Town Pictures has made, visit www.mytownpictures.com.