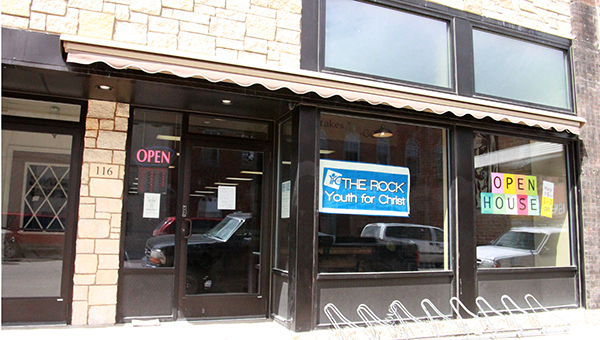 The exterior of Youth for Christ’s The Rock has gone through major renovations, including new windows, stone decor and awnings. — Brandi Hagen/Albert Lea Tribune

Youth For Christ to celebrate upgrades with open house

Today the Youth for Christ’s The Rock, 116 W. Clark St., will host an open house from 1 to 3 p.m. to show off its newly renovated building after nearly two years of planning and work.

The kids who frequent the building weren’t so sure about the changes initially, but Greg Gudal, the executive director of South Central Minnesota’s Youth for Christ, said they are starting to warm up to it.

Part of the problem for the kids was that some of the quotes and paintings that were on the wall before were painted over.

“It’s encouraging to know the kids noticed they were there,” said Robin Gudal, the director of operations.

Since then, those paintings and sayings have been repainted on the walls.

In addition to the old art on the walls, also displayed is pieces by kids who have worked with Sarah Nelson, the middle school ministry director, through an art mentorship.

“The kids are doing the artwork so then they have more buy-in,” Rick Miller, the area ministry director said.

The renovation of The Rock, which originally started with a price tag of $50,000, increased over time to $70,000 excluding a new sign for the exterior of the building and new bicycle racks.

“It doesn’t get cheaper to do it five years down the road,” Miller said.

Robin said once the renovation process started they realized what other projects could be done to update the building.

And because The Rock had to close for two weeks during the project, it was decided to get everything done at the same time instead of doing a few projects at a time and causing more disruptions.

Robin described the new look of the building as having a coffee shop sort of feel with it’s industrial, artsy and kid-friendly decor.

The changes that have taken place include adding wainscoting, fresh paint on almost every wall, a new office space, carpet, felt on the pool tables, closet, awnings and windows and more ceiling fans and high-top seating.

Besides the new windows and awnings, the exterior of the building also got a facelift with new stonework. Some of the larger projects on the interior were raising the ceiling to expose the intricate textured ceiling, removing sheetrock to expose brick, replacing worn sheetrock and adding corrugated metal to two of the walls.

Originally the conversation about a renovation began because the building was leaking and was not very energy efficient.

“We had to get more and more pails to collect the water that was dripping inside the building and the sign was totally shot,” Greg said. “Everything was just wore out.”

In the early stages of the renovation, a city grant was considered for funding. In the end, though, The Rock raised the money to do the project without the grant.

Robin said funds were raised through newsletters and communication with donors and the community.

“It’s amazing,” Robin said. “A lot of times people don’t think their $5 or $10 donations are going to make a big impact, but if you have a hundred people that do that it makes a huge impact. It’s $5 donations up to thousands of dollar donations. You just keep plugging away.”

The work on the renovation came from hired contractors, but also volunteers.

Robin said Sentence to Serve was a huge help with the demolition process and some of the high school kids who use the space came in to help clean and move things around.

“It was grunt work,” Robin said. “It really was. It was not glorious, but they were helping and that’s part of our scholarship program.”

Robin said because the building is a youth drop-in center a principle goes along with all the work that has happened.

“You take care of what you have,” Robin said. “We are teaching a life skill that it’s OK to work hard and get something nice and then take care of it.”

The Gudals encourage the public to stop by today and see the changes that have happened since November.

“We just want people to have the opportunity to come in and see the whole place,” Robin said. “It’s a way to celebrate.”

“Sometimes it seems like adults aren’t sure if they should come in,” Greg added. “So we’re giving a special invitation to come in.”

Tours will be given during today’s open house including the basement to show off the art room that the kids use. Coffee and cake will be served. 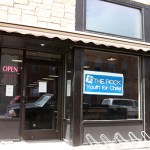 The exterior of Youth for Christ’s The Rock has gone through major renovations, including new windows, stone decor and awnings. — Brandi Hagen/Albert Lea Tribune 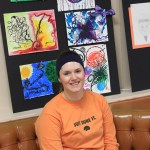 Sarah Nelson, the middle school ministry director, sits by some of the student art work that will be on display during today’s open house. Nelson is working with students to create art that will hang on the walls at The Rock. — Brandi Hagen/Albert Lea Tribune 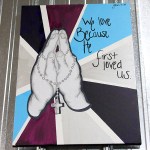 A piece of student art work hangs on the new corrugated metal in The Rock. — Brandi Hagen/Albert Lea Tribune 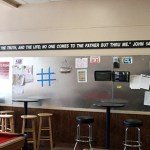 The new bulletin board at The Rock is made of metal instead of cork like the last one. Another change was to the pool tables which got new felt during the renovation. — Brandi Hagen/Albert Lea Tribune 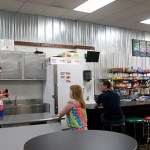 The food wall at The Rock was updated with corrugated metal for a cleaner, more industrial look. — Brandi Hagen/Albert Lea Tribune 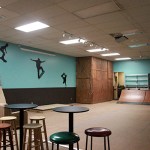 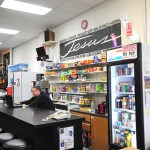 The food area in The Rock,l has new corrugated metal along the wall. — Brandi Hagen/Albert Lea Tribune 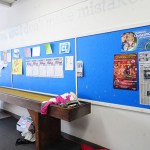 The former bulletin board at The Rock was made of cork. — Brandi Hagen/Albert Lea Tribune 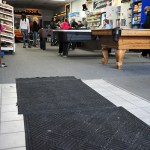 The Rock in the middle of some organizers this winter. — Brandi Hagen/Albert Lea Tribune 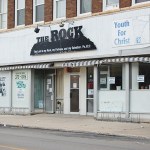 Youth for Christ’s The Rock is pictured before renovations began on the building. — Submitted