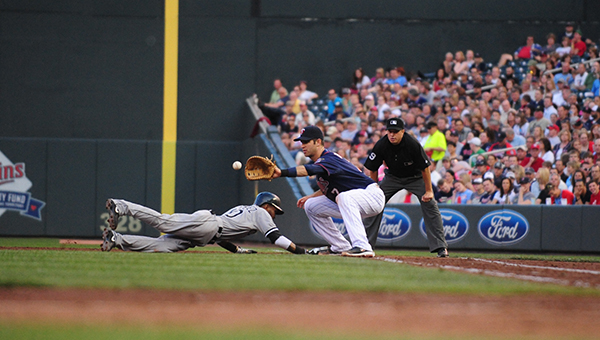 Joe Mauer sports his first-base mitt Tuesday against the Chicago White Sox. He homered in a game that the Twins nearly could have lost. –Micah Bader/Albert Lea Tribune

MINNEAPOLIS — Minnesota’s five-time All-Star Joe Mauer gets the most ink for being a hometown star, and deservedly so. In the Twins’ 7-5 win Tuesday over the White Sox, he played his usual big role. Mauer hit a two-run shot in the first inning and played mistake-free at first base.

However, Mauer, who went to high school in St. Paul, isn’t the only home-grown player on Minnesota’s roster. The other two native Minnesotans are on the pitching rotation. Glen Perkins — who pitched for one flawless inning with no hits or walks and two strikeouts on Tuesday in relief — is from St. Paul.

Caleb Thielbar — who has appeared in 10 games this season and has a locker next to Mauer — is from Randolph.

During his high school days, Thielbar, a 2005 graduate of Randolph High School, faced teams from the Gopher Conference including New Richland-Hartland-Ellendale-Geneva, United South Central and Alden-Conger before the Knights moved to the Valley Conference his senior year.

“We were a small town, but we always had a pretty good team,” Thielbar said. 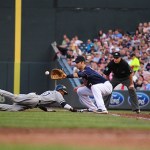 Joe Mauer sports his first-base mitt Tuesday against the Chicago White Sox. He homered in a game that the Twins nearly could have lost. –Micah Bader/Albert Lea Tribune 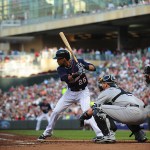 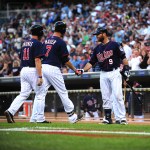 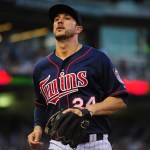 Trevor Plouffe jogs from the infield to the Twins’ dugout during Minnesota’s 7-5 win over the Chicago White Sox Tuesday. 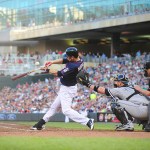 Justin Morneau connects with a pitch Tuesday against the Chicago White Sox. Morneau had one hit and scored one run. Minnesota won 7-5. 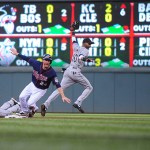 Trevor Plouffe declares that he is safe at second base against Chicago White Sox. The umpire agreed with Plouffe. Plouffe had one hit and 2 RBIs. Minnesota won 7-5. 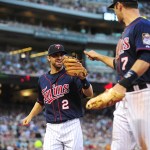 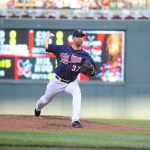 Thielbar credited his father and his coaches with providing inspiration to improve his game.

“My dad always pushed me to try to crush the competition rather than just get by,” he said. “Growing up, I’ve always had good coaches.”

After excelling on the diamond for Randolph, Thielbar took his talents to South Dakota State where he became the Jackrabbits’ all-time leader in starts (44) and innings pitched (274). He also ranked second in career strikeouts (196).

Harvey Kuenn Jr., a scout for the Milwaukee Brewers, took note of Thielbar’s skills, and the Brewers selected him in the 18th round of the 2009 MLB Draft. After playing for two seasons in Milwaukee’s farm system, he came back to Minnesota and signed with the St. Paul Saints in a separate professional league.

In 2011, Thielbar was signed by the Twins as a minor league free agent, and he played at Fort Meyers, New Britain and Rochester on his way up the ladder.

“It’s nice to get back into a major league organization,” Thielbar said. “I’m grateful the Twins gave me the opportunity.

“The dream was just to play in the big leagues to be honest. I didn’t really matter for which team. But it has made it a little more special since it’s with the Twins.”

After a rough patch of 10 straight losses in May, the Twins’ pitching rotation is getting back to form, Thielbar said.

“We’ve been throwing the ball well as a staff lately,” he said. “Starters are throwing pretty deep into games right now, and bullpen guys have been coming in and shutting people down.

“We’ve just got to keep that going and we’ll be fine.”

Since the 10-game losing streak, the Twins have won 13 of 21 games. In the American League Central standings, Minnesota is in fourth place at 31-36 overall. However, the Twins are only 2 1/2 games behind second-place Cleveland and seven games behind division-leading Detroit.