Gallery: A chance to meet Marion 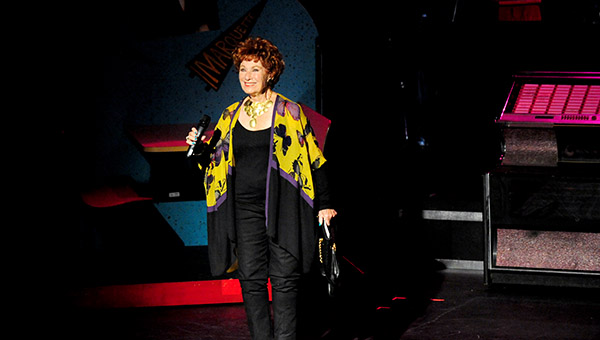 Albert Leans flocked to the Marion Ross Performing Arts Center on Wednesday to get their chance to meet the theater’s namesake.

Ross was driven up to the downtown theater in a classic creme-colored Packard before the debut of Albert Lea Community Theatre’s new show, “Happy Days, a New Musical.”

The musical is a new story, with all new music, that has all the original characters from the TV show. Ross said she was glad she wasn’t performing so that she can watch it from the audience.

“Let them carry the show — they are so ready,” Ross said.

Ross arrived in Albert Lea on Tuesday and has a busy schedule of events planned during her one-week stay. She will be present before and after shows of “Happy Days, a New Musical” each night this week and at the matinee on Sunday. She said she was thankful and emotional that the theater wanted to put on this particular musical.

“It’s quite unbelievable; it makes me want to cry,” Ross said.

Two women were among the first to get their photo taken with Ross. Pat Kalis, of Albert Lea, and Robin Grunhovd, of Lake Mills, were excited to meet the star. They both remember her starring role as Mrs. Cunningham in the late ’70s and early ’80s TV show “Happy Days,” which was set in the 1950s.

“We followed ‘Happy Days’ all our lives,” Kalis said. “This is so fun to have this.”

Theater Co-President Rosalie Truax said Ross is thrilled to be in Albert Lea and see the show. Many people lined up before the show to meet Ross and get their photo taken with her. Some had old photos and stories to share with Ross, and others were just happy to say hello.

“It is very exciting,” Truax said.

There was one more special surprise before the show started on Wednesday. After the audience had taken their seats and the house lights went down people could hear a voice from off stage asking Joanie and Richie to do chores. The voice also asked why the landscape looked so unfamiliar. Then Ross strode in from stage right to greet the audience.

“This is such a thrill for me,” Ross said after much applause. “I’ve seen some of this, and it’s fantastic.”

Ross said Albert Lea is a “wonderful little city,” and told audience members they were going to have a really good time at the show. She said she had no hand in the show, and that the crew had done a great job. Ross had just one more sentiment before she exited.

“And now I leave it all to the children,” Ross said. 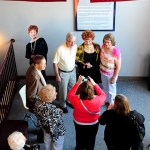 Marion Ross took photos and signed autographs with fans before and after the opening night of “Happy Days, A New Musical” at the Marion Ross Performing Arts Center in Albert Lea on Wednesday. 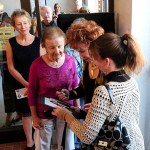 A woman has Marion Ross autograph a photo the two took together when she was a young girl. 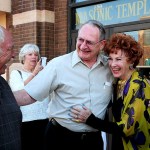 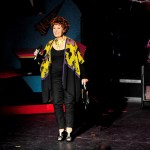 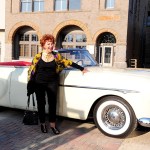 Marion Ross arrives at the Marion Ross Performing Arts Center in a classic car Wednesday to meet and greet fans before the opening performance of “Happy Days, A New Musical.”