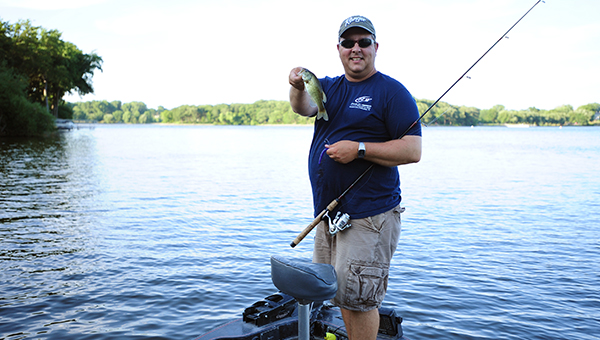 When Albert Lean Jason Howland headed to Nickajack Lake in southern Tennessee for the Super Bowl of bass fishing events, he had a chance at the $50,000 first-place prize.

He returned from the Bass Fishing League All-American tournament with 11th place, $1,500 and a positive experience.

“They treated all the anglers like royalty, and it’s something I’ll never forget,” Howland said.

Howland and the 99 other anglers — 50 professionals and 50 amateurs — were set up with a boat, free food and a stay at the Mariott Hotel. Even his gas milage to the Volunteer State was on the tournament’s dime, he said.

The tournament ran from June 27 to 29 with cuts after each day. Howland competed in the amateur division. After finding success on day one, he held fifth place.

“You fish for a limit of bass, and the most weight of that five-fish limit,” Howland said.

He missed qualifying for the final day by 2 ounces on day two. After hauling in three bass, Howland would’ve lived to fish on day three, had he not hit a few snags.

“It was a struggle the second day,” Howland said. “I had one that died on me, which was a 4-ounce penalty, and — it’s the typical fisherman’s story — I lost a 5-pounder 10 feet from the boat.

“The thing jumped out of the water and spit my lure out. I dropped to my knees and almost started crying.”

At the All-American, Howland was provided with a boat, but in the previous qualifying tournaments he used his 1988 Champion, which is on its second motor.

Howland has been competing in bass fishing tournaments since 1998.

Howland chooses to compete as an amateur because of the time commitment that professionals put in.

“If a tournament is on Saturday, usually the pros will pre-fish for at least three days,” he said. “I can show up on Friday, otherwise it’s tough to have a professional career.”

Howland works in public relations in Mankato at Mayo Clinic Health System. Before that, he was the sports director and a morning news anchor at KAAL.

Howland hopes to qualify for the All-American next year as well. He said Minnesota has several lakes that are good for bass fishing: Clear Lake in Waseca (catch and release only), Lake Tetonka in Waterville and Cedar Lake by Faribault.

Albert Lea also has a lure to bass anglers.

Today, Howland will compete in the Four Seasons monthly tournament on Fountain Lake, which starts at 5:30 a.m. with a final weigh-in at 2 p.m. today.

“Fountain Lake is kind of a little secret,” Howland said. “I fish here at least once a week. A lot of people don’t realize what kind of bass fishing there is in this lake.” 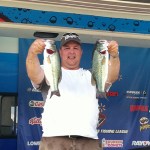 Jason Howland holds up a pair of bass he caught at the Bass Fishing League All-American Tournament. — Submitted 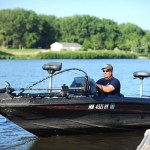 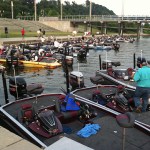 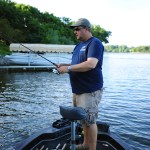 Jason Howland of Albert Lea stands near the bow of his boat with his fishing line in the water Friday in Edgewater Bay on Fountain Lake. — Micah Bader/Albert Lea Tribune