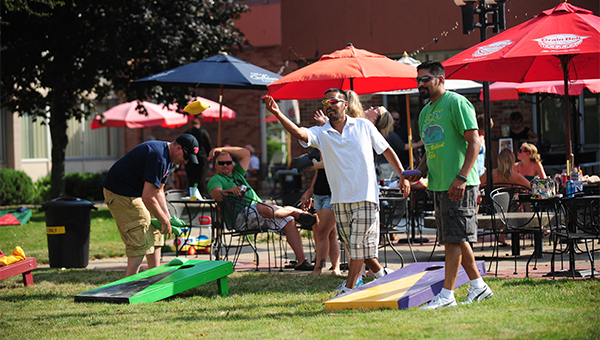 Lennie Aguilera throws a beanbag, while Pedro Olvera waits for his turn during a tournament Sunday in the Big Island Grill and Bar courtyard. — Micah Bader/Albert Lea Tribune

Beanbag enthusiasts have a new destination to play their sport on Sunday afternoons.

For the first time, Big Island Grille & Bar is hosting a beanbag tournament in its remodeled courtyard every Sunday until the championship on Aug. 25, front office manager Aaron Larson said.

In an effort to keep a level playing field, organizers decided to use a blind-draw format.

“I don’t care how many leagues you’ve won before, it’s a blind draw. Who knows, you may get stuck with me,” Larson said. “On the same token, you might get stuck with someone who’s very good, and they can propel you to the top.”

Through the third week of play, the format choice has been popular.

“The random partners makes it fair, and it’s the only one around like it,” said Cory Greff, who has played each week. “It’s a great thing to do on a Sunday afternoon.”

In addition to gaining points toward the championship — with a grand prize package of a set of boards and bags, an overnight stay in a two-room suite at America’s Best Value Inn and a $50 gift certificate to Big Island Grille and Bar — 100 percent of the $5 entrance fee is divided up to the winners.

If 10 or more teams sign up any given week, Larson said he’d throw the bar tab into the winner’s pot as well.

In preparation for the beanbag tournament and other outdoor events in the courtyard, Larson has been in charge of making improvements to the space.

“I’ve had trees removed and done some landscaping,” he said.

In case of rain, the tournament will go on inside the Land Between the Lakes Event Center. The event center is linked with America’s Best Value Inn and Big Island Grille & Bar. Larson noted that the event center has been the site of a 22-team beanbag tournament organized by a group from Jellystone Park near Austin, so a 10-team group should fit easily.

The beanbags are actually filled with corn kernels. However, Larson isn’t about to use that in the event title.

“Talk about cornhole, and you just get a whole lot of people giggling and not understanding what I’m talking about,” he said. “So, I say beanbag tournament, and people understand.” 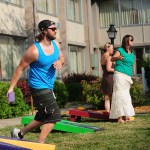 Tristan Sather of Albert Lea throws a bean bag, while Matt Peterson of Ventura, Iowa, waits for his turn during the tournament Sunday in the Big Island Grill and Bar courtyard. — Micah Bader/Albert Lea Tribune 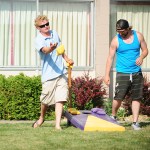 Matt Peterson of Ventura, Iowa, throws a bean bag, while Tristan Sather of Albert Lea waits for his turn during the tournament Sunday in the Big Island Grill and Bar courtyard. — Micah Bader/Albert Lea Tribune 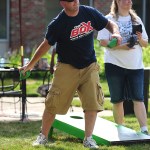 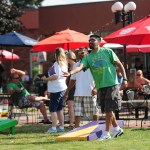 Pedro Olvera throws a bean bag, while Lennie Aguilera waits for his turn during a tournament Sunday in the Big Island Grill and Bar courtyard. — Micah Bader/Albert Lea Tribune