During summer in Albert Lea, it’s easy to spot grown-ups being active 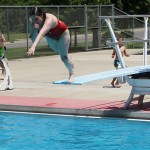 Andrea Dorman, 31, dives off a diving board Wednesday at the city pool. She said it’s a great way to stay cool on a hot day. –Tim Engstrom/Albert Lea Tribune 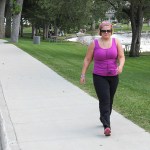 Jennifer Sorlie, no age given, walks around Fountain Lake on Wednesday. She said her Zumba class had a break because of the Independence Day holiday. 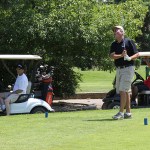 Wayne Thompson, 57, and his golf buddies look at his ball fly through the air after he teed off at Hole 13 of Green Lea Golf Course. 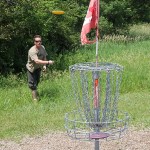 Trevor DeRaad, 45, makes a putt on Hole 9 of Tall Grass Disc Golf Course at Bancroft Bay Park on Wednesday. He said the sport is great for walking. 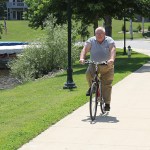 Tom Schleck, 67, bikes around Fountain Lake on Wednesday, which he said he does often now that he has the time in retirement. 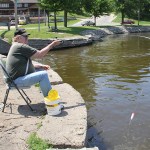 John Erlandson, 64, casts his line Wednesday at Fountain Lake’s connection with Dane Bay. He said the location is his favorite fishing spot. 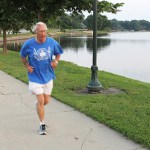 Rex Stotts, 70, jogs around Fountain Lake this morning, which he does seven days a week. “It’s done me a world of good,” he said.