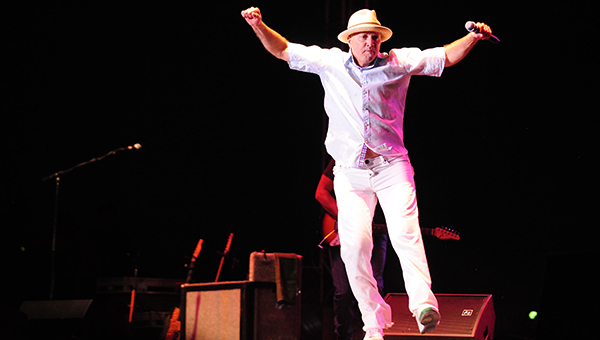 Scroll down for a gallery of photos

They’ve been doing it for 33 years, but you can tell it’s just for the love of entertaining more than any other reason. Freeborn County fairgoers were treated to a great concert Wednesday evening by Sawyer Brown.

At times it felt more like a comedy show than a country rock concert, but the fans loved it. Lead singer Mark Miller jumped onto the stage and dazzled the crowd with his wild dancing antics.

The first few songs were upbeat and included “Six Days On the Road” and “The Boys and Me.” They slowed things down just a bit with “Drive Me Wild” and “This Time.” Miller introduced “Cafe On the Corner” by saying “This one’s for all those farm boys and farm girls.”

Other songs included “The Walk,” “This Thing Called Wantin’ and Havin’ It All,” “Hard to Say,” “This Night Won’t Last Forever” and “All These Years.” After “All These Years” Miller thanked the crowd for “hootin’ and hollerin’ for a song about adultery.”

“Don’t act like some of you were here,” Miller said. “We’re going to play ya’ll 33 years worth of music tonight.”

After “Mission Temple Fireworks Stand,” which included some audience participation, Miller said he wanted to do a little survey and asked if anyone in the crowd had ever been to a Sawyer Brown show before.

“If you have never seen us we’re going to have to go way back,” Miller said. “I tell my kids we were the original ‘American Idol.’”

Sawyer Brown got its big break in 1983 by winning the TV show talent contest “Star Search.” Keeping true to their main goal of entertaining, the band played some of its older hits, which got lots of cheers from the crowd. Titles included “Step That Step,” “Betty’s Bein’ Bad” and “Heart Don’t Fall Now.”

Miller then said he wanted to come all the way forward and play some new tunes. The band released their 23rd album “Travelin’ Band” in 2011. They played the title track “Travelin’ Band,” a song about their journey as a group, and “Smokin’ Hot Wife,” a song Miller said he wrote to appease his wife’s desire to have a love song written about her.

“She loves that song,” Miller said with a grin.

Miller then told the crowd the band was honored to be asked to play at the Country Music Hall of Fame’s induction of Alabama and said they wanted to play the song again. It was “Dixieland Delight,” and the crowd cheered and sang along.

After playing the band’s classic “Dirt Road,” keyboardist Gregg “Hobie” Hubbard surprised Miller by grabbing the microphone and crooning a cover of Joe Walsh’s “Life’s Been Good.” At one point he even teased Miller’s dancing, copied MC Hammer’s dancing and tried Riverdance. When Miller was ready to take back over after that tune, lead guitarist Shayne Hill grabbed the microphone and led the crowd in singing “Rock ’N’ Me,” a Steve Miller Band cover.

Finally Miller got his microphone back and the band finished out with “Race Is On” and “Thank God For You.” When the crowd called for an encore they came right back on to play “Some Girls Do” before thanking the crowd and saying goodnight. The crowd of men and women, both young and old, seemed genuinely entertained by Sawyer Brown and the group’s energy and passion. 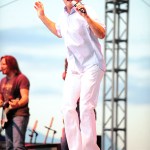 Mark Miller, the lead singer of Sawyer Brown, jumps up and down while he sings to the first song of the band’s performance in Albert Lea on Wednesday. — Brandi Hagen/Albert Lea Tribune 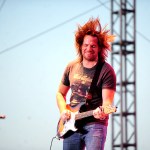 Shayne Hill, the lead guitarist of Sawyer Brown, flips his hair back as he plays a solo at the beginning of Wednesday’s show. — Brandi Hagen/Albert Lea Tribune 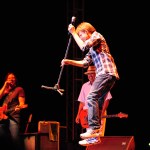 Gregg “Hobie” Hubbard, Sawyer Brown’s keyboardist, breaks out into dance as he took the spotlight Wednesday to “Life’s Been Good,” a song originally by Joe Walsh. — Brandi Hagen/Albert Lea Tribune 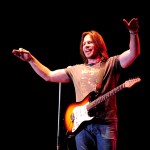 Shayne Hill conducts the audience to sing along to “Rock ‘N’ Me,” a song originally by the Steve Miller Band toward the end of Wednesday’s concert by Saywer Brown. — Brandi Hagen/Albert Lea Tribune 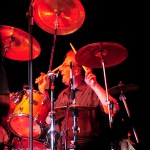 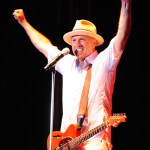 Mark Miller, the lead singer of Sawyer Brown throws his arms up in the air after telling Wednesday’s fair crowd that the band has released 23 albums in its career. — Brandi Hagen/Albert Lea Tribune 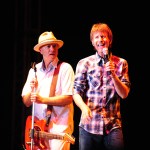 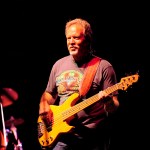 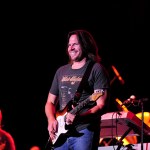