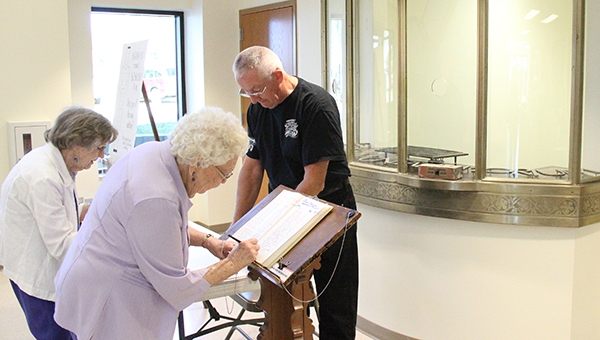 People had the chance to celebrate and view new and expanded exhibits during a grand opening at the Freeborn County Historical Museum on Sunday.

The museum is nearly put together after a two-story expansion that doubled its size. Executive Director Pat Mulso said it feels great to let the public see the results of work going on since a groundbreaking in May 2012.

“There are lots of little details,” Mulso said. “There’s a couple of exhibits we’re still working on.”

One is the exhibit that will face both the inside of the museum and Bridge Avenue. Mulso said she want to remodel the old front entrance to make an exhibit people can see from the street. She hopes that will be completed by November.

A room full of trains and train sets is still being worked on, and Mulso said there will be some printing presses to be added. There is a bit more work to be done to the archive area, too. Even though there’s more to do, Mulso said it’s good that so much has been done in the last year.

Mulso said the new meeting rooms have been used for class reunions, a birthday party and other get-togethers. It’s also booked for a graduation party next year.

Mulso said the expansion couldn’t have happened without all the volunteers who helped move items and who did painting, flooring and cleaning. She also thanked the museum’s board of directors and the building fund committee.

One volunteer, Keith Fligge, said it’s important to know there’s still a bit of fundraising to do. The museum’s expansion cost $1.7 million. A loan was taken out so that all the work could be completed, and only $1.4 million has been raised.

Fligge said the museum is a great asset to Freeborn County not only for its research area and archives but also for the benefit to area children. Fligge said children come to the museum on school trips, and now they will benefit from the Betha and Oscar Larson children’s learning lab. Only one other area of the museum has a new name, and that’s the Kevin Savick Business History Research Area.

“This is a wonderful thing to have,” Fligge said. “Pat and the staff have done a wonderful job.”

Fligge said his favorite addition is the ticket booth and artifacts from the Cap Emmons Auditorium, which was part of the old high school building on Clark Street.

“It brought back memories,” Fligge said.

Board member Phil Hintermeister said his favorite new exhibit is the Marion Ross room on the lower level of the new addition. He said the staff developed a nice display about Ross’ life.

Two women who came to the grand opening, Dorothy Gulbrandson and Phyllis Bergeson, said they were curious about the expansion so they wanted to come see what the museum looks like now.

“It’s interesting to see the past,” Gulbrandson said.

The grand opening was an open house from 2 to 4 p.m. Sunday. There was no cost to attend. The museum is also much more accessible with a ramp to its front entrance and an elevator.

More about the expansion

Mulso said she’s excited to showcase larger items like the Col. Albert Lea statue and Cap Emmons Auditorium seats that were both taken from the old high school on Clark Street.

That exhibit will also include the museum’s music-themed items. Also on the upper level of the expansion there is a full caterer’s kitchen and large meeting room that can be split into two areas and rented out. There were no changes to the village, other than that it’s more visible now from inside the museum.

Mulso has an office upstairs and a meeting room. There are restrooms on both levels of the new addition. The new elevator, which will make the entire museum wheelchair-friendly, and a large staircase join the upper level to the lower. The lower level includes the new main entrance, which has a new sidewalk leading to additional parking.

Also on the bottom floor is a kids’ learning lab, where children can create crafts and get messy without fear of harming exhibits. The lower level will have a reception area and house the library and archives. It even has a separate “isolation” room where staff can clean donated items found in barns, sheds and attics. A special room that will house the gift shop has flooring tiles from the 1884 Freeborn County Courthouse. 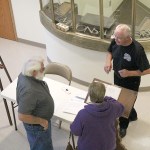 County museum board member Phil Hintermeister greets guests during a grand opening for the new addition at the museum. Behind Hintermeister is the ticket booth and other artifacts from the Cap Emmons Auditorium, which was part of the former high school building on Clark Street. 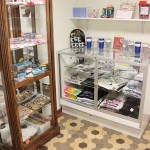 A small gift shop is part of the new addition at the county museum. The shop has a historical feature, too. The flooring tiles are from the 1884 Freeborn County Courthouse. 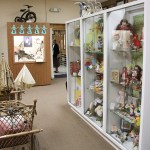 What was formerly the library area is now home to some of the museum’s large doll and toy collection. 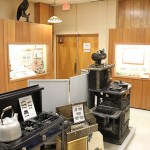 Exhibits now stand where the former front entrance of the museum was. Many exhibits have been moved or expanded with the additional space. 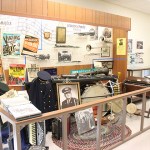 A music exhibit has a new home in the Freeborn County Historical Museum. 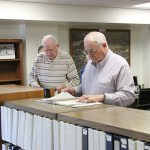 People look through books and artifacts in the new library at the county museum. 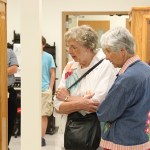 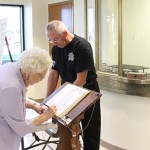