Shifting to the water 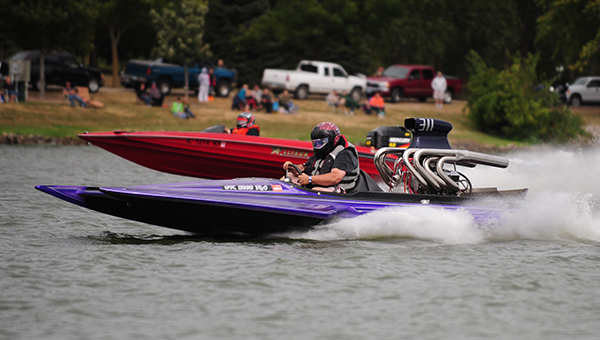 The rumble and pop of high-powered engines could be heard Saturday across the waves on Fountain Lake.

About 30 drag boat drivers from the Midwest put the pedal to the metal in six divisions.

“It’s great that we have something like this in town,” said Randy Andersen, a spectator from Albert Lea. “We’re lucky enough to have these lakes, and it’s good for the community.”

The Upper Midwest Power Boat Association, a nonprofit organization, set up the races, which were free to the public. UMPBA president, Scott Kalash, estimated about 300 people attended the event, which took place in Albert Lea for the second straight year.

Among those on the shoreline were Donna and Bill McDermott of Waterloo, Iowa. The couple watched drag boat races in Independence, Iowa, but this was their first trip to Albert Lea to see the competition.

“I enjoy watching anything that’ll go fast,” Bill said. “I just like the speed.”

While spectators enjoyed the action, a flurry of activity happened on the water. Kalash not only managed the ramp to get boats in and out of the water, he also competed in the the Lake Racer 4 category for boats between 96 and 105 mph. He won once and lost twice.

“It’s pretty time consuming, and it can get overwhelming at times,” Kalash said. “But when it’s all said and done, you see the smiles on people’s faces, and it makes it all worth it.”

Kalash was referring to people like Jordan resident Roger Sparrow. Sparrow is a former dragster who shifted from the track to the water along with his ride.
Sparrow’s Sanger boat has a 468-cubic inch big block engine from a 1974 Chevy truck, he said.

“Water is more fun than drag racing with cars,” Sparrow said. “You don’t have to worry about as many things. Boats are more consistent, because water has the same density.”
The winners were rewarded with bragging rights.

“There’s no payout. No prizes,” Kalash said. “We keep it really simple. It’s just for fun.”

The UMPBA wanted to make the races as safe as possible, so only drag boats were allowed on the drag strip. Otherwise, waves could make the water choppy and boats might go airborne at high speeds, Kalash said. An ambulance and the Freeborn County sheriff’s boat was also present as a safety measure.
Visit umpba.org to learn more about the organization and get updates about upcoming races. 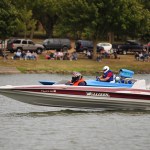 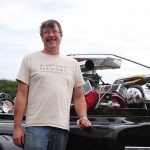 Roger Sparrow stands in front of his Sanger drag boat. Sanger has a crew of 12 people who help maintain his ride. The boat is powered by a 468-cubic inch big block engine out of a 1974 Chevy pickup. — Micah Bader/Albert Lea Tribune 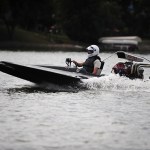 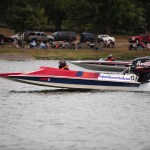 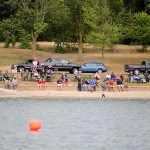 Spectators wait for the next drag boat race Saturday on the shore of Fountain Lake. — Micah Bader/Albert Lea Tribune 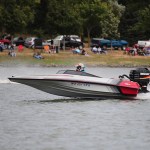 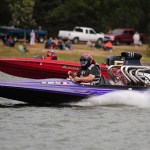