Gallery: Rendezvous in the rain 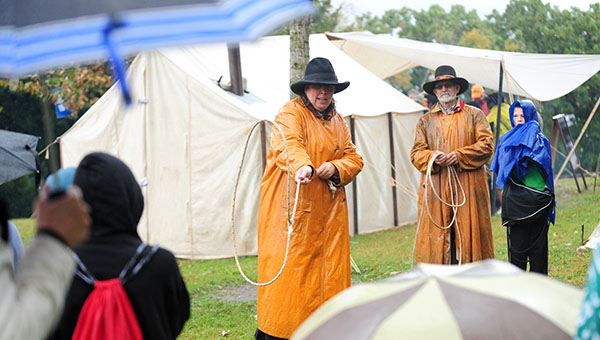 Students dressed in raincoats and holding umbrellas watch Lucy Mulholand of Oklahoma City, Okla., perform a rope trick during a school field trip to the Big Island Rendevous on Thursday.

Drenched from head to toe talking to their friends about their wet socks or wet pants, almost 1,400 students from around the region visited the Big Island Rendezvous on Thursday at Bancroft Bay Park.

They built log cabins, plugged their ears and watched as a musket and cannon were shot, learned about pirates and watched blacksmithing, among other skills from the pioneer days.

One of the stations the students visited was Houston resident Bruce Langseth’s. This weekend, Langseth will be doing a medicine show, but during Education Days Langseth taught students about homesteading and log cabins.

He told them how in the pioneer days people could get 168 acres of land for free if they put up a dwelling with a door and glass window.

Langseth gave the students two choices as they made their scheduled stop at his station. They could either get out of the rain and stand under the awning and listen to him talk or they could stand out in the open and build a log cabin.

“They said, ‘We want to build,’” Langseth said.

The students, with Langseth’s help, first took apart the 32-log cabin, and then he let them put the puzzle-like structure back together by themselves.

“If you keep them busy and get their hands going, they are going to remember better,” Langseth said.

Even though being drenched and out in the rain wasn’t much fun, most of the students embraced the experience because as Langseth pointed out, the pioneers would have had to deal with the same situation.

“It’s just water,” he said. “Once you’re soaking wet you don’t get any wetter.”

At another station, students cut corn off of the cobs and learned how to grind it up into flour.

Brooklyn Hansen, of I.J. Holton Intermediate School in Austin, said it was fun, but hard because the tools made from animal parts weren’t very sharp.

Hansen’s mom, Lou, said the field trip was not only exciting for the students, but also for herself.

“Coming with the school, I’ve enjoyed myself more than I have in the last 10 years that I’ve been coming to the Rendezvous,” Lou said.

The reason was because she actually stopped and listened to the presentations at the stations.

The other station that Hansen really liked was one where the students were shown rope tricks by Lucy Mulholand of Oklahoma City. Two of the tricks Mulholand demonstrated were the butterfly and the wedding ring. She explained how they were trickier than usual because her rope was wet from the rain.

Many demonstrators found the same to be true. The rain was bearable, but it caused hiccups with the demonstrations.

For example, during a demonstration at the blacksmithing station, John Debnam, of the Twin Cities, couldn’t show one group what he had planned because a heavy downpour put out the fire.

Still, Debnam said students had good questions, and when the fire was going they were impressed by how hot the metal got and the bright orange color that was emitted.

Another group of about 1,400 students will attend Education Days today. The Big Island Rendezvous is open to the public at 9 a.m. on Saturday and Sunday. Tickets are $12 for adults, $7 for ages 6 to 11 and free for children age 5 and younger. 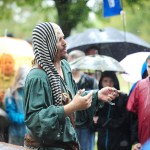 A man talks to students about pirates while standing in the rain Thursday at the Big Island Rendevous. 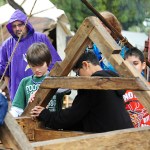 Students from I.J. Holton Intermediate School in Austin put together a log cabin Thursday during a field trip to the Big Island Rendevous Thursday in Albert Lea. 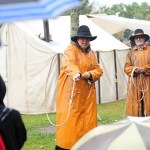 Students dressed in raincoats and holding umbrellas watch Lucy Mulholand of Oklahoma City, Okla., perform a rope trick during a school field trip to the Big Island Rendevous on Thursday. 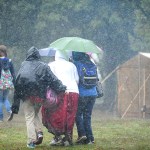 Students walk through mud puddles and a downpour Thursday during a field trip to the Big Island Rendevous at Bancroft Bay Park. 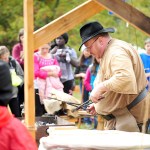 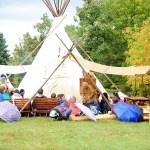 A woman tells a story about a buffalo to students during school day at the Big Island Rendezvous on Thursday. 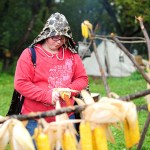 Brooklyn Hansen, from the I.J. Holton Intermediate School in Austin, cuts corn off the cob using animal bones as a scraper at the Big Island Rendevous on Thursday. 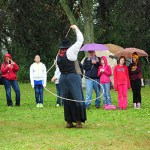 Lucy Mulholand of Oklahoma City, Okla., does a rope trick called the wedding ring for students of Austin’s I.J. Holton Intermediate School on Thursday at Bancroft Bay Park. The Big Island Rendezvous kicks off for the public on Saturday. –Brandi Hagen/Albert Lea Tribune