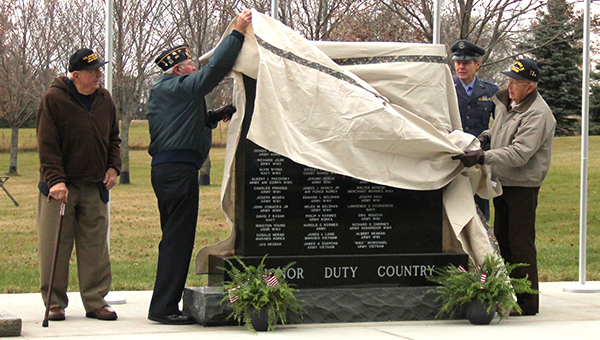 MYRTLE — Three cousins wished to see a veterans memorial built, and that wish has finally come to reality.

Sadly, only two of the three cousins were able to see it brought to life. Veterans Emil Pranter, 93, of Austin, and Ernie Benesh, 86, of Owatonna, attended a dedication ceremony of a new veterans memorial at the Bohemian National Cemetery on Saturday. Their cousin Milo Belshan helped with the idea, but died in April of this year.

“I wish Milo would have been here,” Prantner said.

Milo’s son, Dan Belshan, and his wife, Bonnie, helped with the memorial, and Prantner said he appreciated their help very much. And while there are still a few small things to add, Prantner is glad the memorial is in place. 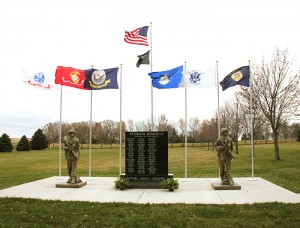 A new veterans memorial stands at the Bohemian Cemetery near Myrtle.

“It took us quite a while to get all that money together, but we had a lot of help,” Prantner said.

Many fundraising efforts have been done including a sloppy joe meal, a pancake breakfast and a kolache bake sale. In February the Glenville area Women of Today applied for a National Society Daughters of the American Revolution special projects grant. The funding from the program is awarded to support projects in local communities that promote the organization’s mission, areas of historic preservation, education and patriotism.

In June funding for the project was made possible through the sponsorship of Anthony Wayne Chapter, National Society Daughters of the American Revolution in Mankato. The chapter’s funds were matched by the special projects grant donation of $10,000.

Members of the DAR were present Saturday at the dedication ceremony. The Glenville-Emmons High School band played the National Anthem and a patriotic medley of songs. Linda Kral with the Glenville Women of Today spoke and said the memorial honors the service of all veterans.

“Because of their service to our country we can enjoy the freedoms we have today,” Kral said.

After the new monument was unveiled, the crowd of about 90 people were invited to refreshments and fellowship at the Myrtle Brick Hall. Francis Kycek, who belongs to the Brick Hall group, said she is glad the veterans are being honored.

“I think the veterans really deserve this honor after all these years,” Kycek said.

Kenny Elson, a Vietnam veteran from Northwood who is a member of the Glenville American Legion, attended the ceremony and helped unveil the new memorial. He said he is glad to have the memorial at the cemetery.

Belshan was the emcee for the event on Saturday and said he is glad his dad’s wish of the memorial has come true.

“I’m very pleased we completed this in a year,” Belshan said. “And that the community came out and supported us.”

There are 57 names on the memorial now, and more can be added. The three cousins started the memorial project because there were already 45 veterans buried at the cemetery, and they wanted a way to honor them.

The memorial includes a 9,000-pound monument and two life-size statues. There are also flags depicting the branches of military service. Prantner said they’re still fundraising to install benches and a few other final touches.

All three cousins served in World War II, though in different capacities. Benesh was a Marine who fought in Guam and Iwo Jima. Prantner was in the Army; he landed at Normandy and also fought in the Battle of the Bulge. Belshan was also in the Army; he fought in several battles in Papua and Dutch New Guinea. 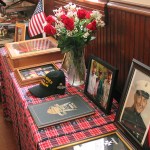 Myrtle’s Brick Hall is decorated with artifacts and mementos of the three cousins who worked to get a veterans memorial built. 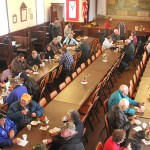 Myrtle’s Brick Hall fills up with folks on Saturday after a dedication of a new veterans memorial at the Bohemian National Cemetery just north of the hall. 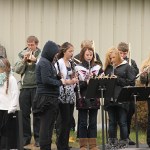 Band members from Glenville-Emmons High School perform a patriotic medley during a veterans memorial dedication ceremony on Saturday near Myrtle. 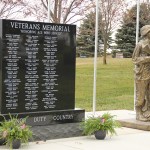 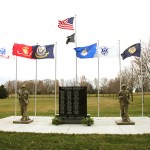 A new veterans memorial stands at the Bohemian Cemetery near Myrtle. 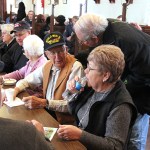 Veteran Emil Prantner visits with friends and neighbors at the Brick Hall near Myrtle after a new veterans memorial was unveiled at the Bohemian National Cemetery. 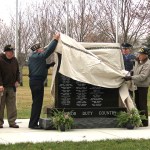 Veterans unveil a new memorial at Bohemian National Cemetery near Myrtle during a dedication ceremony on Saturday.